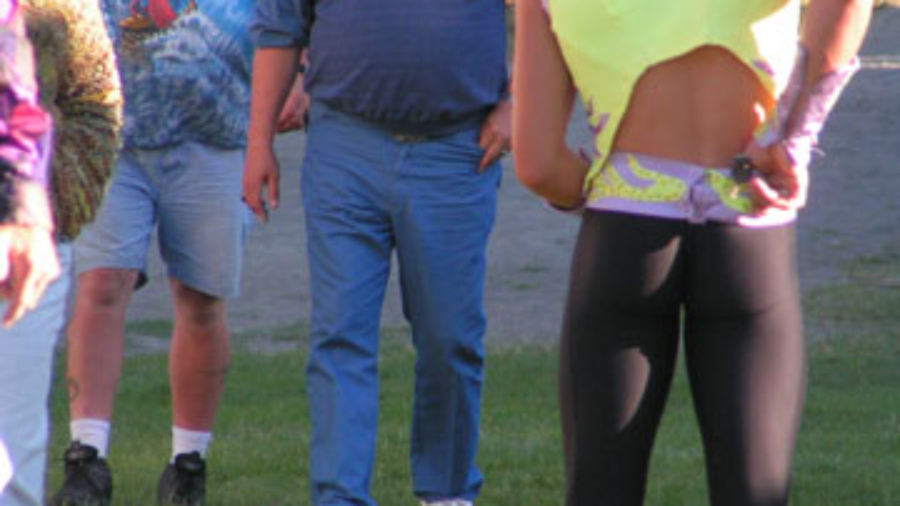 It’s still fresh in my mind the intense South American circus we went to last Wednesday here in town. It was a circus of the “Yanni music coupled with semi-erotic acrobatics” variety, as opposed to the “sad animals who look like they want to die” type. My first circus ever, incidentally, and my children’s as well.

Spandex somehow scares me, even if you have a perfect ass. However, if anyone is entitled to wear it I suppose circus performers have earned that right due to their physical fitness and necessity for freedom of movement. I sniggered as I took this picture (about fifteen minutes before the bigtop show), but I later fell in love with this boy. His name is Agostino and he is a lithe young Venezuelan capable of numerous impressive death-and-fashion-defying moves and yes, I had to scream and hide my eyes as he cavorted atop the Wheel of Destiny. Please note American males on stage left whose apprehensive expressions indicate either A. the white man’s perennial distrust of the Latino male; B. a latent homosexual attraction to this nymph-like circus youth; or perhaps C. they are merely looking for a good caramel apple on the midway.

Before the waking coma commenced. My children were calm and excited before the show started, but the minute the fog machine started rolling and the music started blasting and the glittery costumed were-ninjas were flying about, they entered this odd trance-like state and stayed that way for the whole 120 minutes. Their sweet, befuddled expressions seemed to say, “What the fuck is going on?” Ralph joked the next morning they probably remembered the whole thing like some weird nightmare.

We were afraid to use any flash photography as it honestly looked like the cast and crew would kick our asses if they caught us. This hula-hooping boy is the son of Olga, the Russian magician of the circus. He pulled hula hoops out of thin air and looked like one of the Sharks from West Side Story dressed in the Judas costume from his last number in Jesus Christ Superstar (oh come on, you know what I’m talkin’ ’bout!).

And speaking of kid-intensity, on Saturday we took The Girl to the new Charlie and The Chocolate Factory. Funny thing is, I hated the original movie (sad and weird, but not in a way I liked) and didn’t care much for the story, either (my love for Johnny Depp, however, continues to stand the test of time). Sophie enjoyed the film but found it hard to follow (and thereby contributed numerous inappropriate out-loud theater comments such as, “Hey, it’s chocolate!”). We left the theater and she looked at her daddy as he carried her in his arms and said, “What happened in there?”