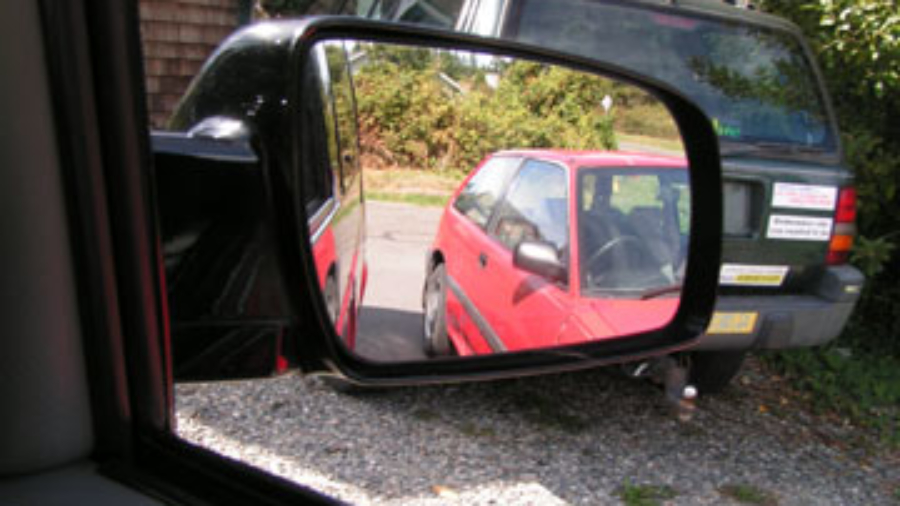 Our little Honda moved on to another family this afternoon, now to serve as my friend Steph’s “run-around” vehicle. This was the car I bought for my husband in June 2001, pregnant with our first child and gifting him with the best vehicle I could manage under the circumstances. It was our first “family car”, pathetically because it actually had a backseat to accommodate an infant carseat (which our Mazda truck has only in the legal sense, really). Bright red, which I always loathed, but the price was right and I bought it from a coworker and had it paid off in no time. We brought Sophie home from the hospital in it and I first car-nursed her in the front seat a month later on the trip down to my parents’ as a young family for the first time. I also pulled my oldest in and out of the carseat while grossly pregnant with Nels and even had both kids in the car for a month or so before we got Astrid, our can-do-green family van.

One of our fondest memories (which happens to be car-related, so I will share here) was Mother’s Day 2004, when we went on a hike with Olympic Wild up in the God-knows-where mountains and there, in the middle of pristine wilderness with our two young children in tow (Nels barely a month old) our muffler clean fell off in the middle of some road marked FS 4317 or something like it. The muffler had been making funny noises on the rather lengthy ascent and finally just gave in and dropped trou. The man orchestrating the hike saw our dilemma, pulled his van over, and kindly lept to our rescue with a sturdy and serious job rewiring the muffler to the car, perhaps partly in stewardship to the Mother Nature we had all come together to experience and worship. The baling wire held for over a year and is still what’s keeping the muffler on (truth be told, it is rather scraps of muffler at this point). I am assuming the new owners will want to shell out the $125 to make a real repair but, until they do, I can always count on knowing when our former transportation is in the area by the lovely distinctive song it sings.

About five minutes ago as I typed this I heard a knock at the door and ran to answer it. Who could be calling at this hour? I ask myself – squinting at two form outside. I open the door to find two well-dressed young men in ties and tucked-in shirts and exclaim, “Ralph, I think we have some Mormons on our porch!” adoringly, like someone seeing a Mommy duck with her babies waddling by the side of the road. The Mormons in question take this in stride, the one in front nervously chuckling and the one behind looking a bit surly. I am fascinated by Mormons and far from being irritated when they (or Jehovah’s Witnesses, or any of those so-called “cults” as we so insultingly call them) knock on my door, I am amazed and perplexed at what could keep them calling on so many irritated, unwelcoming, and sometimes hostile homes.

Sadly, we don’t have much to offer these two young hopefuls. We gave the Mormons a shot last summer. We’ve been through enough Mormon boys to feel we could start a dating service… Elders Simpson (now based in our hometown, last we heard) and Venstra (who could rodeo-rope like no one’s business) were our favorites … we also met an Elder Hindman who was very polite indeed and another one (can’t remember his name) who looked like a caveman and actually threw a rock and killed a bird (accidentally) while on Fort Worden with Elder S. We made friends with, actually had to dinner and went on hikes with, some of these young men. Heck, I even read the Book of Mormon because who am I to be a religion snob if I don’t know much about the religion? Anyway at the sight of these young men I felt a sense of familiarity and comfort, even as I heard my husband (politely) ask to be left off their next circuit of visits. One reason I love my husband is he is not afraid to talk religion and he’s not rude to those whose beliefs he doesn’t prescribe to.