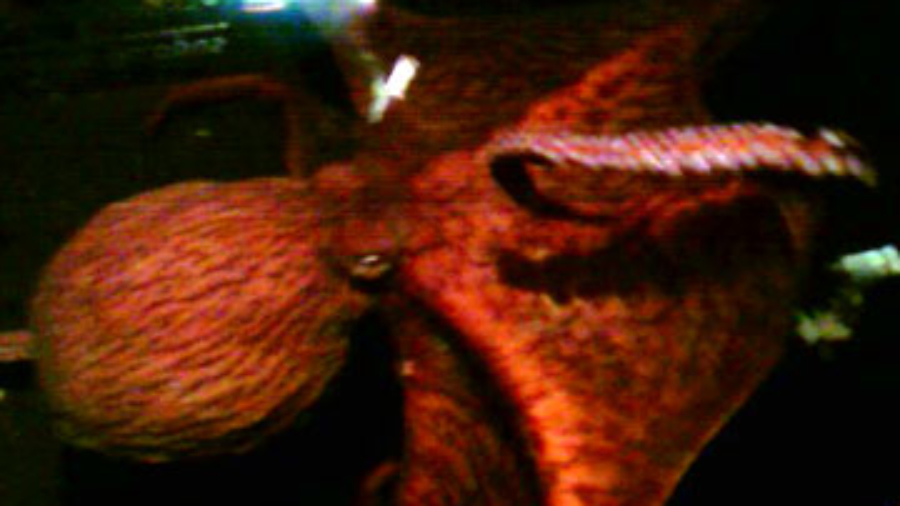 This afternoon as soon as my parents headed back up to their humble burg, we hit Seaside and the Aquarium. This particular aquarium has a creepy, vaudeville feeling to it (as compared to our own marine stewardship model here in PT). However, our daughter has been talking about this particular venue for a year straight so, in the interest of family-traditions-everyone-does-even-if-they-hate-them, we hit it, Hogaboom style.

The Pacific Octopus was bizarre, unworldly, and beautiful. In the true spirit of tourist-attraction cruelty the aquarium allows this octopus nothing in the form of shelter so it is forced to be exposed to the gawks and prods of yokels such as myself. There is a sign reading, “Don’t Touch the Octopus”, although I simply cannot imagine someone actually voluntarily reaching in to this creature’s lair. For one thing, it is massive – probably about 12 feet long if the tentacles were stretched out – and it has a look of evil alien intelligence. My oldest child was politely concerned about the grabbing potential of the creature, and no wonder.

Sophie’s favorite creature, however, is Victor (forgive the shitty nature of the photo – we were using a camera phone and there is a pane of glass in between the wary child and the sea monster therein. This lady took a better photo, BTW).

Anyway, Victor is the 28 lb. much-beloved (and now mummified) lobster of the Seaside Aquarium. His claws are almost as long as my child’s arm. Oh, and speaking of reaching into the tank of a scary sea animal? Victor’s demise, sadly enough, had to do with just that. Ten years ago some drunk dude was peering in the tank and thought, “Hey, free lobster!” He tucked the thing under his arm and ducked out into the parking lot. In the ensuing high-speed chase the poor thing’s shell was cracked and he died a day later.