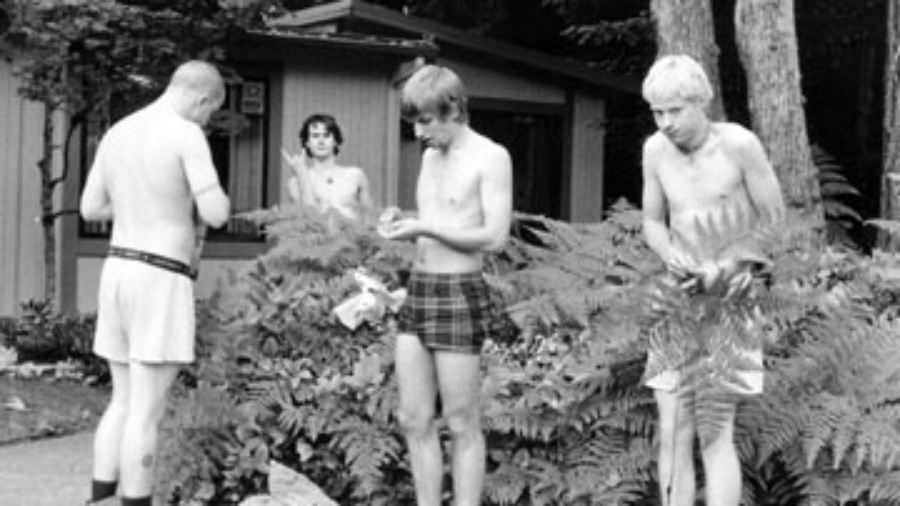 Happy New Year! This year we rang in the change with friends, babies up too late, mild substance abuse, and fresh scalp lacerations. Oh well. I just can’t party as hard as I used to.

^^ Can you guess which one I’m married to now? ^^ The above picture was taken about two minutes before Ralph and I started dating, in his brief stint at Evergreen. Our friend Brummel is center stage and, dear me, those boxers leave little to the imagination. I’m told B’s banana-suit from the same days of yore (used for breakdancing, so he says) was simply breathtaking.

< -- Let's get a closer look, people. This was Ralph about 25 pounds ago, before he worked a job requiring khaki pants and before he grew fur all over his body (that is not a shaved chest, people – that was how God made him back then). Before he discovered he was amazing at tinkering with technology and, in fact, before he knew the difference between a Mac and a PC and why Linux is superior in theory but will bore the tits off any non-Linux user should you choose to elaborate on that premise at a party (and he often does choose to do so). This is before he kneeled on my kitchen floor with a ring in hand, before those hands had held my own through birthin’ two of his babies, even before he knew me as Bird. Before he could learn to change diapers, read bedtime stories, and mow the lawn with two children strapped to him (true story) and before he felt the crushing power and responsibility of a wife and little ones. This is the boy that exists inside him even today, no matter what he sometimes fears. This is the boy who became the beau who became the man I married.

Enough schmaltz down memory lane. So, last night in our festivities I had a toddler vs. Bloody Mary moment and ended up with a pint of the stuff on my shirt. I stripped down and borrowed my girlfriend’s t-shirt (“Mustang Ranch – Where Quality Keeps Them Coming!”). It was one of those fabulous t-shirts worn down to skinlike softness and I am so sad because I own no such loved shirt, so much as the dismal hodge-podge of cast-offs and ill-fitting freebies. One day, in my not-too-distant future, new clothes are in my future (“new” to me, at least). For now, I occasionally steal them from friends, for a few brief hours.