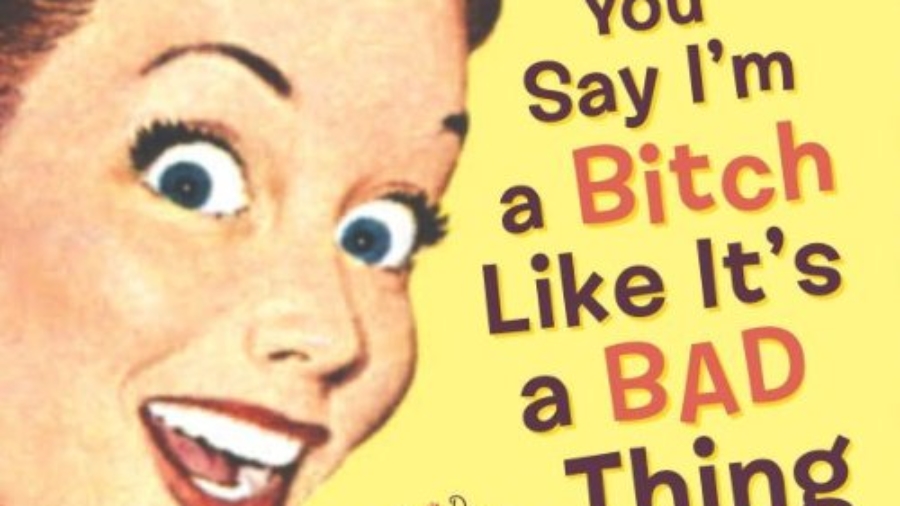 I can remember very clearly the last time someone called me a “Fucking Bitch” (it was about five minutes ago, har har). Anyway, I think this person thought they were saying something quite shocking. But the truth is, that particular phrase doesn’t push my buttons. Having someone call me a “fucking bitch” (or any variation thereof, and even in jest) is like hearing, “Hey, my ass is on fire!” I feel mild surprise and a vague investigative curiosity, but it strikes very little relevance to my feelings.

Now – I will getting around to discussing whether I am, in fact, a bitch or not. But before I go into that, I can’t help but think how that word has changed much in the last decade or so. See, when I was growing up, it was a Big Fucking Deal. “Bitch” was a powerful word, and it was the last word. If you got in a fight with your pimply boyfriend (wearing a side-spike) and things escalated to the point where he called you a bitch – well, a breakup was probably in the cards, and you were going to go home and listen to Poison’s “Every Rose Has It’s Thorns” and call your girlfriends on your Swatch phone and generally feel miserable. What I mean to say is, “bitch” was a dealbreaker, a horrible sin to be accused of. It was powerful, too. You didn’t get to retort, “Hey! No, I’m not a bitch.” You were, if someone said you were. Those was the rules. If someone, most especially a male, called you a “bitch” – poof! – the Bitch Genie popped out of his lamp and blessed you with your a big, fat PMS-y crown reading, “Bitch and Pariah”.

Well, I don’t know how 15-year old girls and their boyfriends fight these days, but that word just doesn’t ring the way it used to. To quote the bumper sticker: “You say I’m a bitch like it’s a bad thing.” When I hear a woman describing herself as a bitch I automatically project my meaning onto hers: “I’m speaking my truth / being myself in a way I was taught not to do.” (implied is the statement – “and I honestly don’t know if it’s OK or not!”) Now conversely someone who, in anger, tells a woman she’s being a bitch is saying (to my mind), “You are making me uncomfortable and I’m going to be mean to you because of it!” (by the way, this is the real statement behind a multitude of insults!).

Of course, the legacy of “bitch” and all it entails surfaces among decidedly non-bitchy women and in patently nonconfrontational examples. For instance, I was just at a holiday gift exchange this evening and six out of seven women in some way apologized for the gift they brought! Six out of seven!

And you know what’s fucked up? I was one of them. And this was after I’d noticed, out loud, the trend developing amongst my friends. And not only that, but the woman who pointed out I had violated my own policy said in an undertone, “I know what you mean, though – I have my apologies for my gift [as yet unopened] marshalled.” Hey, you know what happened about three minutes later? You guessed it – as her present was opened by her gift-ee, she started in on the apologies and qualifiers! I am not making this up, people!

My point is – as a female, the reason we’ve given “bitch” an overabundance of power – whether now or in our past – is because we’ve bought into the ideas that A. we can’t exercise the non-saintly aspects of ourselves (brash, confrontational, socially inept); B. what we have isn’t good enough (hence the gift apologies); and C. that we value others’ opinions (namely, our partners’) over our own. It’s lame.

And for the record, when I call myself a bitch? I’m saying, “Listen up, people – this is who I am right now. What do you think? I’m genuinely curious.”

And by the way – Linda, you rock. Not just for hosting our event of course, but for being the only woman who gave a gift, knew it was cool, and just let it be that and let the recipient enjoy it.