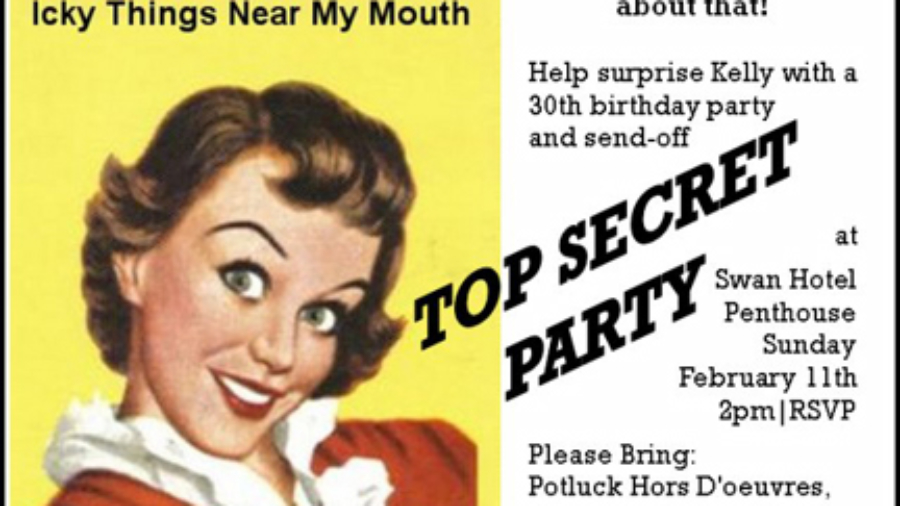 I’m not sure how to express the deep shock I felt yesterday when I followed Cynthia and Paige up to the penthouse of the Swan, they opened the door, my mind stuttered and hitched when I saw the fabulous cake on the table (lovely custom cakes that have price tag minimum of $250), and suddenly people sprang out from the balcony and yes, yelled “Surprise!” and I saw all sorts of smiling faces and next Molly was walking toward me with a hand-embroidered handkerchief. I couldn’t have been more surprised unless someone jumped out of the cake. Because even as I mounted the stairs behind Cyn and Paige knowing something was up – sure, a ladies’ lunch with a half-dozen girlfriends – nothing prepared me for how many people and how lovely they all looked to me. And yes, I cried (“Goddamn it!”) but part of it was just overwhelm – the party following one hour after I heard my cat had been murdered by a coyote, turning thirty, seeing my family who I was sure were 120 miles away. I was just floored.

The afternoon / evening was a lovely one and included many lovely goodies* (homemade hummus from Becca, Abbi and my current favorite meatball recipe, truffles and Poison Pussy Pie, this crazy bacon / date / almond appetizer from Nancy), fresh coffee and my favorite beer, my husband waiting on me hand and foot and the kids were out with a babysitter (everyone’s were, in fact), a cigarette with Sara and Steph and Molly, gifts – all of them either homemade, very special, or both.

My friend Cynthia was the lead organizer, in close cahoots with my husband and friend Abbi. Cynthia announces to me around the table I am “very difficult to plan a surprise party for” because I am “suspicious” and “not compliant”! I don’t know why everyone laughed at that one, but they sure did. The rest of the event I was told a handful of stories where my (I swear!) innocent curiosity caused friends and family to sweat bullets as they tried to keep the lie going.

Today is an extension of the fun as I am treated to the 41 gmail messages between my husband and the organizer(s) – this doesn’t count chats, of which Ralph tells me there were many. Example:

Jan 27
Ralph Hogaboom
to Cynthia
Kelly’s on to you (not me). She’s talking to her mom right now, saying
that you just ‘accepted’ the lack of party. she’s saying that she
expected you to be a little pissy, or put up more of a fight. Your
radio silence about it is clueing her in!

Feb 10
Ralph Hogaboom
to Cynthia
Kelly locked in 2 pm with me. I made some noises about her going out AGAIN, but that I’d take the kids up to fort worden or something. That gives me an excuse to get them out early (i.e., go pick up Rachel). I’m coming back from picking her up at 1:30; I’ll drop her, kids, and jogging stroller off at Grant Street and head on down to be there early. So, FYI, no Freecycle Documentary story, it’s “Fort Worden with the kids”.

I did the smallest bit possible pouting about how lame I am for not doing anything for her bday. She bought it! Heh.

You get the idea.

Then there’s the Google spreadsheet of Ralph’s where I can see the chronicles of my husband and dear friend assimilating the right guest list and sorting out email invitations (see above). The “Notes” field of each entry contains text like “Friends with Kelly from the mill”, “… ’cause Kelly has that love/hate thing going on with him!”, and “INFANT” (is that a warning or what)?

This morning my bath at the penthouse featured such a large tub I could literally float in it. My FOO left and my children and I had a lovely breakfast together at the Blue Moose with Abbi and Rosie, a walk down at the Marina, then home. Home for a cleanup, pajamas, movie, and yes – a nap. Sophie, Nels and I. I needed it.

* The food and drink were so good, in fact, they kept one person up all night and sent another to the hospital with acute gastritis, and I’m not kidding about that. P.S. that guest is doing just fine now.