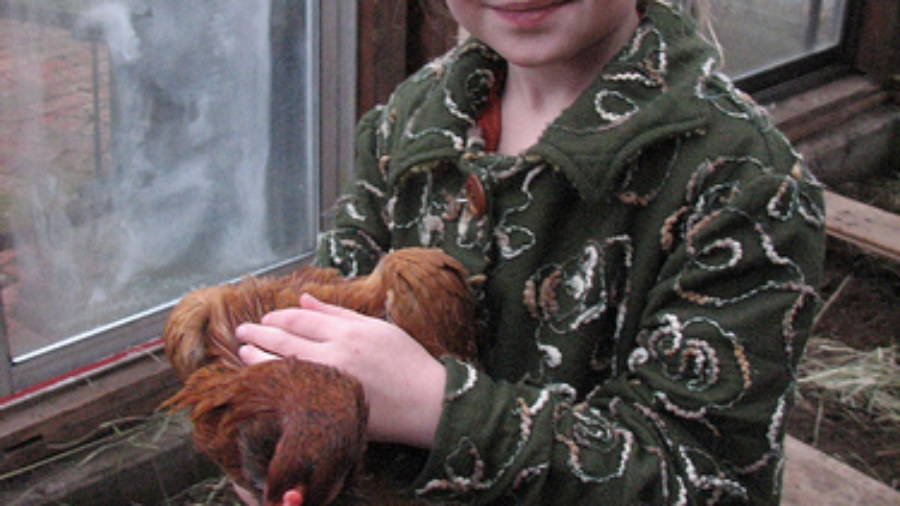 I find our pets (currently: two cats, two chickens) immensely amusing; I’m aware that I can only do so in part because A. they’re healthy and B. I feel good about the care we’re giving them. Most of my time with them I’m laughing at their sheer joy of living, their ease of life; companions in our world, benefiting from my husband’s income and the TLC the family bestows on them.

So this morning when my daughter came in from egg-gathering and reported that our laying hen had a “block of wood” in her eye my heart sank. I thought, These are Ralph’s chickens! Why am I going to have to deal with this? It was a grievous injury indeed – closer to a “block” then a splinter, the piece of wood had pierced the fowl’s lower eyelid and was barbed like a fish hook, set deep in the flesh (I know – ew!). My daughter and I attempted to remove the item but it was impossible.

An “emergency” call-in and afternoon trip out to the doctor (I hope the chicken likes listening to Abba as much as my kids do) and a half hour later the heroic vet had removed the wood and told us by a small miracle the eye itself had not been damaged. So – that’s great news.

The real amazing part of the story was my daughter, who not only daily takes it upon herself to check on the fowl and bring in eggs, but who this morning discovered the injury and assisted me in our attempts to remedy the situation. She was calm and assertive with the distressed bird; I told her later this is a most important quality for caring for pets. “It’s okay, girl…” she said softly as she carefully but firmly tugged on the wood splinter (a job I did not envy; I was the chickn-holder for this venture). At one point I urged her in a particular operation and she said in a perfectly adult tone, “Mom, I’m not a chicken expert.” (It turned out the “experts” needed two people, ten minutes, and doctors’ tools to complete the job.)

I am just so immensely proud of her. She takes after her dad in the Chickn Care department.