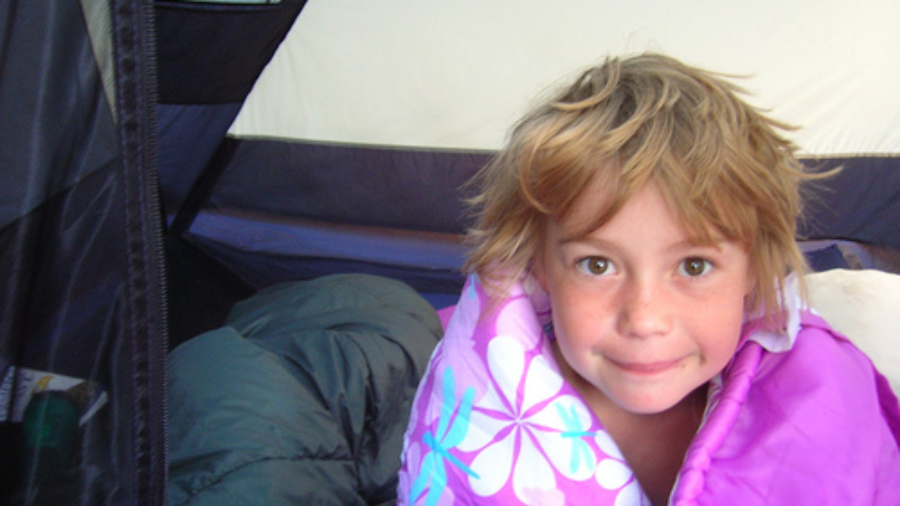 You are reading part two of two of the S24O camping trip my seven year old daughter and I took from Hoquiam, WA to Westport, WA.  I’d attempted to tweet along the ride with pics, but out on the coast this ended up not being possible. Part one is located here.

It was a terrifically uncomfortable overnight on the Thermarest – but I must have slept soundly enough because when I woke my daughter had switched pillows on us, leaving me with the smallest while she bogarted the two larger ones.  Here she is naked, her face all chocolatey, making a joke about how she took my pillow: Like a champ, Sophie elected to stay in the tent while I took a shower and foraged for breakfast.

It turns out that even while camping my priorities are the same: shower, then coffee, then, at some point, breakfast.  Not only did I proceed this way but Sophie did as well. She stayed behind while I showered and brought our morning breakfast beverages (coffee for me, chocolate milk for her – carried in her water canteen).  Then I escorted her to the showers and she happily moaned in pleasure at the feel of hot water.  It only took a few minutes back at the site to break camp (although wrestling the Cabela’s tent back into its sleeve was aggravating). How cool is it that ALL our camping gear is packed on our bikes?

Highway trip behind me, I’d found a new trip detail to obsess on: the number of bikes that can fit on a Transit bus.  Both for Sophie’s sake, and a soccer meeting later that day, I’d decided we would bus from Westport into Aberdeen (if not to Hoquiam and a few blocks from home).  The only problem with this was A. the fear some Transit driver will balk at loading my X on the rack (this hasn’t happened so far), and B. the fear that the bus would already have a bike on it -since they can only fit two.  In the case of the former obstacle, I am a pro at getting my X on the bus rack (it involves pulling the front wheel off) and I’ve found my confidence in doing so has helped drivers feel confident as well.  In the case of the latter obstacle, I just obsessively worried.  I knew at very worst we could leave a bike in town and venture out by car later to get it (ugh).

During my morning coffee run, I interviewed a man at the park and ride (another man with prematurely decayed teeth; Westport seemed to have a few of these working class young guys who were very friendly but looked like they’d had a rough go of it) about the bus / bike protocol. Before I rode off he told me if we headed into town, to check out the “boardwalk” that ran a couple miles along the beach and north to the Westport docks.

Which is exactly what we did.  Although the highway and town were sunny, a few blocks away from the beach the cold, clammy mist descended, bringing a cool breeze to counter the humidity.  The boardwalk wasn’t as I pictured, but rather a smooth, gently sloping path through the grassy dunes. I don't mind biking on the highway or in the city streets; but I must admit, these trails were a real treat. If I was smarter I'd have done a pictorial panoramic of the wild, cold seascape here.

Sophie was charmed that the trail ended right at the observational tower at the Westport docks, and she raced right to the top where it was very cold. I was pleasantly surprised that in climbing the tower we had a pelican’s-eye view of, well, pelicans – many groups that flew close enough it seemed we could touch them.

From in town Sophie elected to try the Westport Aquarium over the Maritime Museum (which has the largest American flag flying I have ever seen, but is probably full of stodgy old fart museum stuff).  It turns out the Aquarium has new owners who hope to put more humane exhibits in the 50-year old tank system that has languished over the years. The new owners have put a spark of life in this Aquarium, which you can sense despite a rather shabby feel to the place. A funky little "dry" display in one of the old concrete tanks.

The new owner took me back to where the seals had once been contained; I was shocked to see how small these facilities were, but glad to hear seals will not be featured on the re-opening of the Aquarium.  My daughter purchased a pack of cardboard dinosaur figurine puzzles and yet another shell – a conch – for her brother, who loves to transform shells into building materials for musical instruments.

It was getting cold and clammy in Westport; we stopped for sandwiches at the Mermaid Pub & Grill (there are lots of breast visuals, under the guise of mermaid paintings and sculptures, in Westport).  It was a nice lunch, a delicious cup of coffee, and a good finale for our day in town.  We took our last few minutes looking at the whale skeletons housed in the courtyard of the Museum.  When the bus came we had no problems putting the bikes up on the front of the bus at our Dock St. stop, although I was both asked many questions and actually filmed by some tourist as I did it. Sophie sat in front, and watched Grayland come and go. I messed about with trying to Tweet to no avail.

Grayland was beautiful, and again I wish I’d had a better camera, or could have popped off the bus for a minute.  The bus was populated by all sorts of locals, including a teen mother who formula-fed her screaming baby and a kind older man who was the only person on the bus (myself included) who thought to jump up and assist her with her monstrous stroller and carseat caddy-like carrier.

It took all in all about an hour to get back into Aberdeen, where we exited the bus, rode through downtown Aberdeen’s Crackton, and back home against a rather demoralizing headwind.

At home Ralph was kind enough to bring our gear in; it took only a few minutes to have everything put away.  I was surprised that a more minimalistic camping trip was so much more fun and so much simpler than any camping trip I’d taken so far.  There were no extra comforts so there wasn’t much to do except ride, eat, and meet people and see fun things.

Technically our trip was not an S24O as we were back home at 2:45 PM the day after we left. I felt this was a great dry-run of a camping trip.  I look forward to taking both of my children soon; I need my son Nels to be peddling, as I’ve noticed on long trips he is the only one to complain – out of boredom, I think.