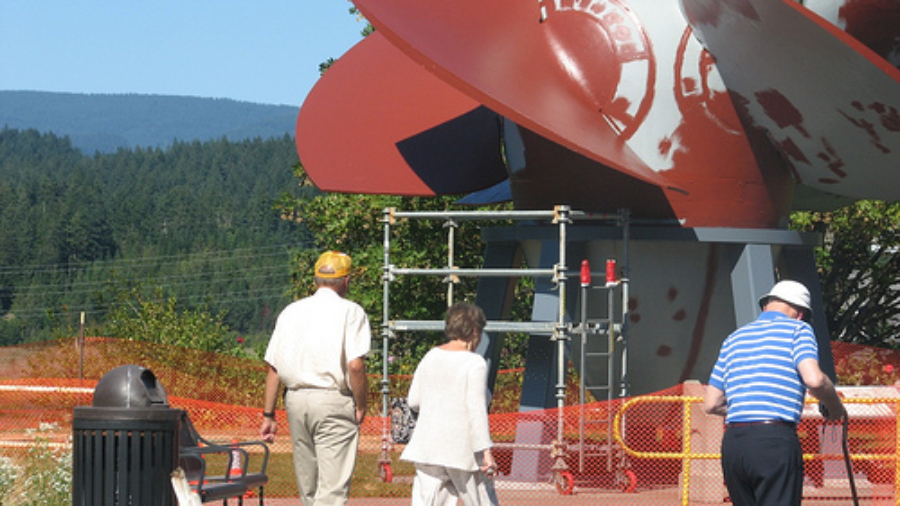 Ah, Oregon.  A land where petrol pumps you.  Leaving Pendleton on West 84 we see the sign: “Warning: Blowing Dust Area, Next 40 Miles”.  What is so unusual about the area that the DOT needs to put up a sign? Because there is nothing else there.  I’m relieved that soon we’ll be along the Columbia.  Water makes me feel better.

The area of Eastern Washington/Oregon we’re now fleeing is so comparably flat and expansive that it seems when I look about to our next destination I am sure we are close – I’m used to hills and treescapes to tell me where I am. This makes the somewhat epic distances we’re (re-)traveling seem all the longer.  But despite the different countryside, the heat, the fripperies of fancy food and lodging, the visits with his grandparents – my son has, by and large, been obsessed on the acquisition of various nuts from trees (as we drive he repeatedly plays with, drops, and cries over his collection of acorns and hulled buckeyes). Therefore on the stretch home we pass the Pendleton wool mill (which, had we not a long sojourn ahead of us, I would have enjoyed visiting) and wineries and a handful of other attractions but Nels is mostly concerned that we stop at Multnomah Falls for an acorn resupply.  The port of Morrow brings us back alongside the Columbia river, and the resultant trains and boats using it for transport.  The terrain starts, by and large, to resemble my home.  Eastern WA/OR leaves the largest impression on me in plant life I’m not used to: the many black walnut trees, buckeyes, and sycamores, the latter with flesh the same pale yellow-green of the massive amount of butterflies crossing the highway just prior to Hermiston.

Instead of an acorn-hunting trip we stop at the Bonneville Dam, which is pretty amazing. If the sun hadn’t been baking our car like an egg I would have liked to stay longer. We weren’t the only ones enjoying it; the locale has a GPF (GrandParent Factor) that is off the charts. Average age of the scores of people there: four hundred and twelve:

The kids at the viewing window on the lowest level:

Sophie took some great pictures of our trip, and my favorite one is this:

I literally never do the “my kid one day will be such-and-such” but you should have seen the look on Sophie’s face while she watched the massive salmon working their way upstream – she was entranced, and smiling as if at a gamboling kitten. I feel so sure in my bones Sophie will end up working with animals when she’s older. She loves them so very much.

We arrived home at about 7:30 PM to find during our absence my mother had inhabited our little space – the space that’s supposed to be only ours – unasked, leaving a few messes and a stripped bed and taking a tiny bit more of my sanity.

But I guess that’s something to sort out another time. Ugh.