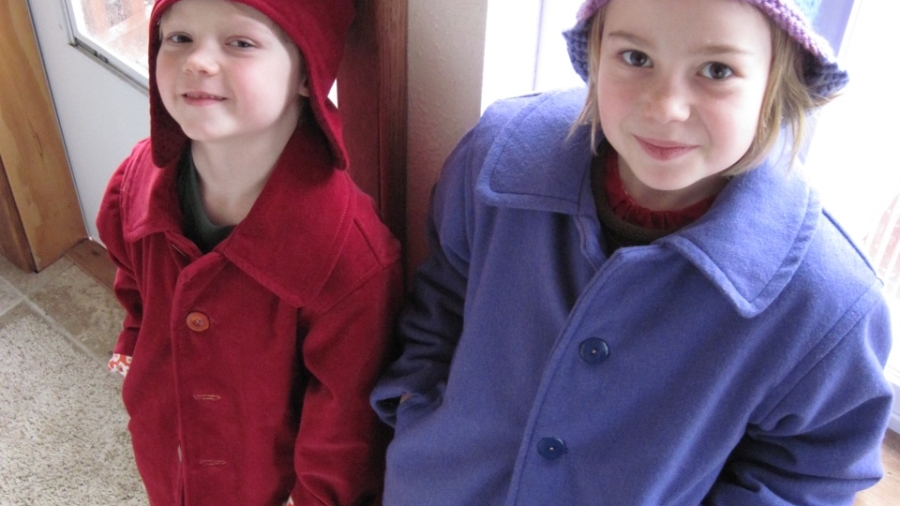 by kellyhogaboom
with 4 comments
sewing journal

This winter has dipped into what feels like record-cold and I wanted to make coats that would work for the kids.  Nels’ is from a no-wale corduroy; Sophie’s, a pre-washed and dried wool flannel.  Both are underlined in a wool blend and lined with a silk twill.

I’ve made many an Ottobre coat (off-hand examples 1, 2, 3, and 4, the latter of which is the same pattern as these two). I think I love making a coat almost as much as a baby bunting. It’s so structured and there’s so much work that goes into it that many people don’t see and can’t fathom. So I guess I’m actually a little sick in the head, when you think about it. I also finished a couple hats to more or less match their outer gear:

I barely get time to take pictures of my creations. In fact, I probably only photograph about half of them. In the time I’ve been sewing the kids have loved the things I’ve made: usually whipping them on then dousing them with mud, peanut butter, and soy sauce. If only I could just sew, sew, sew and have someone else take pictures – because I’d love to keep a record. Oh also? Maybe someone else to raise the little buggers and cook for them and clean up after them every now and then.

You can see the detail shots of these creations at my Flickrstream.