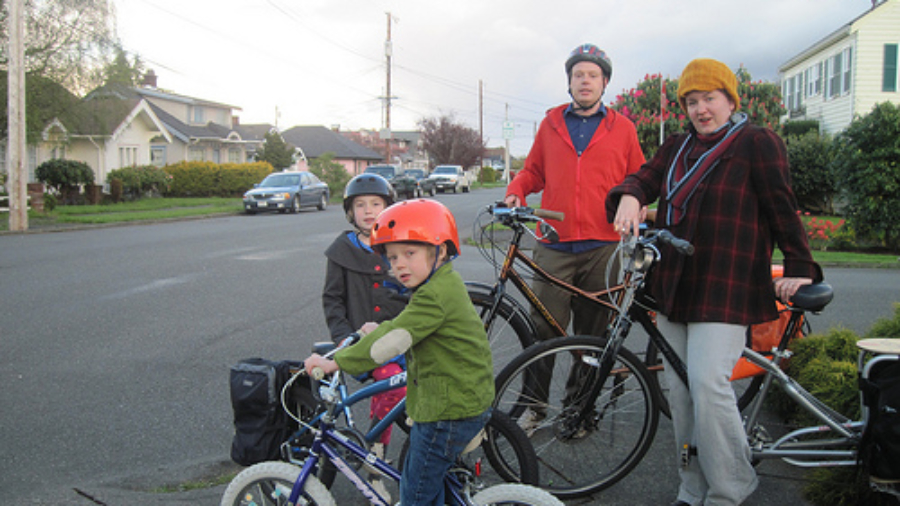 by kellyhogaboom
with 5 comments
Uncategorized

Oh good Lord. If more days were like this they’d make up for a baker’s dozen of bad ones. It wasn’t just that my head cold lifted and the sun came out, and I got to watch the kids swim in really awesome lessons at the Y, or that we spent most of the day outside and ran into all sorts of friends and neighbors, and had a wonderful late lunch at our little Chinese American diner including an illustrative discussion with the proprietess (who loves Nels, and this is reciprocated) and some old-timer schooling me on the “class of people” living in Grays Harbor (ugh!) – all of which were wonderful, wonderful parts of my day.

But no, early in the afternoon kind of as an afterthought I hauled out Nels’ “new” bike ($9 at Thrift City, $5 for tune-up and new seat from our bike shop) and asked him if he wanted to learn to ride. And he said yes. And what the hell happened if he didn’t get on the bike and just start pedaling, steering and balancing, perfectly. Yes, his very first time ever on his own two-wheeled bike. I thought Sophie learned fast but this was amazing. Also: no training wheels BTW, as the bike guy told us years ago to not bother, so we never have. I will point out instead of $10 training wheels they’ve been riding on the back of my longtail bike which had a considerably larger price tag.

Nels rode well and with joy and competence from the get-go. He asked for help at first (barely steadying him as he got started). He crashed several times. But he even crashed awesomely – quickly and efficiently and when necessary, swiftly disentangling himself from the bike so not to go down with it (yes, there was blood and bruise and he got right back to things every time). On Karr Avenue he hit a truck, sort of but not really, because he used his handbrake and feet to avert a bone-rattling crash then sprang off the bike elegantly as it slid under the vehicle while he gently placed his hand on the door as if soothing a riled-up stallion.

And of course I really do mean it about the longtail experience being hugely instrumental to his abilities, because he also displayed an incredible awareness of traffic, space cushions, lane position, and braking distance – besides the balance and steering bit. Trust me, I’ve ridden bikes with many children and a lot of them are never trained properly and it kind of makes my hair stand on end to bike with them as they jet across streets without looking and ride into oncoming traffic and weave back and forth wtihout shoulder-checking and crash into the rest of the bike party. My kids have learned to ride a bike by sitting on the back of mine for a couple years. Kind of an incredible bonus to cargo biking.

But, and I want to be very accurate here: while there was a part of me that was amazed (although I shouldn’t be) at just how effortless, natural, and inspiring my kids’ process of learning is (when it’s not forced, coerced, or prompted), the thing that most stuck with me was the joy inherent in the entire business. Nels radiated concentration, ability, success, and happiness; a vitality thrummed through his veins, not something my camera caught (I did grab a bit of video) or that’s even easy to explain. His eyes flashed at me when he felt he was getting into a tricky bit of terrain. His voice rung out assertive yet gracious enough when he asked me for help. He hurt himself a couple times, enough to bring tears. I held him and pet him and he was back on the bike with no regrets nor fears. I felt so fortunate, just amazingly happy, to be with someone learning something new in such a way, all the joy and ability and in-the-moment presence of this child. It’s not something I often see in adults.

It’s dark by the time we stop at my mother’s; she’s not at home. Sophie wants to stay the night. She suggests she write a note to my mom. A few minutes later she hands it to me: “Hello Gram, My mother drooped [sic] me of [sic] to stay the night. I hope that’s OK, Love Sophie”. I laughed and laughed because I meant a note we left to ask my mother to get back to us, as opposed to a note that we tape on the window after the assumptive act of abandoning the child (which is, in fact, what we did; and yes, my mother upon her return did agree to the scheme). Sophie and her bike stayed at my mom’s and Ralph made reconnaissance with our daughter’s suitcase.

It was a really fucking great day. Photo courtesy of Little P, a neighborhood boy who accompanies us on bike trips when his family lets him.