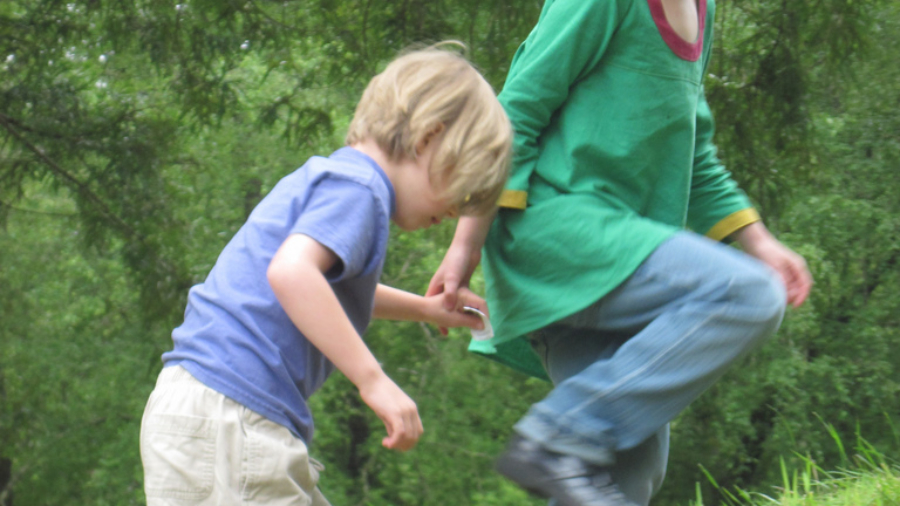 Example is the school of mankind, and they will learn at no other. – Edmund Burke * Apparently at a college function a couple days ago my husband was beset by two coworkers with questions regarding our homeschool life. SOOoooOOOO predictable what people ask or what “advice” they give (unsolicited). I’m sure Ralph fielded the (friendly as far as he could tell) inquiry just fine. He’s pretty awesome at that kind of thing.

Funny because no one plagues me much about (to take the top-ten bingo-winner of all time!) “socialization” concerns because anyone who spends time with me is concomitantly exposed to my children – I’m with them near-constantly. Thus the friends, strangers and acquaintances I run across see first-hand how excellently our kids navigate with just about everyone they encounter, including grownups, teenagers, authorities, people with mental or emotional health issues, rowdy friends ([cough!] Flo, I’m looking at you!), crying babies, clueless or rude relatives, etc. etc.

Tangentially, my children’s “social education” has some notable upsides as these little ones hold their own up against a variety of asshattery flavors that most kids have been trained to either accept or work around through dishonesty and/or avoidance. For instance my mother recently related that last fall when Phoenix spent a couple weeks with my (patriarchal ass of a) grandfather, my daughter was “the only child in Grandpa’s family experience who didn’t fawn over him. And it kind of got his nose out of joint.” Without going into any family history I must say I was floating on air to think of how this played out in two weeks of my absence (in contrast to my daughter, I drank liberally of the “Grandpa is Jesus Christ Himself” kool-aid until my late twenties). Anyone who knows Phoenix knows she is a level, circumspect and polite child.** She’s also a child who has a Center, as we say; someone who can’t be bullied by any whozit who runs across her and thinks that because she is a Small Pretty Girl and has only been on our planet a handful of years she deserves less respect or autonomy.

New lessons: today deep in Sam Benn Park the kids found a large cedar stump that had been hollowed out by a creature or perhaps (less likely, given its remote location) other children. The stump was surprisingly deep, enough that my children could fit inside and their heads not stick out the top. Inside it smelled lovely, cedar and loam. Nels dropped a cheap golden “pearl” necklace (he’d just recovered from the tennis courts) into its depths and Phoenix used a variety of forest tools to attempt to retrieve it. Sadly it was lost; I hope a woodland creature finds it, maybe as a gift for his Lady Squirrel. Minutes after our stump tomfoolery I spied a discarded hypodermic needle, very classily capped off so there was no protruding sharp. I showed it to the children and asked them if they knew what it was; Nels called it a “shot”. I gave them the proper term and told them someone was probably doing drugs in the area and left it. “If you find one, don’t pick it up unless you’re sure you can do so without sticking yourself. If you get stuck you might get very sick and will likely actually need a shot. If you do pick it up you must throw it away. Some bathrooms like the library have a big red ‘biohazard’ container these are meant to go into.” The kids nodded in recognition. Phoenix found another needle a few hundred feet away and this time she knew what to do.

See, you learn something new every day in Aberdeen.

* Thanks to Mamapoekie for the quote today!

** So, um… on the Nels front. He has – of his own volition – stopped using swear words and now subtitutes his own “beep!” sound in their place. & Yes, I am so proud.