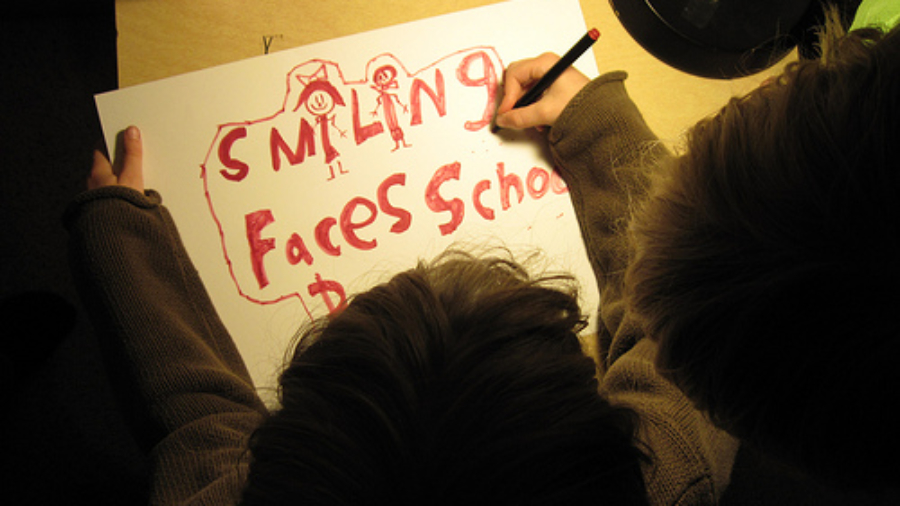 Tonight during dinner (a lovely Vietnamese dish augmented by grilling tri tip steak outdoors) the kids brought up “playing school”, which is, oddly, something we do only a handful of times a year. I don’t know why this is such a rare event exactly as we (the kids and I) are huge nerds who like nothing more than doing “workshops” and workbooks and crafts and dressing in “uniforms” (the kids) and me ordering them to get my coffee then go feed and water the “school cats” and clean the “school bathroom” (in other words, having them do every chore, ever) and they do everything I say and learn things so fast I get a little creeped out.  Maybe we don’t do it that often because I am incredibly lazy in some organizational way; certainly when we do play “school” we always have a great time.

In tonight’s case we got started about 9 PM.  After dinner the kids dove into their room and cleaned up and made a sign for the “school” (naturellement!). People donate schoolbooks and workbooks to me now and then and of course there’s the inter-netz so in no time I’d worked up a few activities on the subjects they’d requested (math, “fireworks”, and art). I arrived at the “school” just as the kids hung their sign for the “Smiling Faces School & Pet Co.” Phoenix and Nels made a little graphic displaying themselves as the two “i” characters in “smiling”. They were one hundred percent serious and intent about this.

First we diagrammed sentences in an oceanography lesson (time it took for my six year old to grasp “noun”, “adjective”, and “verb”: one minute; Phoenix had already educated herself on this through something she’d read at sometime or another). Then we did some math. Both my children enjoy math-on-paper but my son is a bit more adventurous in tackling it; Phoenix is such a perfectionist she is less of a risk-taker and thus slower to adopt strategies. I encourage her to use “baby” methods like finger counting or pictures or whatever she needs; somehow this less pressured approach helps her leap and bound into understanding more complex concepts within minutes. Today she worked on times-tables from downloadable fourth grade worksheets and said, “Oh, I’m totally grasping this concept!”

Nels added and subtracted three digit numbers. What’s amazing too is that he is very good at this but he still now and then flips a “5” or a “6” around completely backwards. I love that were he in school he’d be harped on about this (thus each subject gets to be also Penmanship and Manners and Taking Ones Turn and every other goddamned thing). Nels laughed in delight every time he got a problem right (which was every time) and he smelled so good leaning against me I just about had butterflies in my stomach. For Nels’ “fireworks” unit we did a math worksheet (this one probably a kindergarten or preschool “level” involving sticker activity) and then a silly little oil/water/food coloring activity where non-emulsified color droplets settle in oil to then meet and “burst” in water. Slowly our pitcher began to bleed the green of the “fireworks” and the kids ran out to the garage (where Ralph was recording music) to beg him come and see: We took turns reading excerpts of a world history book.  It was a bit dry but they followed along just as well.  The book had a brief and useful selection dilineating “fact” vs. “opinion”. I went over it with the kids; I’d have one of them make a statement so I could guess “fact” or “opinion” and they’d get to correct me. Nels did confusing little numbers like, “Nels wants a pencil,” with this smart-ass smile when he’d say it (shit! Really! I think that’s a “fact”, right?).

So I asked Phoenix to give us a fact/opinion and she immediately said: “Spitting cobras can aim at enemy targets up to six feet away.” Then, she giggled and amended, “Well, these snakes do not actually spit their venom.” (!!!) She thought for one more minute and then offered, “The Egyptian Cobra can stretch the ribs in its neck to give itself a dark and scary ‘hood’.” She even ducked her head a little and did scare quotes around the word “hood”! I just about died laughing. The laughter was not mockery, or perhaps it is self-mockery that my children are so much more intelligent, exacting, and – this probably is the most important – deeply in the moment than I. My laughter is a pure joy and amazement at them, tandem feelings that fill me up when I slow down enough to spend Actual Time with them.

So I guess I’ll do some more of that tomorrow.