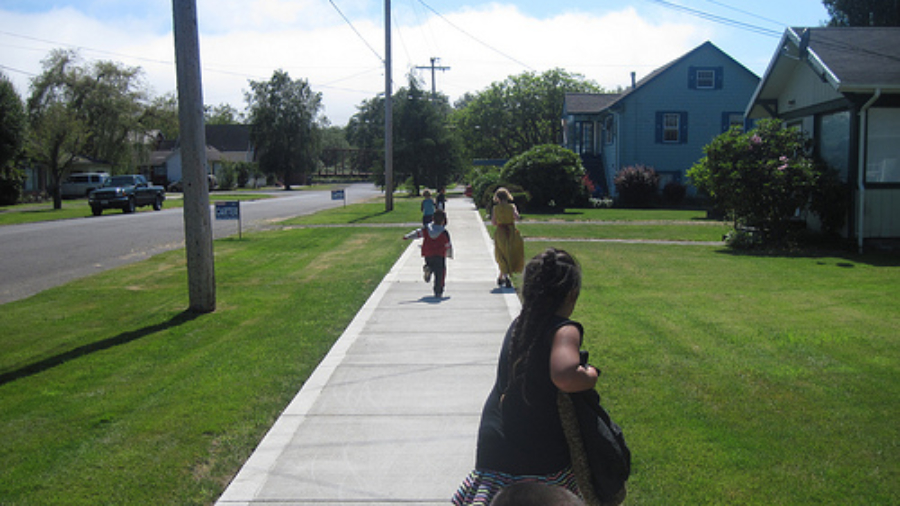 A couple weeks ago my son looked directly at me and said, “I’m going to go over across the street and meet the neighbors.” This didn’t surprise me: other neighbors have been telling me how impressed they were with my children’s friendliness and directness. Our neighborhood has turned out lovely for kid-play because, quite simply, there are a lot of kids running about and our yard abuts several houses of (so far) chicken-friendly and (as far as I can tell) perfectly lovely people happy to have a chat. Many of the neighborhood kids end up at my house, some of them over and over during the day, and I’m not exactly sure why as we lack so many of the things I’ve heard today’s kids can’t do without, like television and Wiis and junk food and whatever. I’m not exactly a doting hostess either as I wander my way through writing and cleaning and cooking and sewing and grabbing a half-clove cigarette on the deck. The kids come and go and I guess I’m just kind of used to having kids around and I seem to suit this life (very funny as I grew into a decidedly anti-kid young adult, before I embarked on the adventure of having my own).

A couple days after Nels’ announcement I was walking through my living room when a small closely-shorn boychild popped out from under the table in the dining nook, grinning at me largely and wordlessly, then climbed on my couch and began to execute mid-air flips. Very nice, I told him. Soon his brothers were in and out of my house and after about an hour their uncle I. came over and asked if they’d been any trouble. Not at all. Today halfway through laundry I found myself amidst all four of these siblings running about and peering through the house. I figured a walk was in order so I asked them if they wanted me to take them out to ice cream. They said Yes but I had to spend a good deal more time rounding up their shoes and my son (who by then had climbed fences and picked apples and gone next door while I did the shoe-thing). I met the children’s parents and, wonder of wonders, retained all six new names – I am terrible with names (this family of six lives in Tacoma but visits often, as the grandmother, uncle, and a few others live here on first street). “Can you handle them?” their mother asked smiling; I noticed her hair was pulled into an elaborate coiffure with purple glitter strewn through it. I wasn’t sure if I could handle four kids I didn’t know well on a walk along a highway but I said Yes and it turns out I could. We ended up taking quite the circuitous route through train tracks and back paths even I had never crawled over as a child. Kids loving climbing on abandoned trains and I figure it’s a birthright. The elder kids helped the littler ones (the age range was three to eight) and it was an amiable and energetic journey. As we left Adams street for the houses and trailers tucked in back lots I heard suddenly bright and vibrant yelling; a woman thirty feet away was calling to the children and so was her brilliant, preternaturally blue macaw – the animal’s voice very, very eerily like a human being’s. As one pack the children streamed over the tracks to sway, entranced, and observe the birds. I introduced myself and she told me her name was M. I don’t know if she lived in the trailer (I think it was for the birds) but as we talked her elderly mother drove up and parked and smiled and went inside the house. I asked M. if I could take a picture of her and the birds. I could barely get a word in edgewise and you know I’m a pretty talkative person. The birds were rescue animals and she told me a bit about how to know if a bird had been captured in the wild or bred in captivity. She was pleased when I recited I’d read 75% of wild birds caught died; she was clearly passionate about these animals.  I wished I’d been less occupied with the children and I was less photo-shy because I would have loved to focus on a better portrait of she and her birds to print out and bring back to her. Maybe I’ll do it all the same.

We thanked her and went on our way; a half a field later we came across a friend’s mother L. with her dogs and I caught up with her, sliding right into conversation as I helped children up and then off the railcars as they requested it. By the time I said goodbye to L. the children were clustered near one of the old Lamb’s buildings and expertly knocking out windows with satisfying splashes. I made them stop although it must be confessed I would have liked to do one in myself. Little by little and through a bramble patch we made it to the hamburger stand for hard ice cream. Three bubble gum, two rainbow sherbert, and chocolate brownie. The children didn’t mind at all sitting next to the dusty highway to eat. The four neighbor children flagged a little on the walk back but we made it home okay.

I’d be lying if I didn’t admit I feel a little tired here in the summer with the extra responsibility of other people’s kids, a responsibility I take on willingly enough but is a different pace from even a month ago before the weather turned. In addition Ralph’s schedule is such he works longer days (ameliorated by a short Friday) and with only one car between us he’s either kept away from home for a period extended by bus schedules, or I’m at home on foot or bike with the kids.  Breaks for me feel few and far between. I’ve learned to be patient and wait; soon the perfect moment will come of calm and peace and only a few dishes before I can sew for even a few moments in the quiet.  Maybe one day we’ll even have both cars running or some extra cash. I’d love to buy the kids some more books and a couple of small desks or maybe curtain rods for our austere little Hotel de Hogaboom staying cool from the sun.