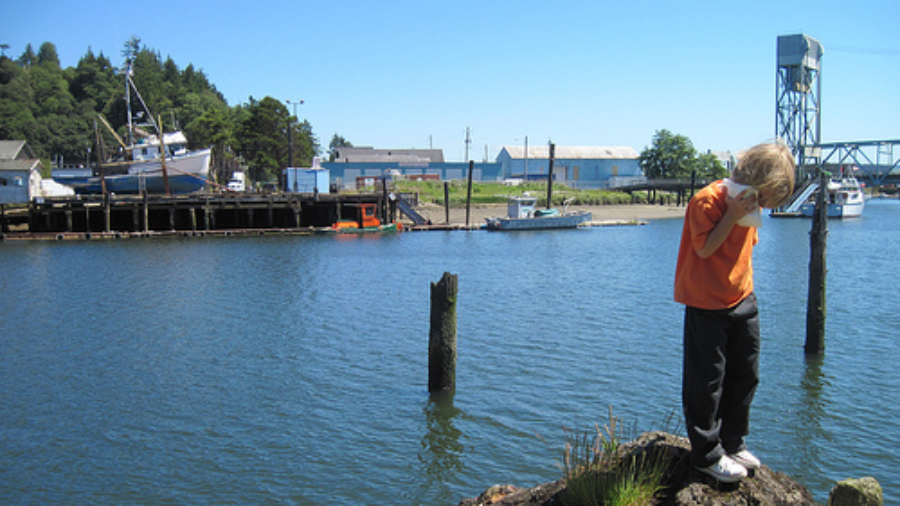 Nels is looking different today from yesterday as about thirty minutes into our biking adventures he biked right into a car (while vying for the attention of children outside in a daycare yard). The daycare employee who witnessed this (I only heard the thunk! behind me) ran inside to get Nels first an icepack then an Otter Pop for good measure. She was a beautiful, beautiful girl with deep tanned cleavage and long shiny black-brown hair and I’ll bet she even smelled nice (I didn’t lean in to check) and with her sympathy and the ice pack and the ice cream, well, Nels didn’t seem to mind being hurt so much. My son spent the next half hour wearing the pack, and as a result his black eye is slightly less gruesome than it otherwise might have been. Today started out with our typical feral rituals: the kids went outside and ate (for breakfast) marshmallows, bananas, and special dark chocolate. In the yard, half clothed. By then I’d finished my morning writings (here’s some of that) and housework so I asked them inside where they each took a big drink of milk before we biked our errands, ending up at the Central Playfield park where now no longer do we have shade-trees (cut down by the City) so the sun bakes us all and the adults who wish to talk have to shout over the sound of two highways (the trees helped absorb that too). The bathrooms are also closed down as well (Honey Buckets in the summer sun, kids – and grownups – love that sort of thing) but the pool is open from noon for a few hours and the kids? They love it. My kids were in their underwear as I hadn’t brought the suits. You know, I don’t often use the term “ghetto” but, well. I ended up scrunching under a pitiful amount of briefly-supplied tent shade and talked to a father there with four of his seven kids, a handsome, deep brownish/red-skinned man who could balance with me on the proverbial non-native language teeter totter, meaning he had about as much inglÃ©s as I have espaÃ±ol (the vast majority of native-Spanish-speakers here usually have very good English although I do meet those que no entienden). One example: he told me he and his wife were “broke” so I asked ¿Tienes el trabajo? then he managed to convey he meant, he and his wife were broke from relationship with one another and I said “Oh! Divorced. Separated. I thought you meant no tienes dinero.” Then after we’d shared where we lived and how long we’d lived there I told him, “Mi esposo trabaja en el colegio” in case he got some ideas I was a scheming single mama looking to juggle a family of nine kiddos (instead I’m rather a scheming conversationalist who loves talking to strangers like a Huge Nerd) or in case he had similar ideas (seriously? A mama out with kids in Grays Harbor is not immune from flirtations from random strangers). He had the most beautiful one year old clambering around on him, a boy with shoulder-length locks and deliciously plump limbs who took interest in my bike wheels. “Fue agradable hablar con usted,” I said to this father as we biked out, my kids soaked and newly cooled down and me as hot as ever as we headed to our little grocery store for dinner provisions.

It’s no wonder to me my kids are getting a great education as letting them out and running and biking and playing and eating and drinking means when we get home they absolutely want to read an encyclopedia or give themselves spelling/English work or learn times tables or teach themselves history (or even clean their room, as my daughter is doing at this moment). And another thing, I never hear my kids say they are “bored” – ever, which is something to ponder given we have no television or video game system! (In full disclosure, we do have a computer which they are allowed to use if I am not using it). (Also, now that I have had the hubris to even slightly brag or more accurately, take joy in a facet of our little fringe lifestyle, the children are going to immediately come inside and chant in demon-voice how bored they are).

Tomorrow our day will consist of 100% beach time out in Ocean Shores with my mother and a picnic basket and sunscreen. And that’s going to be pretty goddamned awesome.

As I type the kids run off with the various and sundry neighbors catching the ice cream truck (the frosty treat-bait has caught some full-grown, some still children); my husband on his way home is picking up fresh mozzarella for insalata caprese and tahini for tomorrow’s hummus and also – very important – a pool for our front yard. Because like many PNw’ers we don’t have air conditioning and employ the strategies of lowered blinds and open windows or fresh cooling water.