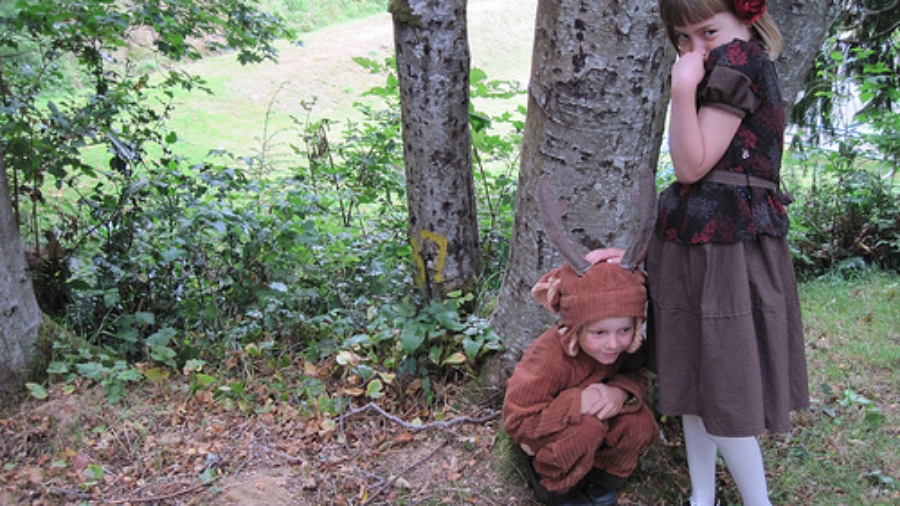 by kellyhogaboom
with 19 comments
dailiessewing journal

A while back I got this goofy idea to take “back to school” photos for my kids.* I am now fully aware this is a bit silly of me, but school pictures were a ritual I enjoyed as a child. I asked Phoenix what she’d like me to sew up for a school picture dress and she voted for something vintage and sedate and suggested the photo be taken in a historical setting like the Aberdeen Museum of History (which she’s been asking to visit for some time).

I asked Nels and he said he wanted, well… Phoenix’s dress is from Vogue 2448, a pattern about 60 years old. It was so fun to sew up and has many lovely details! I only regret I had to produce such a work of art in such inexpensive, Joanns-sale fabric. I am starting to realize my sewing skills would best be served by higher-end fabrics. That does not make me MORE able to afford them.

Nels’ deer suit was a self-drafted pattern and is complete (incongruously) chenille fawn-spots and bound-buttonhole -removable antlers. I hand-dyed the corduroy to get it a darker color than the camel I purchased (again, a not-so-hot Joann’s buy). I also dyed the chenille to change its brilliant-white to an ivory. Then I washed the whole business in warm on accident and the brown bled into the chenille. This will likely come out. Or it won’t. Nels doesn’t mind at all.  You can see some details of the little corduroy deer in the Flickr tagset.

I had this idea to take sedate and unsmiling photographs of the children, seated at a desk or somewhere stodgy. There were certainly great sitting opportunities at the Museum but it turned out my kids aren’t so into sitting. I have a bunch of very blurry pictures of them smiling really big as they run to a different exhibit. They really enjoyed the Museum (which is as you might expect rather prosaically grownup); I hadn’t been there since I was my daughter’s age and I was pleased to see it is still very much alive with volunteer efforts and grant-writing and such. They’d even edged some Kurt Cobain around the more typical logging fare you see around here; now that can’t have been a decision without controversy (you might be surprised how vitriolic some local residents, especially those older than forty, feel about the man and his music).

Ralph and the kids liked the little theater best (it seats only 21): We hit  the park afterward. Then we got home and I made some tasty Vietnamese cuisine and we had friends over and washed the dishes and – now? It’s suddenly beer-thirty! (Because seriously, my friend J. just told me the health benefits of dark beers like Guinness are “well-documented”. Sounds good to me!)

* When I thought it over I became far less interested in this idea but still quite invested in sewing what my children and I had planned. OK well, they gave me their ideas and then I obsessively planned the sewinz. Because I am a Try-Hard.