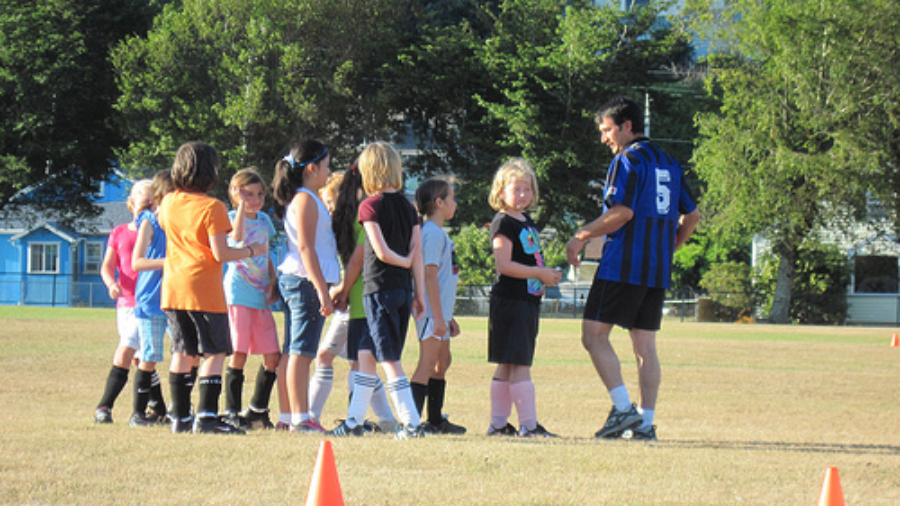 (Here’s our daughter her first year (2008) and then last year. She is looking more like a young lady every day.)

While watching I leaned on my bike and talked to J., a winsome and buxom freckled mother I knew from homeschool circles (our daughters were also in the same public kindergarten class two years ago). I spent even more conversation with new acquaintance N., a small woman with beautiful skin and a soft girlish voice who had much poorer English than my Spanish (a rare event as most native Spanish speakers I meet have better English than I have of their language), and I was pleased to have got along fine with her in conversation although I kicked myself for not knowing some of the verbs crucial to our conversation (juegan, which rang a bell but I couldn’t place it and she couldn’t elaborate; I looked up when I got home). I self-identified as having meager Spanish but she told me she could understand me: “Entiendo tu espaÃ±ol”, actually I think she said “se entiende” which was a bit more encouraging even, and I am pleased enough with all this. She asks about uniforms and I tell her I don’t know what’s in store – la aÃ±o pasado no numeros, pero todos son del mismo color; I introduce her and her daughter to another mother. I’m pleased with myself for (possibly) socially lubricating things to positive effect and not screwing anything up.  I am talkative and social anyway, and I work hard with my little brain to intuit whether someone wants to speak with me or not, which is not something I can always say with confidence I get right.

Nels and I biked back home and left our girl to come home when she was done playing afterward. It wasn’t that much longer I heard the door close and her satisfied voice saying, “I’m home!” tromp tromp tromp, shedding soccer accoutrement on the kitchen floor. “Phoenix, will you please put your soccer stuff away?” “Yes Mama.” Ha!

Tonight Ralph is in Portland at a Neutral Uke Hotel concert with friends and I’m making headway on a wonderful little sewn item, yet another surprise I cannot yet share, and I’m cutting many pieces and measuring carefully with only the smallest bits of yardage that go in the bin, the remainder of the fabric either folded (if large enough) or wrapped for donation to the local senior center which seems to love my donations and indeed I observe they sell. Sewing often means I am so incredibly not-wasteful in my remainder supplies, that I can move through yardage and thread carefully, putting up needles with remaining thread on a strip of cloth tacked to my wall, taking an inventory of fusible interfacing or half-inch elastic or needles (I wish I could buy sewing needles in bulk as I change them so often), leaving the project ready for the next day’s work, very satisfying until I see the kitten Hammy clusterfucking my serger threading which as you know, is such a joy to re-do.

While I am thus employed my son comes in the back room and tells me he’s hungry. I move about the sewing room and suggest dishes I could make for him (since Ralph isn’t here and I wanted to sew sew sew I didn’t prepare a sit-down meal). Nels asks me in the kitchen and I step in our little pantry and say, “How about a sandwich and some peaches?” selecting a can of my mother’s home-canned stuff, delicious they are, but the old lady did not clean the jars and the sugary goodness makes it stick to the shelf, and in freeing it my hand fumbles –

and in the split second before the crash registers my son says, “No peaches,” cheerfully. Then we stand there in ruin and I realize I’ve wasted the food and made a mess besides and of course miscalculated what The Boy wanted anyway! I’m completely pissed (not at anyone, just the Universe) and Nels looks at me with widened eyes and then without removing his gaze slowly reaches to his immediate right and selects the broom off the wall. “No baby, that won’t work, there’s syrup on the floor and we’d gum the broom up.”

The thing is, I could have closed the door to the pantry and left the whole mess for Ralph, and he wouldn’t have begrudged me one bit, because if there’s one person who understands how much work housework really is, it’s that man, and he would have been happy to clean it for me, to do his part. But I’m thinking of him and how hard he’s working and I clean it myself, a total mess best done carefully with wet rags, the hefty weight of syrup and laden beaches having caused the jar to break into many rough pea-sized components, many I’m leaning on with my bare palm as I assiduously wipe the mess (later as a total coincidence my Maytag washer will choke, smoke, and die while rinsing out the mircoscopic glass shards from these very rags), and eventually the job is done.

There were a half-dozen other little things, and doing the dishes and getting the new batch of pickling business ready and sewing a button on Ralph’s shirt and washing the kids’ hair and my son cleaned up the bath toys and said with a sweep of his hand and his little gap-toothed smile, “Voila!”

Oh yeah because Nels lost his first tooth last night, I forgot to mention, while entertaining a group of kids and while houseguests and my mom were over, and he was a little celebrity for a minute (today he told me while eating the cookie last night at first he thought, “There’s an almond in here!” yet it was his tooth) and there was enough chaos I could put my head against his chest and shed quick tears. First haircut, first tooth loss: these milestones change the look of a child, makes you realize how fast it all goes, makes you realize how little you really are needed for things to progress as they do. Perfect at most social gatherings of no more than ten
Perfectly groomed people keeping tabs on what they spend
Dear, I looked and looked for days
Only arrows pointing straight between my ears
And I could almost say a sound
But I’d rather sit and stare with you my dear