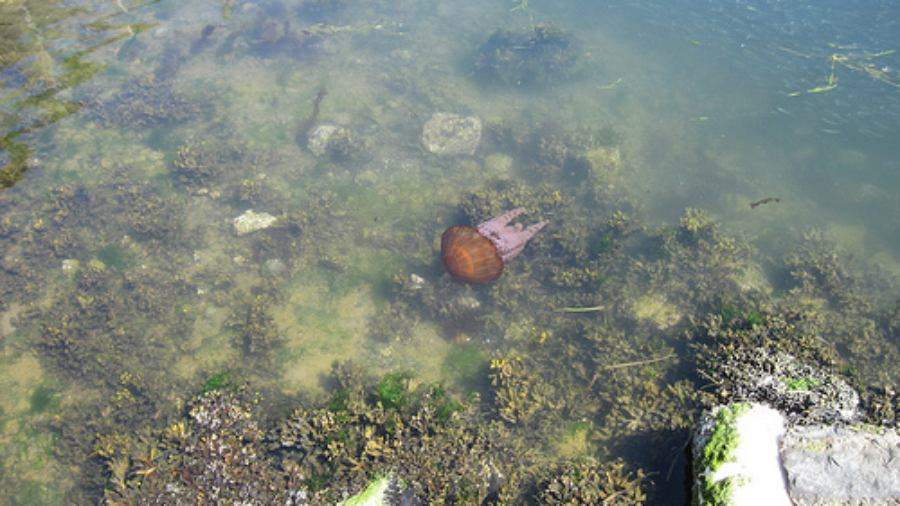 Today went from pleasant, and nice out, and calm, to kind of ONE HUNDRED MILES AN HOUR AWESOME – and at times, overwhelming.

I’m speaking specifically of my friend J. and her daughter E. calling us up to re-invite us to Westport. Realizing we had not missed our meetup window, the kids and I threw together snacks and water and a lunch and made our way to the fishing township as fast as we could given we were slowed down by the neighbor inviting himself along, a bridge closure, and hot hot blacktop roadwork.

The beach town was lovely – the heat ameliorated by a rich breeze – and the walk, and grownup conversation, and child conversation, and taffy at the candy shop, and verdant water and working class environs and massive, massive schools of anchovies (you can see some in above picture but a close-up would have been brilliant) and sea breeze and sunshine and happy, happy, happy kiddos were great. The children spent most of their time running along the rocks and shoals and on floats and watching the working fisherman. They needed no diversion or touristy purchases.

After our plunking around town we decided to go looking for the swimmable old rock quarry I used to frequent as a young woman. I hadn’t been there in years. We drove through the sunshine and I used my phone to call Ralph and accessed my brain to try to remember where the road to the quarry was, driving along and remembering a girlhood friend who’d lived out here and the lovely times we had, green grass halfway up to our chests and running about in the gloaming…

We found the quarry (after some travail). That is, we found the road. Then there was the parking and the hike –  not a long one, but a steep one. The four small children navigated this well and cheerfully, with littlest ones Nels and E. bringing up the rear and playing so sweetly together.

The swimming hole itself… the quarry had not only changed vegetation-wise (there were large trees and a fair amount of algae carpet over the once-clean rock bed; salamanders and crawdads still reigned as in days of yore) – but –

the real change was the stunning amount of human refuse. I have literally never seen so many spent shotgun shells. And there were mattresses and auto parts. And food wrappers and beer bottles and kiddie pools crumpled up and discarded. And spent condoms. And broken glass. And coolers and torn-apart teddy bears. It might be easier for me to list what wasn’t there.

Two things occurred to me. One was how upsetting these changes were. They weren’t just dismal but they also hit me in the chest regarding the passage of time and the occasional ravages committed. In my mind and heart I’d been diving off these shores with my young boyfriend (that would be Ralph) only months before. But it had been some years and the place was utterly changed. After some time I realized I was making too many hard-humored jokes about the nastiness of the garbage, and I made myself stop. It was an effort. I made myself stop because:

That leads me to the second thing that occurred to me: the children were merely curious and cautious about the garbage but accepted it as a reality. They delighted in the trees and the water and wading and salamander-watching and did not complain we required them to keep their shoes on, because even the water, yes, was littered with dangers. They did not pull back or complain about the venue. It was humbling to see children, once again: how quick they are to see the Beauty in our world, mixed-bag as it often can be. They shared snacks and splashed and swam and waded and quarreled and explored. They were, really, the picture of enjoyment and agency.

After parting with our friends, I had lead-foot to make the RSVPd social engagement back in HQX. Which had some awkwardness including my accompanying extra kiddo who’d not been invited (I didn’t have time to return him home first, but I also think when there’s tons of extra food no one should begrudge an extra guest) then an old beau there walking about while I looked like Hammered Ass and felt pounded flat. Look, in the best of circumstances I am no beauty but after our “Shotgun Shell Swim” as J. called it I was particularly bedraggled (my clothes I put on after the swim were still damp with sweat and my swimsuit bunched unbecomingly under my dusty tank top) and so were the kids and I had mild heatstroke and was horsefly-bit and I didn’t want to press the flesh and talk to everyone.

Probably the worst thing was I was Unable. To. Deal. with any of this and I spent some time wandering the cool, silent, and totally secluded rooms of the local museum adjacent to the festivities, pretending to look for a sink for Nels to watch his snake-musk hands in (he and his sister caught a reptilian beauty) but mostly just being Silent with my son at my side like my most precious personal haunt. I realize this was rather ungracious and assy of me. But I am a Human Being and not always the picture of etiquette. I did my best, hanging on with my fingernails, and when Ralph arrived (he, frustrated, retained at work late today by his boss) he took over our kids and I escorted the neighbor boy home.

And now I give thee “Tetanus Meadow”: Yeah. And you know me. I’m pretty confident in my kids’ abilities to navigate without injury. But I was a bit concerned, given we were much distance from the car and my First Aid kit, and who knows what may have lurked on sharp edges ready to poison his bloodstream.

Of course Nels didn’t hurt himself one whit.

And seriously? Today was the most fun I’ve had in some time.