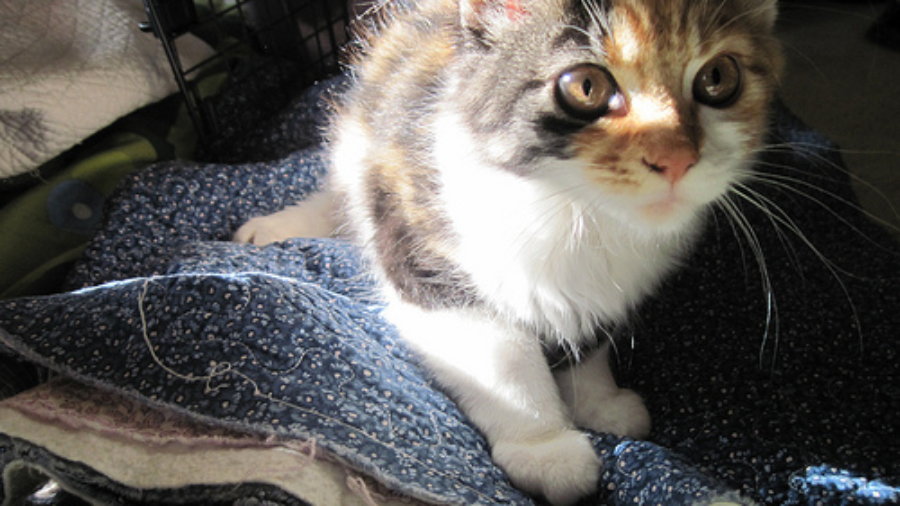 First of all, I want to thank everyone for their support, well-wishes, advice, and hugs regarding our kitty Laurence. It’s been a month exactly since he went missing. I tell myself it is possible we will see him again (which now means our kitty-count would go up to five, which is something I try not to think about) which would be wonderful… but my hopes are dwindling. Ralph and I have been wondering if he was adopted illicitly by someone else around the way. He disappeared so quickly, without a trace, and the flyers we put up around the neighborhood were immediately and categorically torn down. It really hurts my heart that I don’t know what happened to him.

Since little Hamilton was robbed of her brother and playmate, Ralph and I have been entertaining the idea of adopting a companion kitty for her. Today I received notice of kitties about Hamilton’s age and therefore a potential perfect match.

Josie was a free kitten, as it turns out residing at the fellow’s home we sold our van to over a year ago (a carpet cleaner; he’d tenderheartedly brought a litter and mama home from a woman who was moving and planning to dump them at our in-town [kill] shelter). She came already named*, as it happens a name I completely love (in fact it was on my very short list for my firstborn’s name). She’s been pretty mellow since she got here. Mostly just sniffing and stropping herself against my legs for comfort. As I type she has one pristine paw resting on my shoe while she looks at me quizzically. Today was sunny; lovely. Early in my day I went for a run, a bit longer than usual. It put me in a great mood as did the hot shower and hot coffee afterward. I delivered the limÃ³n bunting to the intended recipient (who wasn’t at her workplace to receive it, so no feedback yet), which made me feel good. Oh and by the way, guess how easy it was to motivate kids to get dressed & teeth brushed to head out the door for kittenz-adoptin? Yeah. As I type this two of Phoenix’s fan club have arrived. The children immediately squeal upon seeing the new kitty. One of them, J., misapprehends when he hears squeals of kitty-delight. “You found him?” he asks, delightedly (meaning Laurence). What joy, what care these neighborhood children evidence. Now that I’ve learned how to be around children I wouldn’t trade their company for just about anything else.

* One of her littermates was originally called “Patches” but since the little girl living in the house couldn’t say it, the name became “Blatches”, which makes me laugh until doubled over.