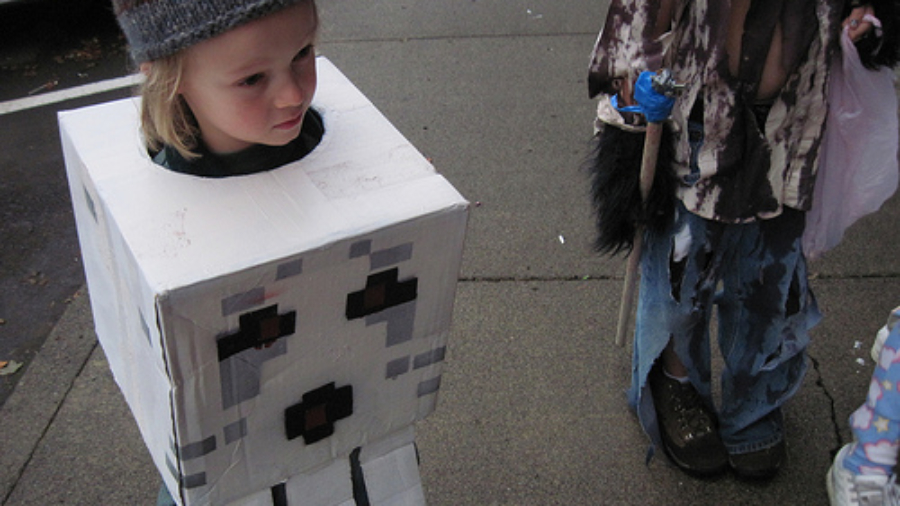 This year Ralph and I surpassed all previous records in ingenuity, speed, and thrift where the kids’ costumes were concerned (a major departure from my more ambitious efforts in previous years). Pheonix wanted to be Death – she made this selection a while ago. I made her hooded robe and applied her makeup; Ralph made Nels’ ghast costume and Phoenix’s scythe – and we did all this after Phoenix’s soccer game this AM so we could be ready for the Haunted Halloween downtown Trick or Treat. We spent about $30 all in all, had a wonderful time, and, most importantly, our kids were thrilled. (better pictures of Phoenix tomorrow, promise) What’s a “ghast”? Nels is glad you asked. A “ghast” is a new MOB or “bad guy” or whatever you want to call it in his (current) favorite game Minecraft. Not only is his costume that of a character in a video game, it’s actually a character in a Halloween update, which was then released today (instead of tomorrow) – we discovered this upon coming home from the downtown Trick or Treat. Nels has been more pleased than anything how all of this has gone down.  The best part is trick or treating downtown today when grownups say, “OOOoooh we have a skeleton, a ninja, a princess, and a…” and then they stare, smiling with vacant wide-eyes, at my son. Who beams back and says, “A ghast!” and then explains it all. Every time.

Here he is, using the costume as a windbreak on the last leg of our tour (& no, he can’t lift his arms in the costume, but he is fine with that): So yeah, today was just the Halloween downtown trick or treating business (full Flickr tagset here). Two friends asked themselves along and we all braved the rain. Tomorrow’s the real event! Nels came home and had one piece of candy then asked me to make broccoli for dinner. Phoenix ate about a bucket’s-worth of confectionery.

It was wonderful to see so many grownups and children mingling so happily. But some grownups seem to enjoy themselves a little too much, if you ask me.