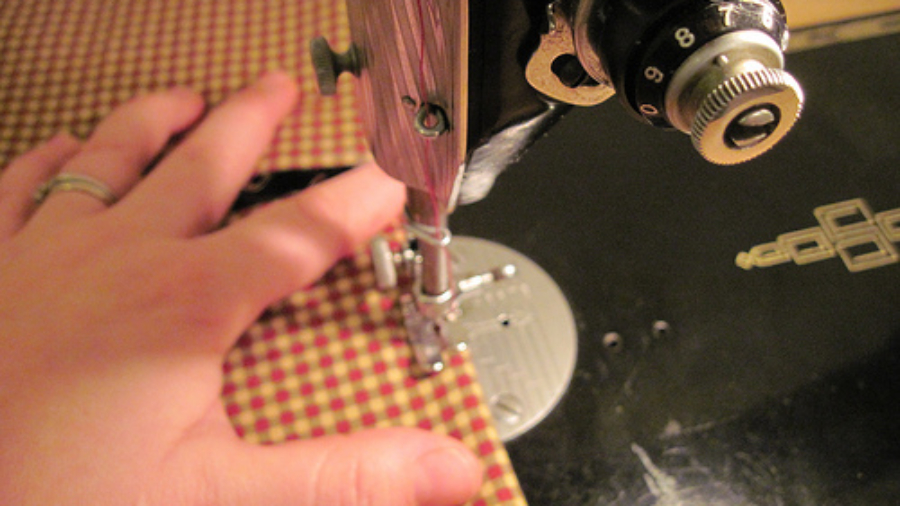 by kellyhogaboom
with 7 comments
dailiessewing journal

I get asked often how long I’ve been sewing. The truth is I can’t remember a time I didn’t know how to sew. I think I’m only a modestly-skilled stitcher, really, considering I’ve been exposed my whole life. Some of my earliest memories of focussed work are of pinning cloth and sitting on the floor cutting with a pair of orange-handled Fiskers; of crinkled tissue cut down to size and marking notches by painfully cutting small triangles. In fact in learning something as a young child the methods my mother used were the ones I thought were The Only Way To Do It. As a grownup I’ve learned my own methods and taught my mother not a few. For instance in contrast I iron all my patterns (shout-out Amore!) and never ¡EVAR! cut them; I dispatch yardage from a table and with rapier-like acuity using a rotary wheel and mat, and I mark notches by a chalk line or tailor’s tacks. My mom sewed a bit more as a young woman, before she had a family and career. She didn’t sew all that much while I was growing up but what is most important is – I remember she loved it. She seemed to enjoy the feeling of competence in her craft and she definitely enjoyed the design process (such as it is when you’re sewing out-of-envelope). I often think the familial example of someone who does Work and loves it is the most likely avenue for subsequent generations to take it up. This is why I’ve never much bothered to try to get my kids to sew. My guess is they will end up doing it because it’s in their blood. They know so much about it already, without even knowing they know! (They also think everyone knows how to make clothes… they don’t realize how rare this is.)

Three years ago my mother brought me my grandmother’s sewing machine – a Singer Centennial 15-91 made in 1950, both popular and utilitarian. The very machine was manufactured and shipped from the same location, only days apart, from the one a friend gave me about eight years ago when she moved from PT (mine is a Centennial 201-2, another great machine). As a Mother’s Day gift in 2009 I got grandma’s machine tuned up and re-gifted it to my mother – who hasn’t yet used it.

If I had the room I’d have kept it myself. I currently own two working sewing machines. I’d love more and to have them set up – it really is helpful, especially given how quickly I construct things – but I lack the space. I sometimes fervently wish for a room to spread out and outfit myself further with a set up serger and a cutting table and, jeebus, SHELVES would be nice! Realistically this won’t happen for some time; we aren’t likely to have a larger house anytime soon. My husband has offered to rent me a studio space in downtown Hoquiam because he is a Really Fucking Awesome Guy. But even the incredibly-cheap prices of downtown HQX aren’t in our spending plan; neither much are shelves or more accoutrement to fill such a space.

But if I could, I would snap up that opportunity toot sweet.

My clothes generally last so much longer than what people buy. My kids’ closet is bursting with garments I’ve sewn. When they grow out of the pieces (which is relatively quickly!) the clothes go off donated or gifted… I am rather shy about giving off my sewn clothes because I’m unsure of what people like and want (and I hate to mail stuff. A lot. So locals are easiest for me to gift to). A surprising number of garments end up going to the Salvation Army. Whatever their future destinations, I hope they are as well-worn and well-loved as they are when in my home.

Currently I’m only a few minutes away from finishing a couple wool coats, which I’ll post soon. Tonight I’m on another pair of Monster Booties, much requested by readers here and there. I have to put a pause on Yes to favors and outside-of-the-family work; Christmas approaches and one of my chief pleasures is sewing for those I love. French seams on the inside of a coat – underlining exposed.

In other news, we have my mom’s (incredibly submissive, aged) terrier Tuck here for a few days while she cat- and house-sits in Portland. My mom brought this huge dog bed as well. Last night, his first night, Tuck curled up on the bed and a second later alpha-kitten Hamilton walked over and put her paw on his face. He immediately self-telescoped using his own butthole and slunk off; three of the cats took the bed in a neat feline coup. Ralph and I trained the cats off the bed (this was very easy and involved putting them outside in the snow every single time they so much as stuck a claw towards it) but I had to snap a picture for my mom. While I did this the fourth kitty Mable watched and decided if she wanted in on the Hot! Sleeping! Action!: She voted “No”, on the account of she would have had to move her body, which resembles the form and function of a Guild Navigator, about eighteen inches. Much easier to stay on the goddamned chair.