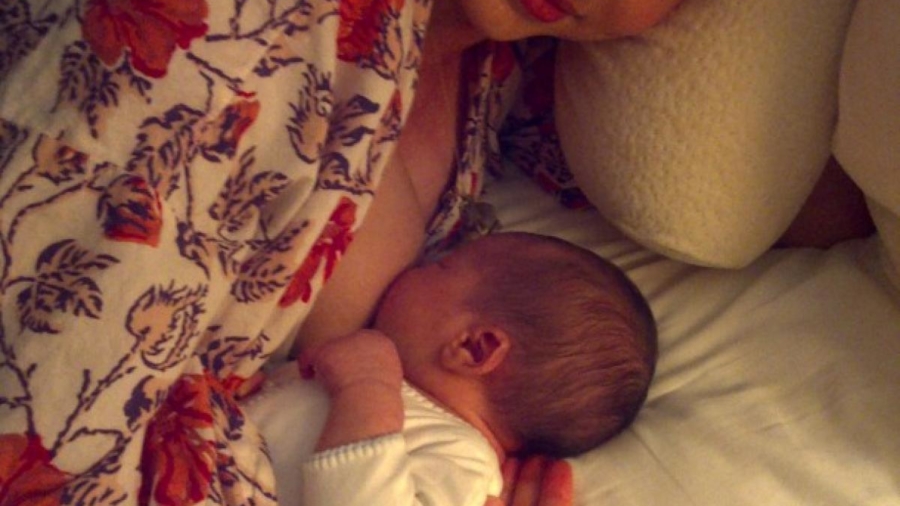 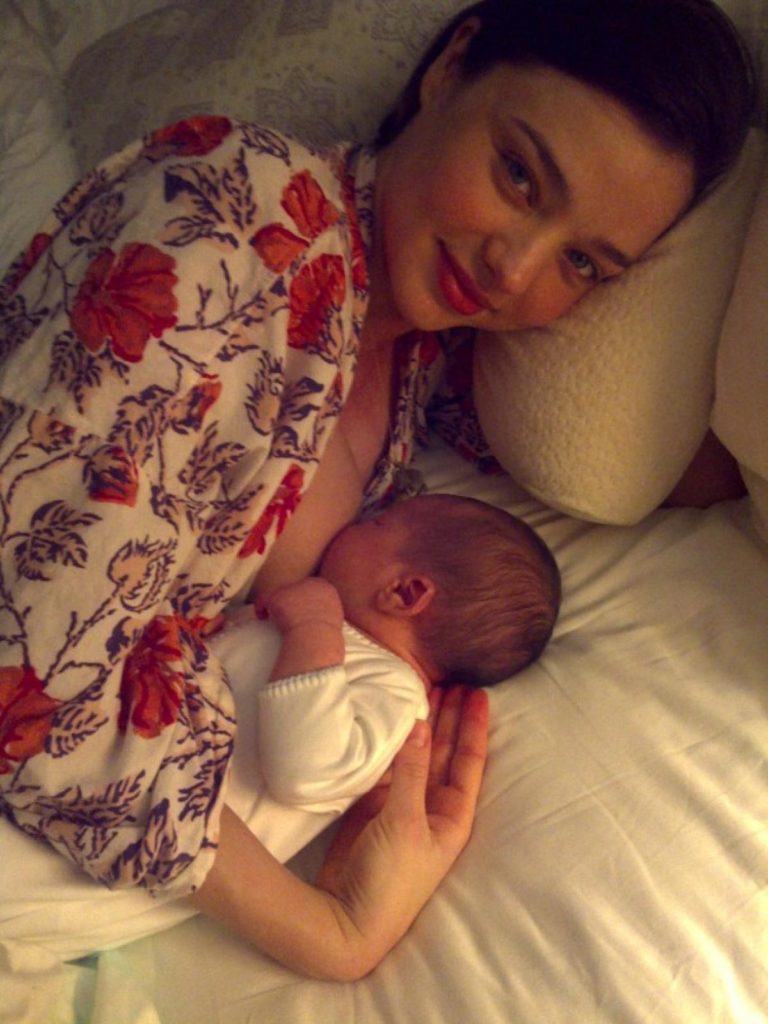 On Wednesday Miranda Kerr, Australian model, fashion worker, and partner to actor Orlando Bloom, announced a painkiller-free birth to their new son Flynn and included an at-home photo of her breastfeeding the delightfully-snuggly newborn.

I don’t know this family, but this brief piece was a ray of sunshine in my day. I believe such unselfconscious and straightforward announcements by celebrities in support of birth advocacy and breastfeeding – as well as lovely candid photographs like this – do a great deal to help the many “regular mums” (and dads) at home watching. Anyone who’s made a study of breastfeeding rates knows that family and cultural support – or the lack thereof – is a critical factor in how our babies end up being fed. In the US, a country with dismal breastfeeding rates (and a concomitant endemic lack of support for the practice), pioneering celebrity families can empower otherwise uncertain newbies. This theory is supported by impassioned activists representing populations with even lower rates than the sum population, such as teen mothers and African American mothers.

I also know breastfeeding, with its oft-innate demonstrable power and its female- and child-positive associations, is extremely threatening to many men and women. Images of breastfeeding and discussion of breastfeeding rights are roundly mocked by all quarters including, sadly, many prominent feminists (such as Erica Jong’s recent piece lumping breastfeeding as being part and parcel with modern motherhood’s “prison”, hinting that required breastfeeding may be imminent and other foolishness. Memo to Jong: don’t get it twisted. It’s kyriarchal standards and cultural institutions that “imprison” women, carers, and small children).

Thus, of course, there were many critics responding to Kerr’s photo (which of course, transcending irony to the nth degree, shows so very much less flesh than the Victoria’s Secret work she’s done). Australian health advocate Dr. Samantha Thomas’ post on the responses to Kerr’s photo reveal some of the less uncivil (but still profoundly wrongheaded) commentary. Included are body shaming (yeah, I know – directed at a supermodel), accusations of vulgarity and inappropriateness, and slut-shaming (you can see more examples of misogynistic commentary here). Bizarrely, some commenters criticized Kerr for wearing makeup in the photo while the Daily Mail piece claims she’s wearing none.

I was very fortunate to raise my newborns in a breastfeeding-friendly culture (in fact, sadly, many of the women I knew at the time did not seem to realize how counterproductive and cruel anti-formula-feeding language can be). But when I see negative responses to Kerr I have that oppressive tingle: a near miss. Had my circumstances been different, stories like Kerr’s and responses to them could have had a tremendous effect. As it stood, I had fewer barriers than many when it came to breastfeeding. My body cooperated with me, the babies did well, my practitioners supported us, my family could feed ourselves on my one income which in turn meant I had a partner who was able to do what it took to make things happen (I was a chemical engineer at a paper mill – my husband Ralph brought me our newborn twice a day), and the children and I enjoyed the process. Other families aren’t so fortunate, and many women need more help and more cultural sustenance – including the emphatic support of the public that yes, they have a right to feed their child the way they choose. At least in the US, we are failing miserably in that regard.

So today I’d like to extend, for what it’s worth, my deep appreciation to Kerr and her partner for being brave enough to go public with something they have every reason to celebrate. As one mother to another, I hope she finds friends and supporters to help her and her partner in their new journey.

It looks like things are getting off to a beautiful start.