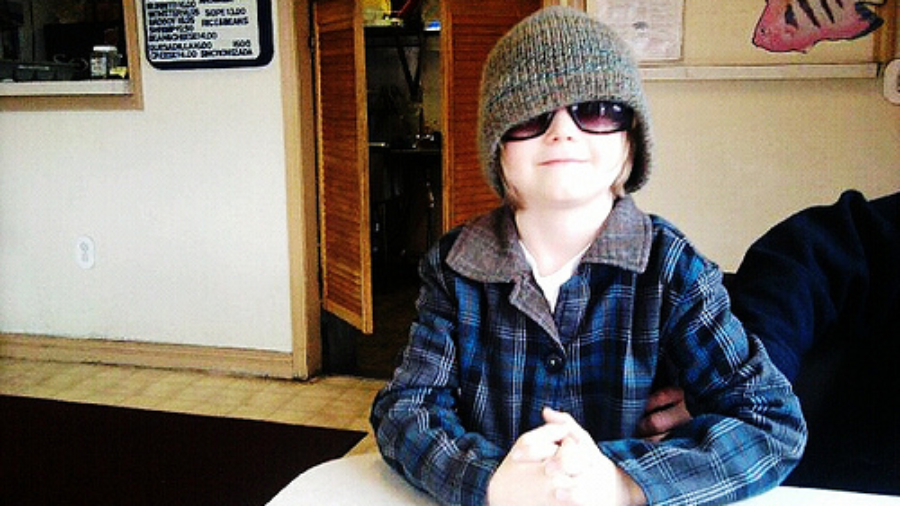 “Gracias por la ayuda con la lengua,” I tell the fellow as he ducks back through the kitchen with my horchata. Good lord I hope that’s not a double entendre. He smiles and says “De nada”.

By the way, a few minutes after this exchange I was deeply involved with the Best Thing Ever, not just because hunger is the best sauce and I hadn’t eaten all day, but truly these tacos de tijuana (as I think they’re called) are so delicious tears forms in my eyes within the first few bites. They’re full of butter-sauteed shrimp, mozzarella, bacon, garlic, and (usually, but I skipped it) onion. The guacamole is tart with lime, fresh and creamy and with that perfect bite of raw onion (shhh… the only time I eat onion is fresh and on Mexican/South or Central American cuisine)! The horchata cold and sweet, the tomato firm and flavorful and sliced exactly as I would do if I were making it for my favorite ever grandma. Good lord. Just typing about it now I’m reliving it, and I’m only sad I can’t go right back and get another order.

A few minutes later and the boys and I are heading out, carrying a wrapped parcel for Phoenix, enchilada de pollo con todo el parte.

Recently: the weather has swerved back into rainy and grey and dismal (Surprisetown: Population Zero). I’m taking deep breaths at night to quell the anxiety (also: Percocet). Back to my one-day-at-a-time survival work. Finding  “good enough” in my constant self-administered performance review, enjoying the lovely things I have in my life daily.

Which brings me to today’s Hogamoment of Zen: have I mentioned we have four cats? FOUR. Goddamned cats. Ralph spends roughly half his hours buying cat food and litter, also vacuuming. The cats help him out. By doing shit like this: Oh, did you want a closer look? Don’t worry. The other chair is being cared for too: