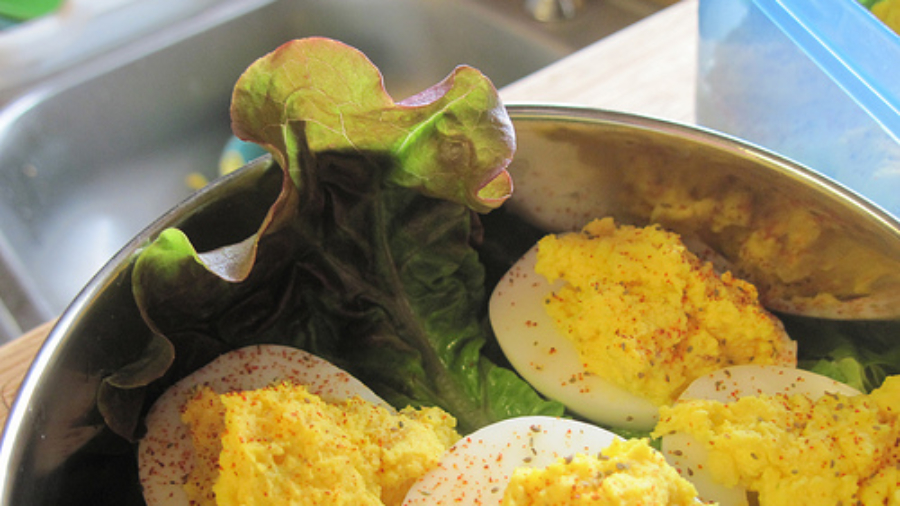 It’s pretty obvious, to me, the kids and I are creating some pretty incredible memories with regards to our little “restaurant”. Today: we emulsified mayonnaise (which failed, my fault, leaving me with a sink full of oil-soaked dishes and cutlery to tackle with my nonexistant water pressure, and the latter is no joke). The kids then packed themselves up and went off in the sunshine – together, they would not be separated – to Grandma’s to steal some mayonnaise, then home for washing up and: slicing homemade bread, salting rich-red tomatoes, washing and tearing lettuce, dressing avocados so they wouldn’t brown, assembling and wrapping sandwiches, installing chips and folding slices of pickle in wax-paper squares; sliding rich from-scratch birthday cake (with candle!) into parcels, preparing devilled eggs on a bed of red leaf lettuce, slicing navel oranges just right.

I show the kids the various methodologies I use to prepare food, skills will be in their blood for them to use or no, but for them always to remember the pride we take in cooking, and Nels and I finish the stacks for our customers including the little note we send out, personalized for each client. Phoenix vacuums the living room and rousts the cats, just a bit, so it won’t be terribly decadent when our visitors arrive. Then Ralph gets home and puts Nels in the tub (to tame his giant blonde mop of hair, mostly) and at least for our new customer, we make sure he emerges wrapped in a towel instead of nude, and he greets the man by name right away.

But the best part of my day personally was somewhere in between inception of the meal and customer delivery, where after our little boxes of BLT(A) and chips and pickle were on the counter, the kids requesting their own fare and going outside and waiting and knocking and getting to serve them, and how much they exclaimed in delight over the food, and Nels joyously said, “This is the best chocolate cake I’ve had in my life!”, and I had it with the pink candles he’d requested and all.