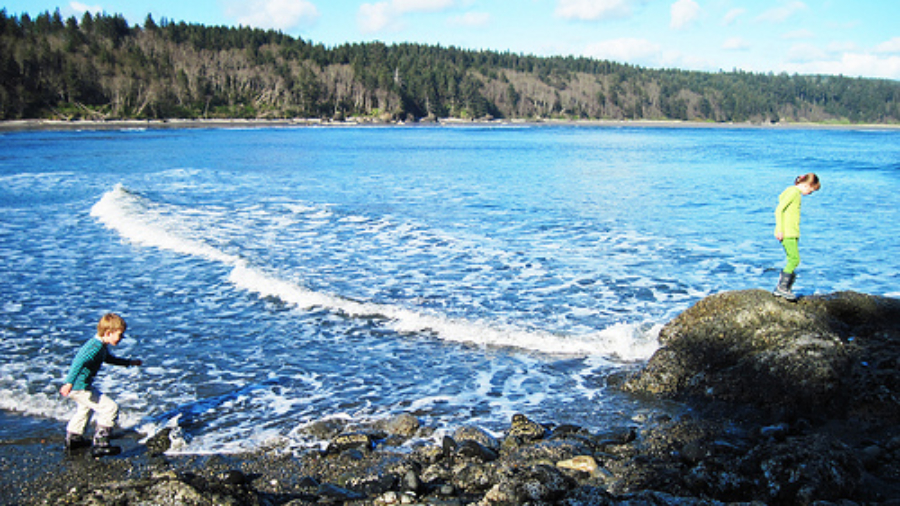 I have to mention, I had the greatest day with the kids on Friday. The night before I got up to looking up tide tables and weather for Taholah, and as it turned out everything was in order – and I had access to a vehicle, my mom’s truck. The kids and I had tacos for lunch, I paid a few bills in town with exact change Ralph left me in envelopes, and we drove directly north, destination Point Grenville. I hadn’t spent much time on the Quinault Reservation beaches since I was a little girl and my mother worked for the BIA; the trip ended up being a little nostalgic. We drove into Taholah proper to get a beach pass, asked for directions, and found ourselves on the most deserted and wild point with a fierce sea crashing at us.

And we just ran around. For hours. The kids were hungry after all that climbing and dodging waves and tidepooling. I threw them in dry socks and shoes (and in Nels’ case, pants), then asked if they wanted to go to a “fancy” restaurant, salient point being perhaps you can’t take your footwear off nor crawl under the table. They were very excited by this and so we headed a few minutes south to the Ocean Crest, a restaurant I’d known of (as family friend Stephen had worked for some time) but never visited. I had no idea if they were reservation-only, or what to expect, or if things would work out in any way.

But it turned out to be one of those wonderful experiences, and an excellent and fulfilling meal. I had a crispy-fresh ceasar salad (even the anchovies on the side were first-rate) followed by a pasta dish with winter squash, goat cheese, brown butter, sage (some of it caramelized – delicious!), and truffle oil. You know the movie scene where someone takes a bite of a delectable dish and closes their eyes and flares their nostrils and looks transported? Whether it was from all the fresh air, all the beauty that had surrounded us, the excellent service, or the chef’s expertise – or likely, a combination thereof – this was my experience. Even the coffee was exactly right.

The kids had a wonderful meal too, and have been talking about it ever since. I spent all but four dollars of our three-day grocery money on that meal and tip. But it was worth it. Not just because the food was such an exciting experience – and because I got to see Stephen on his next-to-last day after six years of passionate employment there – but mostly because the kids were Entirely. Thrilled. With the entire day, every minute. They gave me many grateful and grave “Thank Yous” and told me in explicit ways why I was an excellent Mama. After dinner we ran around on the windswept – and now, frankly, a little cold – beach, and then to Hoquiam and the arms of their father, who’d missed his typical experience: seeing them upon his arrival at home.