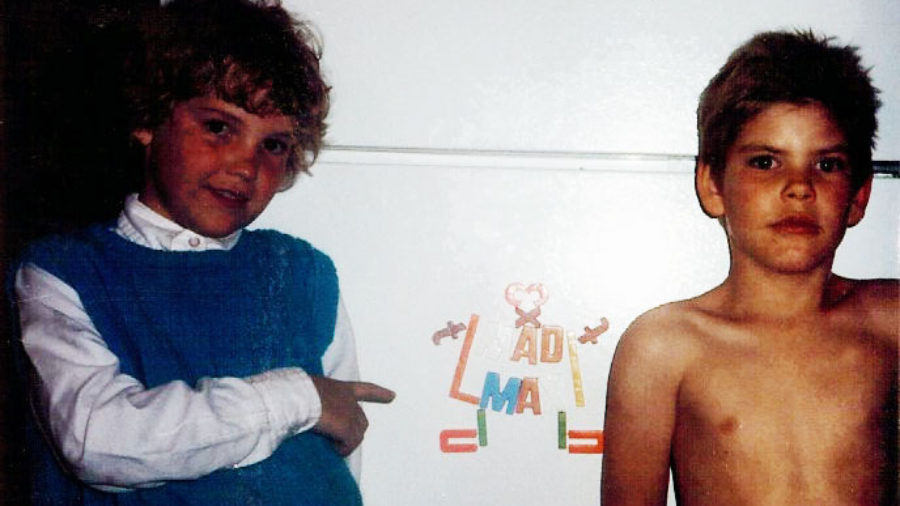 Myself, Billy. And our fridge-magnet creation we dispassionately display here: “Mad Max”.

Today is my brother’s thirty-third birthday. He and I were born a year and a half apart, more or less, so his age is about as easy to keep track of as mine (this endeavor grows more difficult every passing year, especially as my basic arithmetical skills have atrophied).

It was pointed out to me yesterday the people we have the longest relationship with in our life are our siblings – not our spouses or partners, friends, or even parents. Holy shit. I hadn’t thought of it that way. My half-sister Jules and I weren’t raised together and I got to know her best the brief time we both lived in Seattle, while I was attending school – and of course, I get to know her today, I’m fortunate to. Having been raised with my brother, and without my sister, I can say it sucks not to have known her more, had her as a regular part of my life.

But still, back to Billy, his big day. I’ve known him ninety-six-point-five percent of my life. I can’t remember a time without him. He was a sweet boy and the grownups (in my opinion) didn’t give him enough of the right stuff. It seemed to me like my mom worried about him and prodded him to do better in school (he was a straight-A and B student), more socially than anything else, whatever that meant as he always had friends and teachers liked him. Family told us “they” (who? teachers? family?) thought for a time in early childhood Billy was “retarded”. Yeah, “retarded”. You heard right. I don’t think my mom, brother or I use that term anymore. Anyway, I mean just the way it was said, not so sensitive nor apt, not because if he’d been neurologically atypical I would think that’s a bad thing, it was fucked up as there was an unspokent judgment in that whole story: you know, be like everyone else whyont’cha? (product of baby boomer mentality)

I mean like I said, this was a student who did fine and a boy who always had friends and had a lovely character. Yet almost every year on his report card a teacher would write, “Billy needs to finish things on schedule”. These teachers always meant their schedule of course. If Billy had been my son (I know, weird), my eyes would have rolled ’til they clicked and I’d have said, “Fuck your schedule.”

Because Billy was, and grew up to be, and is to this day – as far as I can tell – a detail-oriented, kind, caring, intelligent person with a deep love for his close friends (of which I am not sure I am one … yet), a strong commitment to his work and a desire to do it well (both our parents were this way, except, notably, our father when it came to home repair projects). He’s ended up in a detail-oriented position with employers who love him, and he them, and he takes deadlines seriously. He’s the same as he was when a boy, or at least all the good parts. As far as I can tell. He’s a bit private and I only know him as well as he lets me. I think he did pretty well or has so far because mostly he got love from our mom and dad despite their shortcomings.

Our dad was kind of a dick to him, by the way. Again, at least I think so, I don’t know if anyone else does. Shortly before my dad died, but when he could still get around, he showed up at my house on Eklund and rambled about Billy and how he, our father, wasn’t as tender and loving as he could have been, and he thought Billy suffered because of that. It was weird, my dad talking to me like that because that isn’t how my dad talked (adulthood – I only remember him hugging me and saying “I love you” to me just before he died). Anyway after a while of this sitting there having coffee I said to my father, “Shit, it sounds like you need to talk to your son, not to me.” I don’t know if he even did. But then Billy wasn’t there when dad died. So there you go you old weasel, you get like you served up.

Billy and I are so physically different it’s funny. He’s thin and I’m plump. (Our parents used to tell me not to bully him because one day he’d be bigger and would retaliate. I think I still outweigh him by about forty pounds.) He’s dark-haired and olive-skinned (but pale) – like our sister – and I’m fair(ish). He can grow quite the beard and I can barely manage a mustache. We used to make jokes when we’d go out in public, as if we were perceived as a couple and somehow people also knew we were brother and sister, and were creeped out.

My brother is hands-down the best listener I’ve known. He’s also been so supportive of my parenting and marriage as far as I can tell. Get that, I just told you our siblings are who we know longest and I have this loving guy who’s a great listener and supporter. He’s also very funny and we share a lot of jokes. I’d like to think we can make new ones, not just have the old ones.

I can only speak on my brother and his childhood from my perspective, and I can’t know if he relates at all. I think about him often, and I’m always glad to see him or hear from him. I am glad he has a good lady in his life and great friends and a good job. And I send him – regularly – pictures and videos of our cat bullshittery (LEGION!) which I know he appreciates.