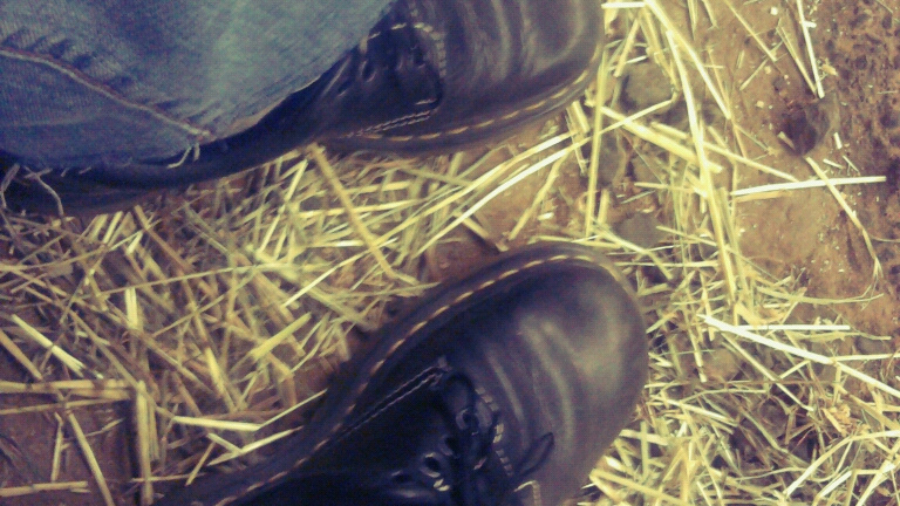 I’m laying in the bed next to my son and breathing and it seems interminable to think of riding in the car twenty minutes to the County Fair, let alone walking about. At least Friday it won’t be so crowded during the day, lots of people working. I want to be there but I’m sick – a sore throat, nothing serious. I should have taken it easy when I had the chance – but I didn’t.

So now I know the kids and the spouse will be shattered if we don’t go to the Fair today and if I don’t go with them. I practice some meditation. “Breathing in, I know I am breathing in. Breathing out, I know I am breathing out…” Then after a while some mindful healing (I hope): “Breathing in, I am aware of my heart. Breathing out, I smile to my heart.” I continue with loving awareness afforded to many aspects of my body. I am especially kind to my throat, my eyes, and ears, as they feel pain. I practice this for a few minutes in the car while the family enjoys the sunshine blowing in through the window; halfway to Elma and I’m feeling better.

We park and then walk past the Fair gates and take the children directly in the order they requested: first, to the information booth where you might need to go to sort yourselves out if you or your grownup is lost (the kids have a phone and so do I but, in case theirs gets lost on a ride); then to see wolves, a favorite Nels had read about in our local paper a few days ago (and we note the time the wolves will be brought out for public showing) – and finally, to purchase the children bracelets that allow one to ride as many rides as many times as they like. Nels has grown six inches in the last year and is eligible for almost every ride – he feels awesome about this.

Ralph and I ride the ferris wheel with them which gets me all set to puke to see my kids in the car next to me, so high up. Then we leave the children to their cavorting; my husband and I eat and walk through the livestock barns and talk to friends and check out dairy cows (Ralph has an empty coffee cup at the ready to catch any errant milk) while the kids cavort on their own. At 3:30 we’re reserving first-row seats for the wolves – a presentation by Predators of the Heart. There are many beautiful creatures in cages but I’m struck most by two pumas – incredibly powerful-looking and beautiful but lolling about like my own cats. Until a fella jumps from behind somewhere and hands them two large hanks of meat-on-bone and the cats snarl and leap quicker than I could have imagined, the sounds were like pre-recorded cat-snarl but it really came out of their faces. Or like my friend Abi said – who wasn’t there but was nevertheless correct when I told her via IM later – “just sitting there like ladies at the opera – until they smell flesh.” A few minutes later and there was no sign of bone or skin or anything and the two were rolling about licking one another’s faces.

The show started and as predicted the animals were beautiful; and it was lovely to see so many children, little ones and older ones, exposed to the animals. I always feel conflicted about wild animals in captivity but I was relaxed and taking it easy today; nothing to fight. Nels asked if he could pet wolves and he was one of only a handful, in a crowd of about a hundred, that was permitted, much to his satisfaction. He was quite serious about the whole business.

At the conclusion of this hour-long event I had to go home. I was dizzy and felt awful. We pulled up to the house and I staggered in and pulled off socks and shoes and read then slept a while on the couch, in and out of a gentle slumber as my children played and Ralph cooked them a simple dinner. When I woke again at eight Ralph escorted a ladyfriend to a baby shower (my Purple Spooky found a home!) and when I woke I made the kids hot, fresh crumpets which were incredibly delicious and we watched a bit of nature films and I started on a new knit hat for my daughter, for the fall. Nels and Phoenix on the ferris wheel; his first time without a grownup by his side. My little girl waits for Ralph and I to disembark; Nels is already long gone trying to get a hustle going. Agriculture barn and its various pelts and what-not! I wish I could have got a better picture of this tiny, tiny pig. About four species of snakes stuffed in his clothes This rabbit, a Flemish Giant buck, was fucking huge. But seemed gentle.