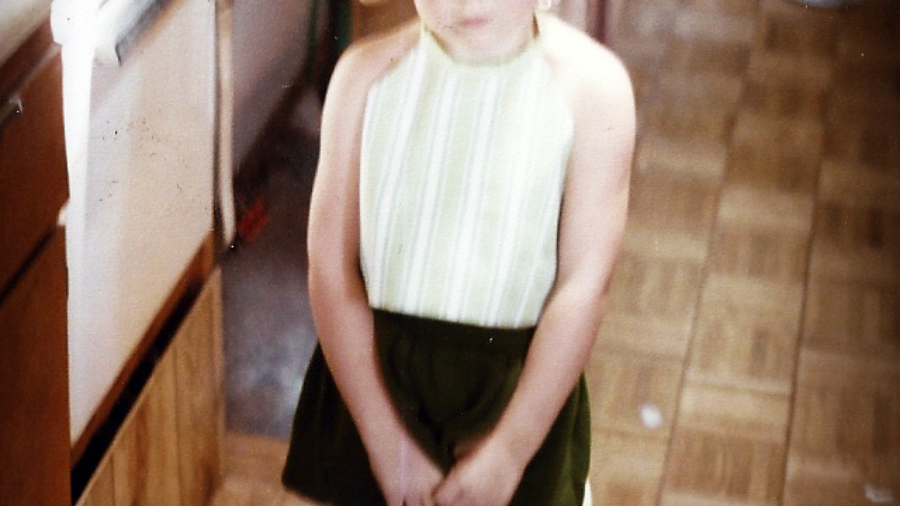 My first day of school, first grade
Taken in the bus we lived in

The family I grew up with until about age eight, my maternal family, mostly what I remember was a messy and boisterous tribe who started childbearing a bit later in life, consumed spirits by the case (or in the instance of wine, the box or gallon jug), smoked a fair degree of pot (some of them way more than others), and mostly wanted to eat and drink and have a good time and certainly never wanted that to end. The parties around the bonfire singing and playing music (old stuff from the sixties mostly), must have been fun for many but I grew them into a resentment. Most everyone worked hard and drank hard too, although a few members dropped out of much employment. As far as I know, I’m the only alcoholic in the family, but it seems like there sure are a lot of drunks.

In my memory my grandmother never much quit smoking cigarettes her whole life even though she ended up needing a breathing apparatus and assistance. She died of alcohol- and smoking-related complications but to my knowledge the family didn’t name it thus. You know, just a mystery stroke I guess. I got to be there for her death – myself, my husband, and the start of our own family: our four month old daughter. Many sorrows were ahead for my husband and I along the lines of our family inheritances, but at the time we didn’t know this.

My childhood experiences contain many hurtful memories, although in that family it was requisite we describe ourselves and our relations as “warm and loving”. Despite this mythology, I perceived I was only enjoyed and loved when I was being adorable – or a Good Girl, or both. I was told girls were supposed to be beautiful, and certain girls in the family were praised as such, and since I wasn’t, at least I knew where I stood on that count. At the same time I remember at a very early age believing there wasn’t any adult I could count on to choose me and my brother and our sense of safety, over their drinking and drugging. Since I was so little I was powerless to change any of this.

In addition to the drinking and drugging, which invoked a fair degree of fear as years went on, there was just daily life. The adults in my life changed, like chimera, during the day and as evening wore on. I rarely knew what was expected of me, only knew if I was meeting approval or not. One minute they’d be mostly tending to their work or the kids – or, as is more likely, ignoring us – the next they’d be overly sentimental, lachrymose, and effusive – or toxic and full of venom directed at little Me, their faces flushed and hardened into set-jaw choler beneath small angry eyes. My character defects and my errors, my objections to unfairness, any assertion of my own will counter to theirs, and my crudely-expressed desire to be treated with dignity was not ignored – it was punished. By age two the family called me “Little Hitler”, and later cited this as funny, good thing I straightened myself out, I was such a willful child.  Later an adult from this family would tell me it was okay for me to lash out against my own children. “They have to understand that you have feelings too.”

Oh, I made sure my kids understood I had feelings alright. Just the way I had done to me. As a mother I was Feelings ran rampant.

But, that was later – my own family.

Back to my childhood: relatively early in life I discovered I was capable at succeeding in school, and this performance placated these adults and put me in a category convenient for them. I wasn’t the beautiful one or the good one – I was the smart one.

I certainly wasn’t in a position to perceive that these people were sick and suffering in their own ways, and coped via chemicals and Authoritarian parenting and gastronomical excess et cetera, simply to manage their own pain, stress, confusion, depression, excitation, and suffering. They did the best they could with what they had. In this way my story is hardly unique, nor is my family.

As carefully as I’ve laid out my childhood memories, I want to further impress upon the reader that I do not hold resentments over these events – not anymore. In fact, the release of resentments has been the greatest gift I’ve afforded myself, and it was only possible through some measure of divinity (the old adage is true). But I am also not going to pretend these things didn’t happen, or they didn’t hurt at the time. They are simply a part of my history.  I know now that not one of these adults wanted me to feel unsafe, or scared, or sense I was an afterthought running around barefoot and expected to be “good”. As best as they were able, they loved the children in their midst, likely better than they themselves had been loved.

By the time my mother, father, brother and I moved north and away from this family to take advantage of an inexpensive living situation, my survival traits were intractable and reflexive. Seen this way it seems I was doomed to have a love affair with the escape available in alcohol and drugs. I remember my first drink – it was at age twelve and I flew high above those feelings of low self-worth, Unacceptability, embarassment and shame. The history, frequency, duration, and behaviors of my drinking career are details unimportant regarding what I write here, and now.

What matters today is I have a story to share with those who suffer as I did. What matters today is I am responsible for myself and others, and there is no point to shame myself or blame myself – or blame or shame others – for the past. I was gifted something amazing in my Recovery, as I could have lived the rest of my life out as others before me have – or far worse.

Today I live on a knife-edge of amazement, a case of being astounded by what has been given. When I am outside walking and the wind is blowing and I feel clear and alive I am also on the verge of an agoraphobic episode, flying off the face of the Earth into the Great Beyond simply because it is so massive and so much larger than I. “Fear of the Lord is the beginning of wisdom”. I am fearful of God, but not in the way most nonbelievers would think this means. I do not worry God is going to bash me flat like Whack-A-Mole and I do not think there is a vengeful power who holds sway. I am fearful because I perceive the depths and breadths throughout, but I can not understand or grasp it all. I have lived for some little time floored at the life I was given, how incredible and amazing it is. It is such a gift. I do not wish to squander it. I do not wish to forget the gift. I no longer wish to poison it or smash it to bits, or smash at other people.

I want to hold so fiercely to my gratitude and never let it go. To life any other way is, for me, a Living Death.

Found written in a notebook: