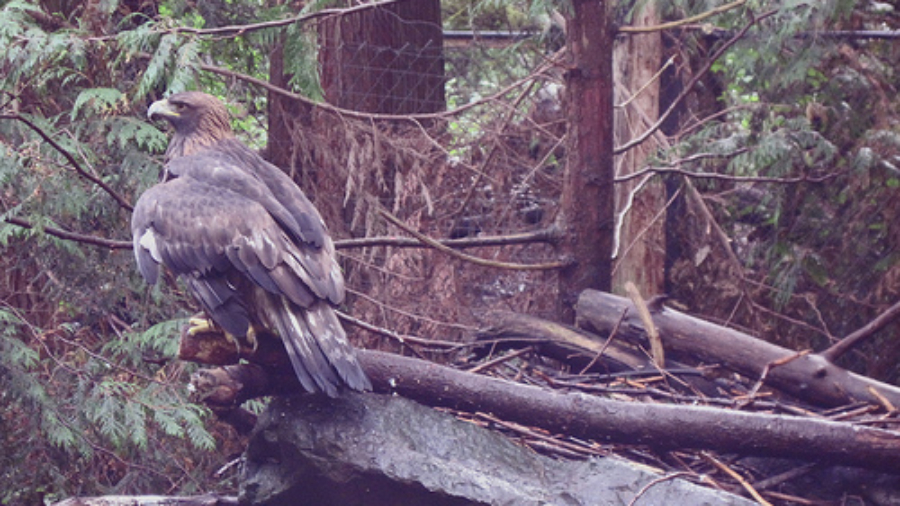 I have been a busy beaver and I owe some photo uploads and some verbiage. However for tonight I’ll just show and tell a little about the trip Erin, Nels, Phoenix and I took to Northwest Trek yesterday. I didn’t take a bajillion photos or anything, because I wanted to enjoy myself fully (which I did). Here’s some of what I have, though. The first animals we came upon were golden eagles, close as life. They were huge and beautiful and perfectly still. The kids ran up and looked and one of them said, “Those are REAL!” From that point on the kids were a thousand percent excited about every animal we saw including some we see at home pretty regularly. Why can’t we all be more like children? We’d live longer. Mike, our tram tour guide. He knew a lot of facts and was quite personable. He also operated a tricky vehicle through terrain full of wildlife and at times up a steep grade, while dealing with people as well! The park was very pro-child, which worked for me. Bison. Lotsa those being all awesome (also: mountain goats, bighorn sheep, blacktail deer, a moose cow, elk). A few minutes after this we saw a baby, about a month old, bright orange. I didn’t take a picture although we rode the tram right by her and she was only a few feet away. Instead I just absorbed how incredible she was and how much I liked being in real-life up close. Phoenix, on the tram. A more helpful and lovely person to be with on the trip, I can’t imagine. Nels and Erin on the tram, having a wonderful time. The three kids and I were seated next to a group of six very very rowdy, bored, fart-noise-making kids who didn’t seem to care much one way or the other and got increasingly agitated. I had such positive time with the three I was with and I felt so grateful I spend my time with children who are where they want to be. Antlers – everywhere. I could have given a shit before this day, but I heard some amazing stuff about them, like how – unlike horns – they grow from the outside in! Kind of wonderful. I got to hold many in my hands later and admire their organic comeliness. The park leaves a lot of antlers out on the acerage for the herbivores to nibble on for nutrients. They are beautiful left out in the field like that. As I mentioned, the kids were excited over every animal we came into contact with, even the deer (which we see more than once a week here in HQX) and the ballsy little squirrels who would CUT YOU for the leftovers in a Corn-Nut bag. Pacific Giant Salamander, or as I like to call it, Pure Unadulterated Nightmare Fuel. This thing was like a foot long. *shudder* A fisher. Or a marten. Something weaselly. I can’t remember. There was also a huge beaver, river otters, a badger, a wolverine, the latter two not doing anything particularly badass. At this point the kids were running full-tilt through the paths near the wolf, fox, couger, lynx, bobcat, black bear, and grizzly habitats. No other humans were around much and it was eerie – and breathtaking and fun! Sure, “statistics”. I see NWTrek is in the pocket of Big Grizzly Bear. I will, however, remain vigilant. Phoenix, and a moose antler about as big as she. A huge, torpid spider outside the cafe. She was beautiful but the kids were running off again and I didn’t have time to set up a good shot. Hungover Owls: the meme is funny because it’s TRUE! This snowy owl blinded me with science, plus it had a half-empty fifth of Jack stuffed under a rock. Phoenix giving me cuddles. I was pretty much in bliss the entire day, truth be told, until the last leg of the journey when we stopped to do some commerce in Oly and I was back amongst crowds of cranky people.

My favorite critter? Hands-down the lynx. It was a massive, prehistoric-looking cat, preternaturally calm and boasting the musculature of an ape. I didn’t even try a picture, I just watched him and felt kind of stunned about it all.

Happy National Coming Out Day! For those who can and choose to, today and any day, I wish you the best. Here’s a vlog entry I experienced as quite touching and real.