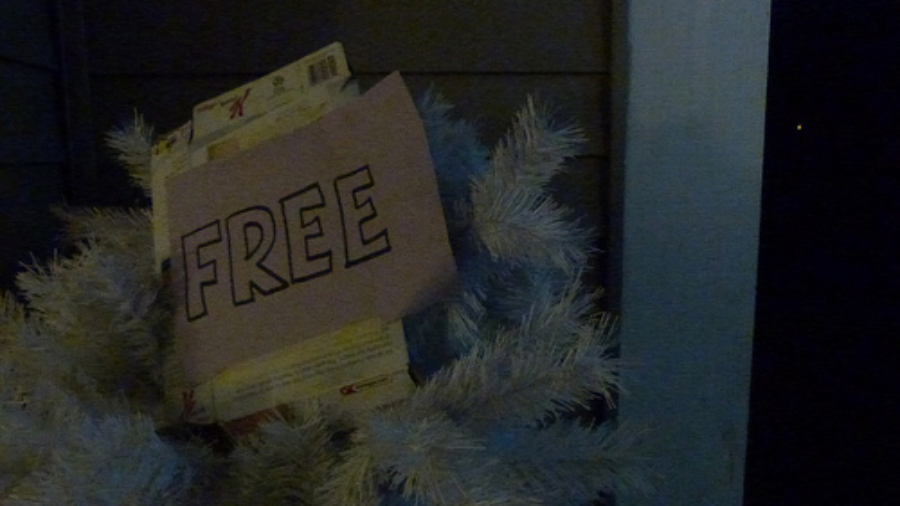 My life could be a little sitcomish, if you squint. Not the sit-coms I watch – well, I kind of don’t watch any. But, kind of silly and down-homey and provincial. Like, this afternoon my kids came and woke me up and they were so kind. I was taking advantage of the kids’ stay-over with my mother – staying in bed until ten or so after a poor night’s sleep. The kids showed up after movies and breakfast of steak and eggs and suchlike their grandma cooks them. (Um, have I mentioned how much it totally works out to live next door to her? It is really, really working out.)

Anyway some time after I get up and shower and pull my shit together, Phoenix cleans her room and I look around for my son while I make tea. I’m not too serious about finding him, as every day I’m half-resigned to the half-private and independent lives the kids often lead during the day. My mom comes over. She’d put out an artificial white Christmas tree on the corner with a “FREE” sign, and looked out the window an hour later to find it gone. All-pleased like she struts over for coffee, to discover the tree on my porch. Delivered by a very satisfied young man in his little suit jacket, I should say. We’re deciding if we’re keeping it, or putting it back on the corner. Nels admits it’s a little early for Christmas, but perhaps we could store it in the garage.

Nels and Phoenix run about outside mostly, later with friends out of school. And by the way, Nels’ four front teeth were recently lost and the new ones are coming in and it’s about a thousand percent adorable. I’ll have to give him an interview on video, for posterity.

I’m sick today – a sore throat. I’ve been laying low and hand-embroidering while watching the kind of television program I do like to watch, mainly really really grim (well it’s either that, or grim but also slapstick). I took the advice of a friend online and rested, and I’m glad for it now that I’ve discovered I’m sick, and my sister is visiting later in the week. A little red meat for dinner, more tea, and back to handsewing and couch-time with family and friends.