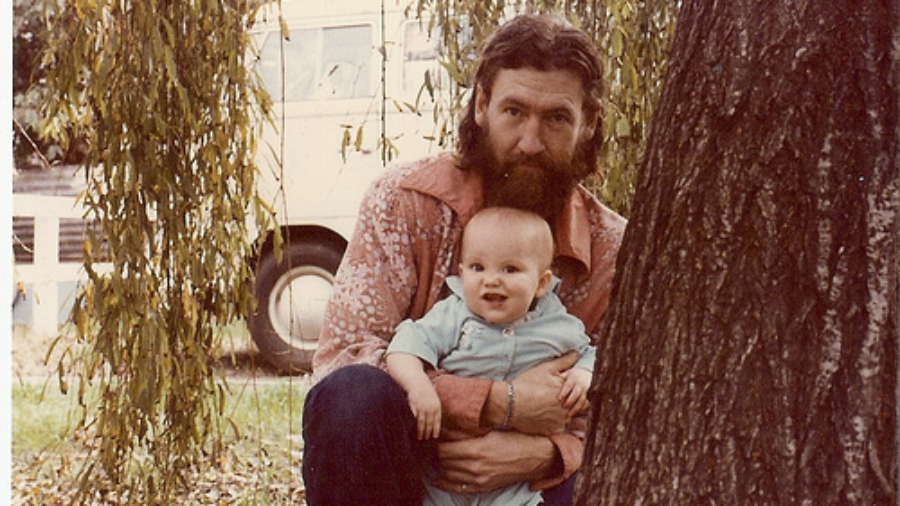 by kellyhogaboom
with 3 comments
writings

I know I recently wrote a bit about my father… this piece, however, was written a while back, at the request of the editor of Grays Harbor College’s zine. Caption: My father and I, Huntington Beach CA

My father was first diagnosed with cancer in 2000. I remember where I was when my mother told me – I was eating a white fish sandwich and fries at, of all places, the Southshore Mall food court. I was stunned to hear the news, although even in that split second it wasn’t the spectre of Death and Doom I sensed. I was shocked, sure, and over the next eight years I’d experience a lot of sadness and sorrrow. But I don’t remember being frightened or angry.

I learned so much during his illness as he received treatment and surgery, then went into remission. During this time I discovered much about him, a lot about my family and friends, and a great deal about myself. I took time out of work when he’d have his first radiation, his first chemo, then his surgery. I travelled to be with him. I do not know how glad he was that I did this, but over time it made me more centered, stronger, calm in my convictions that if I was a welcome presence for someone, I wanted to there for their big journeys. And, thankfully, he was there for mine – I remember he had a fine new growth of hair for my wedding, some months off chemo. That day we all celebrated his life and that of my new family.

Don’t get me wrong, there were disappointments along the way. His illness had been missed a full year before by a doctor who dismissed blood in his stool. I think my mother might have been angry about this. I accepted things as they were – for the most part. Sometimes my mind would churn on the “What if…?” I remember this mind would also hook on strange yet strong desires – like that he could live on and be there when my children graduated high school. Why this particular milestone, I do not know (funnily enough, they’re homeschooled now anyway!). My father, during one of innumerate rounds of chemo. The staff were always so kind and professional.

During this time my grandmother in California fell very ill to a stroke, and my experiences with grave illness were very much with me. I packed up my new husband and baby and we flew down to be with the family, despite some protestations of my employer. She died after five days and I grew all the more. I was living life, not avoiding its terms.

My father’s cancer returned, this time blooming throughout his body. Again: chemo, pills, appointments. He had to stop long-distance running, a passion he’d excelled at since we’d moved to Grays Harbor. In September of 2006 he called us where we were living – Port Townsend, Washington – and let us know there was a job opening in Aberdeen that would be appropriate for my husband. I’m smiling as I write this, because my father rarely called me for any reason. We knew we was asking us to his home, asking us to bring our small children and spend time with him before he left.

When my father died in August of 2008 I was with him. My mother and I nursed him at home with the help of hospice. This too had its surprises and challenges, but it was deeply satisfying work. On August 22nd I stroked his hand and held him and spoke, only a little, and calmly, as he struggled through his last breaths. I felt brave and very Present, filled with transcendant love, shining bright within my body out through my fingertips. When he finally drew his last breath my mother jumped up to make a phone call. It was as if I had all the privacy in the world. I put my head on the bed and cried sobs from the very heart of me, the deepest I have ever cried.

After he died, many expressed sentiments. Some seemed to understand my mind, many did not. A surprising number couldn’t bring themselves to visit, or speak to us at all. I learned a lot there, too.

Brevity prohibits me from listing the many things I learned along the way from my father’s illness, treatment, and death – and especially that year and a half after we moved to be close to him, when every day I saw him I was filled with joy, a knowledge of how precious he was to me. It wasn’t remission or pills or chemo that gave me these things, although I am grateful such options are available to those who want and can have them. But cancer gave me these things, that enlightenment, that knowledge of how deeply I loved, the ability to slow down and savor our time together.

I could write so much and the many moments of deep satisfaction and awareness this process afforded me. But it is not necessarily afforded everyone – my journey was not my father’s, nor my mother’s or brother’s, and they may have very different experiences to report. When it comes down to it, this is what I believe: the journey my father took is one we all take – in some form or other – and I am grateful I do not experience anger about this. Just sadness, and then: gratitude. Life is an incredible blessing and experience.