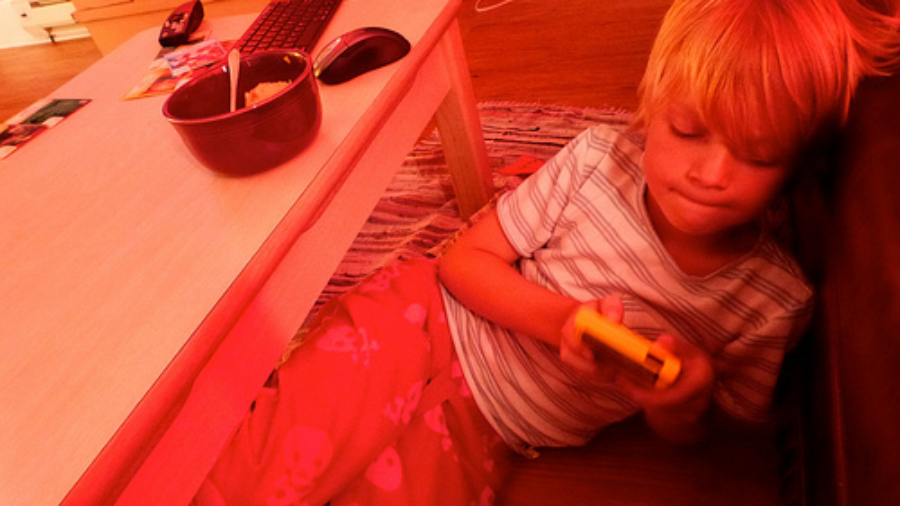 A few of my Twitter followers asked that I elucidate on “ten lists” I’d turned out recently. Here goes with the second installment of my first list: “Things That Make Parenting Easier”, based off my ten-plus years being a devoted and hard-working parent. I hope you find it helpful. That is the only point of this post. To help those who could use it.

Each post will have a picture from my life, my day, when I wrote the post. So from today: here’s Nels, playing on his sister’s (new, to her) GameBoy color, and watching Minecraft tutorials. He’s also eating homemade matzoh ball soup. I told the kids to help themselves to soup while their father and I were at meetings, but to leave SIX matzoh balls for everyone else. I got home and they’d left them in the pot – the six SMALLEST balls. I am proud of their scrupulous consideration of others while also maintaining an appropriate voracity for homemade matzoh balls, which are really frakkin’ delicious, which is why I made a double batch. #2. Do what feels right but is scary. A mistake here & there is better than a stifled life.

I’ve two examples, briefly, of milestones that illustrate this premise. Maybe they will seem small potatoes to you; I can assure you they were crucibles for me.

The first: homebirth. Nine months into the pregnancy of my second child, that’s right, nine months, I started seriously wanting to try a homebirth. I became fixated. I was consumed with the thought, especially given I’d intuited it might be a far better experience than my first birth.

But I was frightened. What if it wasn’t safe?* What if I failed? These were the only two real questions – but tell my mind that, because the inner dialogue clattered on incessantly! I thought about homebirth, and I read about it and researched it. Very soon I’d satisfied myself it was perfectly safe to proceed. But that wasn’t the biggest hurdle. Because: WHAT IF I FAILED? What if I wasn’t strong enough, wasn’t tough enough? What if people mocked me – told me I made a big fuss over nothing worthwhile? Over and over I played these tapes, I couldn’t help it. Over and over I came to the conclusion I wasn’t going to know if I could walk the tightrope unless I stepped out. I remember talking to my doula at the time, and expressing the deal-killer: “What if I labor and labor and I can’t take the pain and I want drug relief, so then I transfer to the hospital?” She told me, in effect, so what. She’d been through a transfer after three days’ labor and she was still very, very glad she’d attempted homebirth. She effectively gave me permission to “fail”. I never looked back after that. I had committed.

Many of my longterm readers know how things turned out. The homebirth was – amazing, one of the best experiences of my life. I owe a lot to the women who helped me. Some years later I saw that same doula in a different county, and I burst into tears of gratitude the second I recognized her. She gave me permission to fail, although she likely didn’t know that’s what had happened. This permission was priceless to me.

The second example I want to talk about came a few months later. My dear friend Cynthia had owned a cloth diaper service long before she and I became friends. We got to talking in her living room like we did every night, and I started to realize I was fixating on cloth diapering for my two small children. I don’t know why, today. Maybe I’d had it up to here with the nastiness of the chemicals in disposable diapers; perhaps I felt a pang about the environmental detriments. Perhaps I wanted to do it for hippie cred. Maybe I was tired of the expense and trouble of always buying disposables. Perhaps it’s my love of laundry and cleaning and sun-drying cloth – or just my love of fabric (I am, after all, an ardent seamstress). Perhaps a dozen other things. All I can say is: I had a desire in my loins like a flaming, golden Hawk.

I switched my kids into cloth diapers when my son was a couple weeks old. I instantly had two children sopping wet, all the time. I think for about two weeks, as I didn’t know what the fuck I was doing. And I didn’t have the funds to buy cloth diapers at the time I hatched my plan (another reason it was a “stupid idea”) – but again, women came through, loaning or  gifting me a tremendous supply. In no time the money I was saving not constantly buying disposable diapers allowed me to buy a very nice diapering setup. I used these diapers on both my children for years, then gifted to a local woman. They are still in use almost a decade later!

Scary. I’ve faced a lot of scary things. Leaving an abusive boyfriend: scary. Abortion, all on my own and left in a rundown hotel at age 17: scary. Recovery from alcoholism: scary; working with fellow alcoholics and addicts: scary. Deciding to homeschool and THEN deciding to unschool: scary. Being married to a man I’d come to hate: scary. Nursing my father in hospice and through death: scary. And more.

Every single thing mentioned above has yielded me the most amazing dividends in life experience, faith, forgiveness, heartbreak and unconditional love. These experiences, and how they transformed me, have been the cornerstone of my spirituality.

Not everything that was scary in my life always felt right; but I’ve no remorse over the scary things I tried that were primal desires for me. I’ve no remorse, regardless of the outcome. How do I know if it feels right? It’s when my gut says, “DO THIS”, and my head starts in with a racket. TRUE STORY things my head has told me: I can’t possibly do this, I don’t deserve it, THEY don’t deserve it, I’m too busy, I’m overwhelmed, they can’t expect this of me, I’m not a saint, I’m not smart enough, I’m not strong enough, I’m too poor, I’m too fat, I’m too ugly, I’m not “expert” enough, my husband will be upset, it will hurt my mom’s feelings, my friends will mock me, no one will like me, people will be mean to me. The list goes on. My head can tell me shit all day but when it’s yakking out of – you guessed it, Fear – I don’t have to obey. I can look a little deeper and find out what I truly, truly want.

The best news of all is, when I decide to go for something scary, I’m not alone. Ever, unless I want to pretend to be (it sounds foolish but we do this; it causes a lot of suffering). Tomorrow I’m going to talk more about that whole, “you’re-not-alone” thing. It’s no coincidence the times I healed and grew most vibrantly were the times I sought help with whatever particular Vision Quest, to borrow a phrase, I’d set out on.

But for tonight: be brave. Think on the times you have been. Honor your courage. It makes life worth living to the last drop.