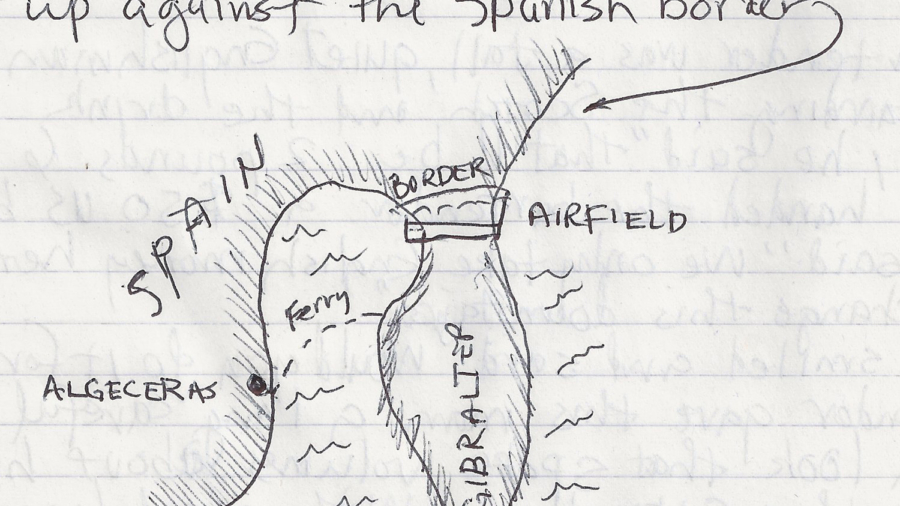 My father passed away on August 22, 2008. In honor of Veteran’s Day (he served as an Electronics Technician on the USS Reclaimer) I thought I’d start posting the journal he kept shortly before he died. I’ll keep posting them as time permits. A few photos are included.

After discharge from the service in Feb ’69, my buddy Tom* and I flew to Europe and began hitchhiking around. Bottom line – we end up in Algeceras, Spain which was on the Mediterranean coast. It was the only way to get to the Rock of Gibraltar. The Rock was occupied by the British as it has been for hundreds of years. The Spaniards were trying to squeeze them out, so they closed off the land route to Gibraltar and you could only get there by boat. So we stayed in Spain (’cause it was cheap) and rode the ferry to the Rock, to snoop around the stores and, of course, climb the Rock itself.

So, one day, while on Gibraltar, we decide to walk out to othe airport on the peninsula @ La Linea. It was a small airfield, perpendicular to the Peninsula and right up against the Spanish border. 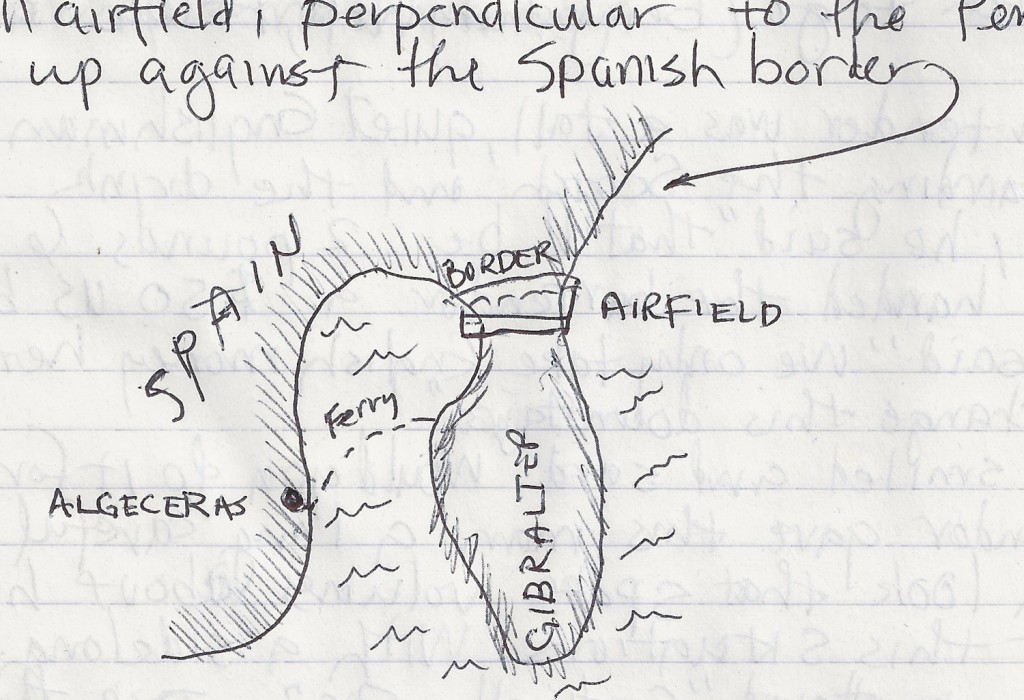 There was a small terminal building containing: the tower, a couple duty-free shops, a money exchange (more on this later), and an upstairs duty-free bar. The money exchange place was necessary because the terminal was British-run. Only English money could be used in the various shops in the building and, indeed, anywhere on Gibraltar.

So Tom and I got some English money and went upstairs to the bar for a drink. We sat overlooking the lower terminal floor, watching people come and go. We noticed this tourish come through the door, past the sign explaining only English money was used, and up the stairs to the bar. He nodded to us as he headed to the bar. He was a big man, a little overweight, about 50 years old, dressed in khaki shorts, a Hawaiian type short sleeve shirt, and flip flops. He had a 35 mm camera around his neck.

Stepping up to the bar he ordered a drink and a bottle of Scotch to go (being duty-free, it was a good price).

The bartender was a tall, quiet Englishman about 50. Handing the Scotch and the drink to the tourist, he said, “That’ll be 2 pounds 6 sir.”

The tourist handed the bartender a $50 US bill. The bartender said, “We only take English money here, sir. You need to exchange this downstairs.”

The tourist smiled and said, “Would you do it for me?”

Now the bartender gave this man a long careful look. It was a look that spoke volumes about his feelings about this situation. With a sidelong glance at us, he muttered, “Certainly, sir,” took the money and went down the stairs, leaving us and the tourist alone in the bar.

The man turned to us and smiled. “Yeah,” he said, “Just flew in from Marseilles. Going to Madrid for 2 days, then Lisbon. Then back to the US. Spent 2 days in Paris. 2 in Copenhagen. 2 in London.”

My friend, Tom, studied the man through half-closed eyelids, then he spoke – “Why’d you bother?”

The man was taken aback – “What do you mean?”

Tom said, “Why come here if you are going to skip around so much. You won’t get a feel for Europe.”

The man turned sullen. “It was a cruise deal.”

Tom said nothing. There was an awkward silence, broken by the return of the bartender with the proper coinage. He counted out the American’s change and handed it to him. Said, “Thank you, sir,” and returned to tending his bar. The tourist finished his drink and left. Tom and I rose to leave and, in doing so, exchanged more glances with the bartender. He knew that man was an American and he also knew we were. I felt bad being associated with that insensitive type the but the bartender remained non-committal. He bid us “Good day” in an honest and forthright manner. By the way, I called Tom this afternoon – thanks to Google, I was able to find him. I miss my father very much.