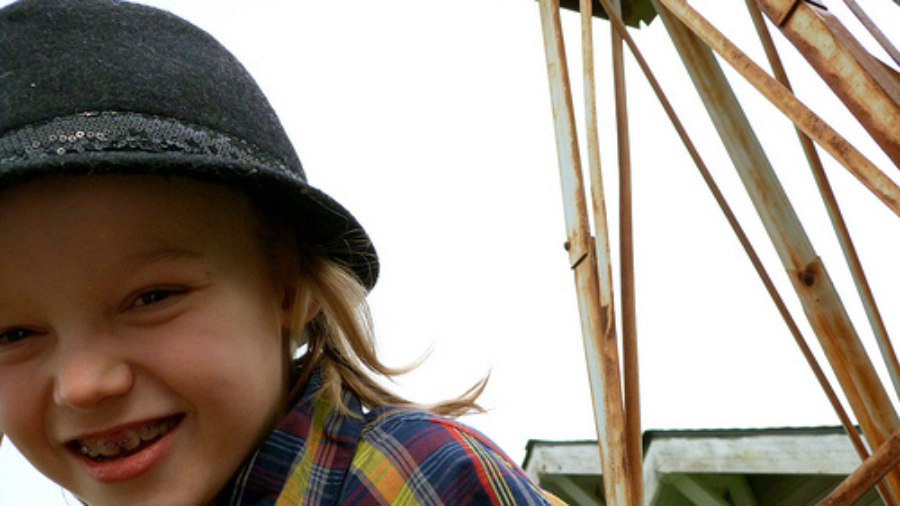 My son is tired, and so am I. It’s not even that we got up all that early, or rather it’s not just that. Because yeah, I’m a little low on rest, it’s true. Last night I got to bed about three and was up at seven. Took Ralph to work then as today was payday, shopped: hauling hefts of laundry soap and cat litter and toilet paper out in the pissing-down rain. Home in time to wake my little sleepy guy and give him some hot breakfast before cleaning him up and hitting the orthodontist’s.

He was a champ there today. My kids are not used to being spoken to like second-class citizens, or herded like cattle, in their home or by teachers. The handful of adults who behaved this way today were met with my son’s civil but frankly-confused air of disinterest. The adults who talked to my son directly – spoke to the real person he is – were met with his lively interest and cooperation. My son selected hot pink for the color on his braces. I was surprised to watch him lie very still for the procedure, which I know was quite uncomfortable due to his dislike of having his mouth pried or held open. Anyone who knows Nels will recognize his cooperation and stillness as some maturity, or a sea change of some sort anyway. Right on his timeline, as it should be.

Home in the early afternoon, after he and I stop for tacos. Phoenix’s attitude on her brother’s new orthodontia is appraising and collected, yet warm and affectionate: a mentor who knew her protégé would withstand seven-G spaceflight, or the sermon on the mount, or a hike into the Amazon. In the car, off to the feed store, my children discuss practitioners for the benefit of their friend D.’s audience, reviewing physicians past and present like little wizened veterans of many seasons’ tooth care. They discuss the euphemisms of a previous dentist’s office. “Remember the ‘raincoat’?” Phoenix asks her brother – a dry flat sarcasm. Nels laughs airily, his lips and tongue working over his new metal-mouth. Then he adds as an afterthought: “Well, they’re not around any more!”  As if by our family’s change of venue the practice itself was long-ago reduced to some rubble-laden wasteland of sad dentistry dreams.

We get home after the braces and a handful of other errands, including some work at the treatment center where I was re-reminded, vividly, of my place in the world. I heard it said the other day: if we all threw our problems in a big pile and looked at them, most of us would scramble to get ours back. This is me, and how I feel today, despite having a rough couple of days. I’m very grateful to be taking care of my family – able-bodied and of sound (enough) mind and spirit.

In the kitchen Nels and I make up a large batch of bread pudding from a delicious local bread, salt, cream, spices – and fifteen eggs. Nels loves, loves the idea of cracking fifteen eggs and making something that requires fifteen eggs. He pours in vanilla and sugar and rum extract and shouts happily at the delicious smells of hot butter and warm nutmeg. I’m tired, still tired; moving at that steady pace that speaks gratitude, gratitude, gratitude.

And now: it’s almost eight and Ralph’s away for the evening. I’m heating the bathroom up for my daughter to have a bath; warm blankets and knitting on the couch; homemade bread pudding and a BBC mystery programme.