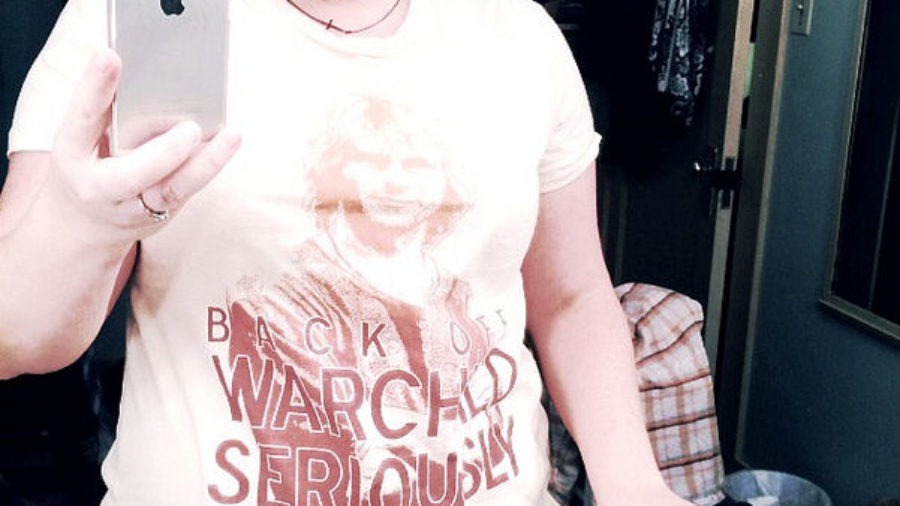 Today was rough. About an 11-hour day on my feet, out of the house. A few responsibilities that didn’t feel so great, tackling them. I thought about reneging on what I said I’d do – but in the end I did what I said I’d do, so I’d know that is who I am.

I have good days – and some days I have growth days.

Rehearsal, as busy as it was, was where I found a few moments to myself. Backstage. My eyes are drawn with a Sharpie.

No peeking on any of my costumes. Y’all are going to be so impressed! My castmate J. & I today onstage. She is perhaps the sweetest person I’ve had occasion to meet of late.

I’ve thought a lot about working in this play rock opera. My original intention was just to audition – that was all. I was determined not to be too shy to do so. I didn’t know anyone, or know anything about theater, but I still went for it. At the time I didn’t think I’d be asked to participate. And even after I was asked, I didn’t expect it would be as much work as it is.

Every step of the way I’ve had the opportunity to think about who I want to be, as a person. I’ve met new people – all of them passionate, and all of them working hard to put a good show together. Not everyone is kind to everyone else. But I can be kind. And in a hundred and one ways, I’ve been tasked with showing self-restraint as the production forms. Believe me, I can think of questions faster than a scene can unfold – and I can think of direction I’d give if I were in charge (um – I’m not.). I’ve tried to be helpful where I can – and to be encouraging to all. I’ve opened my eyes to how much other people know, things I don’t know – and it’s an impressive lot!

My family has had the opportunity to care for the home, and themselves, without me. Not only without me physically, but with a very tired Me at the end of the night.

So far the production has been a great deal of work, and more time than I’d thought it would be. One thing is for sure: I don’t regret auditioning. I don’t sit there and think, I could do that, because I actually know, because I’m actually doing it.

Coming home wired from rehearsal at nine, or ten-thirty, or whatever – it’s a new experience. My winter is taking shape this way!