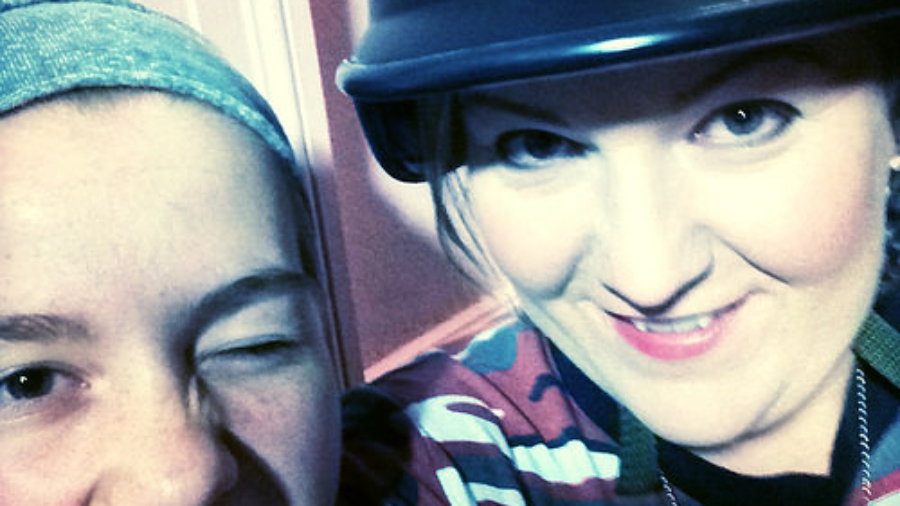 In a few hours I take the stage in opening night for a local production of Jesus Christ Superstar. It’s not a big deal, but it kind of is. For me.

I can’t remember when I decided I’d audition for the production –  a while ago. See, first of all I have loved this particular rock opera deeply for about twenty years. When I heard we were going to produce it, I felt this pang. It was something I would have loved to do. But I couldn’t do it, no way. Right?

I blame my husband’s influence – his role a year ago in The Rocky Horror Show. I remember he said his duty to himself was to audition. And then do what followed, whatever that was. I remember respecting him for his attitude. And I was so proud to watch him participate. I think I went to the show six times – as many times as I could, given our family schedule!

It’s all well and good to be proud of Ralph, but when it came to me – I almost lost my bottle. I hadn’t been on a stage since I was sixteen. I wasn’t “in” with the theater folk (because yes, we do have a scene, even here in little old Grays Harbor). I didn’t have any dance or vocal workshops or classes under my belt to help me out during auditions. Since I’m a woman, I am “too old” to get a lead (yeah. Theater is like that). I have no formal training in any way in acting or stage work. I was about a half hour late to auditions, and I got to sing some tricky vocal parts in front of people I didn’t know (at all) – almost all of whom had experience and were known to one another.

I was surprised – and honored – to get a callback and be asked to join the ensemble.

So my introduction to the world of Theater has been … well, amazing. The amount of time and work has been about what I thought it would  be (that is: grueling, when like me your presence is needed at home in the evenings). The egos and insecurities are also about what I expected. We’ve had some rows, some tensions – and ugliest of all, there has been gossip. When I hear the latter, I turn heel and walk off. So honestly, I’ve probably been spared a great deal of whatever unseemly bits there are to be had. And for this, I’m grateful.

I tried to think of myself as someone in service to the production. So: no complaining. No whinging. No asking annoying questions (this one was hard, because I had so many!). No second-guessing or picking on others. Show up – and do the job.

The world of costumes surprised me. I am a pretty detail-oriented tailor and the world of stage costumes is considerably less so – yet the pieces have to perform well, and be easily donned or torn apart or thrown back together. That said, I tried my best to be helpful. I found one dress for a lead in the costume room; I found a few other pieces for soldiers which the director put to use. I put together three of my own ensembles (including sewing my own hoodie, and making my own hair!). I put together Jesus’ second and final costume. And I made a lot of pom poms! Most fun: I got to craft a gold laurel leaf crown – out of real laurel leaves. The world of stage costumes, though new to me and not my forte (yet), has been fun.

And overall I am amazed at how much work it takes to put something together. Everybody – from my own 12-year old daughter running a tech aspect of the show, to the director, to the cast, and the musicians in the pit, and the prop stage workers, and those who clean the theater and take tickets – every single body involved is needed. People pour their heart out and at the end of the day – it’s all to please an audience. To make people laugh, or cry, or feel like singing. That’s what all that work is for. That is pretty fabulous. It really is.

So tonight I wash pieces of my costume (I have four major costume changes), scrub my face (the layers and layers of makeup required during dress rehearsal – pretty gross!), and finish making up opening night gifts for my castmates.

To say I’m glad I went for it, is an understatement. And the thing is … if I never would have went for it, I’d still be dithering around wondering if it was something I could do, or something way out of my league. I’d be sitting in the audience feeling a kind of cramped envy.

So yeah. I don’t have to go through any of that. I get to do it. Just do it! And I’m beyond grateful.