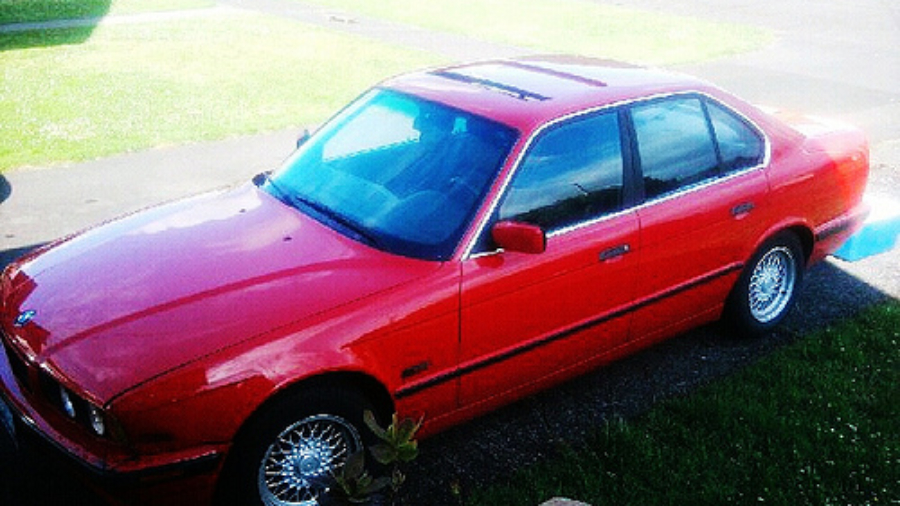 LOOK AT THIS CAR Have a look at this beautiful motherfucking car. It was last seen being awesome in my huge ass driveway which is where it is right now being awesome as usual.

(h/t because I am not funny, I just steal other people’s jokes).

Today was busy-busy-busy. I had to drive my new (used) car around town and not turn it off for a few errands because A. I had to make sure to get supplies for an event I’d committed to today, see below, and B. my new car was sold to me (deliberately) with a bad battery that had to have been sneakily kept-charged rather than the dealer just buying a new one (oh, expect a scathing online review. Actually, more a matter-of-fact one) and it was so bad I would need a jump at any juncture.

As of today I’d already YouTube’d up how to get to and examine the battery (it’s kept under the backseat! there’s a positive terminal in the engine for jumps though!), something I figured out that my husband hadn’t and the car parts dude hadn’t. The car parts dude (a big strapping fellow) wasn’t going to help me switch the battery out because of that seat thing, and when I told him it was either that or jump me, and by the way the seat was no big deal, two spring-loaded clips, I wasn’t strong enough but my husband had done it the night before – well then the dude jumps up and whips my battery out there and yanks on the seat and helps me switch out. Sudden wellspring of altruism or indomitable male ego? We’ll never know, but I drove off after a nicely-purring startup and a weight off my mind and a fair bit of cash spent. As well today I have jumper cables and the thorough knowledge of how to do jumps, since I had the pleasure of performing several the day before.

The stereo’s anti-theft code didn’t come with the car (and seriously? Retrieving one’s code is a PITA) so Ralph suggested upgraydding the stereo and I said Okay, knowing entirely the expense this might incur. Luck was with me as the shop I chose (the one my dad had frequented) had their little Euro antennae adaptor etc. and we had it all done this afternoon. The fellow who installed the stereo was named Roscoe and I found out he is a champion basil grower – I shit thee not (as in wins Grand Champion etc. at our County Fair). I had been querying him about car stereos and a few other things and sat practically on his lap watching, and he humored this (and the soft brass semi-stripped special-five-sided-hex-key-required bullshittery to remove the factory install), but when I asked him about the basil he brightened right up. We talked for a while and he ended up sending me home with four plants, including a lemon basil and very explicit instructions to get the best out of the plants – and how to start new ones via cutting (his preferred method). We had a Doll Picnic today at the Gallery as part of our Childhood Perceptions show (this was the abovementioned event I was required to bring food and drink and do some work at), including a professional dollmaker and many readings and a very large dressup game and food and drink – all orchestrated by our show’s co-curator Jeanne. The event included many of Barb Shillinger’s dolls and her expertise and willingness to talk to children about them. Phoenix chose an alter-ego for an hour (“Fern”): … while during cleanup I quite sensibly was waylaid by children wanting to climb in my trunk:

And then there was Robin Moore’s Charles Bukowski hand puppet that I thought was stellar: I was pulled and pushed all ways today but I got through the day and had some lovely, lovely moments. As you can see.

I can’t quite express how happy I am to no longer be forcibly car-free. It has made life easier. Maybe. I prayed a lot while our cars were out – prayed not for a car, but for acceptance, patience, humility. I am in a way more worried now because cars cost money, and we haven’t in the past had money set aside for car bullshittery, so it’s been hard. And perhaps most relevant to this story, everything I’ve done involving cars, I’ve had to learn shit the hard way. Seriously. And I’ve been a slow learner.

But today I can pray in gratitude, and give this new responsibility to God, and enjoy our good fortune.

And on that note:

“We’re all going to die, all of us, what a circus! That alone should make us love each other but it doesn’t. We are terrorized and flattened by trivialities, we are eaten up by nothing.” ~ Charles Bukowski 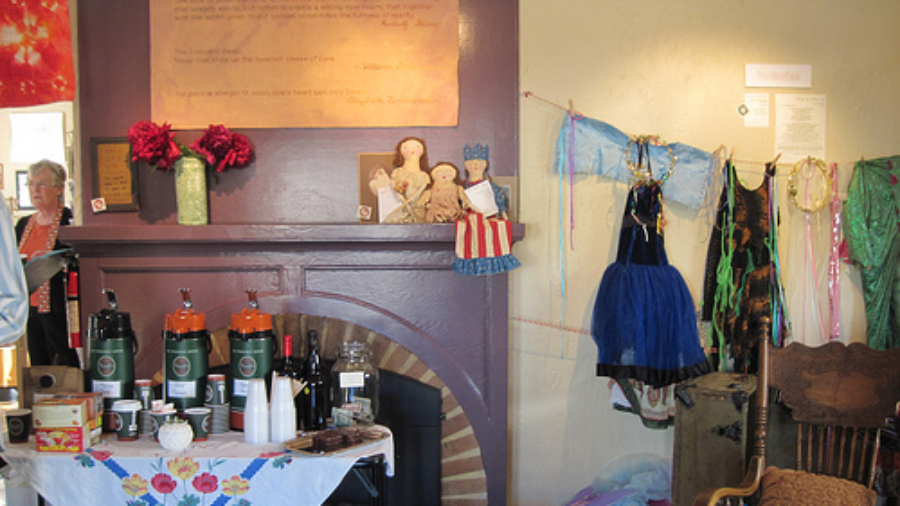 Some photos from last night. Guess what’s hard work, preparing pieces for entry into a show. Curating a show. Designing an exhibit. Collecting donations from the community (and keeping a ledger). Planning, shopping for, preparing, delivering, maintaining, and cleaning up after reception food. Talking to people and sounding relaxed and mellow even when one has been running full-tilt for most of a week.

Still. It all came off beautifully. Of course, I couldn’t take many pictures last night as I had to “mingle”, cook and deliver and manage food, and hide, with Amber, to grab a half a clove cigarette now and then. On the right you see part of our “fantasies” exhibit including a dressup and interactive hanging display. We’re encouraging grownups and kids alike to partake – this experience is augmented by a lovely poem by artist Lindy Parker that was read by a child on the audio tour. I made quiche. Delicious! An installation: Robin Moore’s “Dream Wrecker”, which I can’t wait to show you closeups of. Her interview was a hoot, too! Response to the show was quite positive! Including: Gallery kitty! Who ran in and out. She was tiny and sweet. The kids loved her, and one of the artists kindly donated her a catnip toy.

One (of three) of my interactive embroidery pieces. Ralph helps a young lad do some interactive embroidery (on my piece “Strictly Ivy League. Big deal.”). These pieces will be changing during the show according to those who want to participate. Fun! Barb Shillinger sets up one of her lovely handcrank machines as well as some projects for the young and old to work on. Sewing with a handcrank is a lot of fun! This particular machine is also a treadle, but for a few reasons we decided to do the handcrank conversion. Barb was a wonderful help.

Nels watches Gallery Kitty as she snoops her toy. Besides co-curators Jeanne and Ralph (who rocked), when it came to the reception a few parties came through in a big way including Tully’s Coffee and two local professional bakers – as well as my mom, who helped mule things from my little kitchen to the Gallery, and most especially my friend Amber. Unfortunately I haven’t rested since last Monday but soon I’ll be back to blogging.

As for the show, it is beautiful and I need to post more intimate detail shots of more of the pieces. We are putting together a photo and audio exhibit to post at the website, and soon. I’ll let you know.

If you’re a local, please do come to the show before it closes on July 3rd – and take the audio tour, which lasts about a half hour and is wonderful.