Today at the orthodontist my son got perfect marks for his brushing and flossing. I am definitely in that “sky is falling” headspace because when the staff called me back to talk to me about his braces (they’re being removed here in a couple months) I had all these thoughts of some new horror to face, but instead it was all good news.

So you should know I’m going to straight-up bitch and complain for a few paragraphs. You may not want to watch. I’m serious. Just a lot of complaining. Yarp.

So. Life is feeling cold and inhospitable. I’m tired of having an old, broken, dog hair-infused coat. And either wearing that or being cold. I’m sad AF that I’ve only managed to put $300 aside for Christmas. I had this whole excellent plan about a specific special thing to buy Ralph and instead we had to eat a bunch of the money I put by. I’m tired of not having a car, because the fella I paid a lot to fix my car fucked it up. And I’m tired of riding in my husband’s car that has no heater. My days mostly consist of moving small bits of cash here and there and borrowing different vehicles to do the things I need to do for my family. And some of those things are things that give me a great deal of anxiety.

I spoke to someone close to me recently and requested they not speak to my children a certain way. This person responded by un-friending me online and, now, giving me the silent treatment. I’m not angry, and I don’t regret making the request I did. But I am right on that verge of being angry. So then I’m worried I won’t forgive this person for not being there, while we’re going through the shit. My hurt is reasonable; my anger, is not. Did you know – I am more terrified of forming resentments than almost anything! Luckily I know it is in my power to not stand idly by. I have a choice in how I accept my life’s circumstances.

Some people are giving my family “privacy” while we go through the ish with sexual assault. This is kind of annoying. I wouldn’t write about it publicly if I didn’t want to share it. I am excruciatingly careful what and how much I share, for a variety of reasons. But it’s like – I’m putting myself out there precisely because I’m not going to pretend this shit doesn’t happen.

There are these “little” things that matter to me that I can’t shake. It bothers me my son orders the cheapest hamburger at the fast food place because he knows where we’re at. It hurts that I’ve been too distracted to be a good schooling mum for my daughter. I haven’t been able to pick up my shrine flowers and that is like… something I haven’t skipped since I started. I am willing to have hunger pangs and pick up those flowers. But it’s just: no, because I wouldn’t be the only one having hunger pangs if I picked them up. The fact I skipped the flowers, it weighs on me.

Life is really good and I know it is. I don’t want a rescue, either. I am not asking for someone to make me feel better. I am not longing for anything specific.

I just want that tiny bit of space to say, “Ouch.” I’ll bitch a little more, then I’ll stop.

As I read last night, “[I] no longer live in a completely hostile world.” I really don’t, and I know I don’t. The money stuff is beyond depressing, today anyway – but yet we keep getting fed, and I keep paying the bills. (Most of them.) Other people pay some bills, too. Last night a friend bought the Underbellie domain for the next year so I could keep writing there. Today we received a blog donation of $8 and – I am not kidding, $8 goes a long way so I am grateful! Donations can be hard, because it can fell like I’m supposed to “prove” I deserve it. I have to put that thought aside a time or two a day.

So: I’m struggling. The worst thing of all is, I look at my kids and I don’t feel the joy I used to. What we are going through as a family, it has taken a lot of my joy away – temporarily, yes, I know this. It’s a damn good thing I don’t live just for feeling good. Holy shit.

It’s hard on me to be the joyless Mama. Sometimes I think it’s my duty to be happy and to be loving. This isn’t a smart thought, it’s just something I can’t easily shake. When my joy is just robbed out of me I feel sad, and I think I’m letting people down. What I know is I have to sit down at my computer and admit a few things that don’t make me look all that great, but at least they’re honest. I can’t move through any of this if I don’t acknowledge it’s happening.

I lived many years not being honest, publicly or privately.

And, okay. I’m done complaining. Thank you for listening.

small stone #18
wet cat along the side of the highway;
second day we’ve seen her.
Driving past, my son & I both stiffen, the same thought:
we should bring her home. 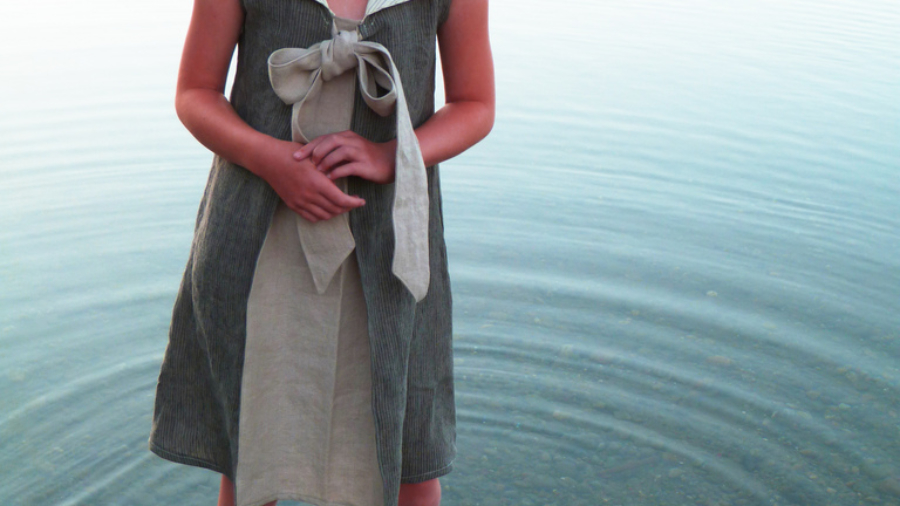 These last couple days I’ve had the pleasure of pattern-testing the Goodship Dress, by my friend Karen of Circus. The dress is a simple middy-style including a box pleat, in-seam pockets, and large bow-tie closure. Phoenix loves the dress. They say it is very “cool and breezy”, and they call it a “Pilgrim dress”. The armscye and collar bindings were simple but appealing. Nothing in particular was tricky about construction, although if I made the dress in linen again I’d likely cut everything on the bias. Better yet, I’d make it with a blend that had more drape. A coda: I had despaired of finishing this dress on vacation, since my 1967 New Home sewing machine started snapping its upper thread and Ralph and I could not figure out how to fix it. In Shelton today I stopped into the Sew Now Studio in dowtown Shelton. What a wonderful shop – it had actual supplies one needs to make garments – tons of wonderful zippers, sturdy ribbing, bottomweights, lining, knits, woolens, all purpose threads in every color, buttons. Wonderful stuff. Imagine that! Yes, I am envious of the Shelton locals. Anyway, I picked up fabric, lining, interfacing and buttons for a coat for Nels – and even more fabulously, rented a Kenmore sewing machine so I could finish my work here at the cabin!