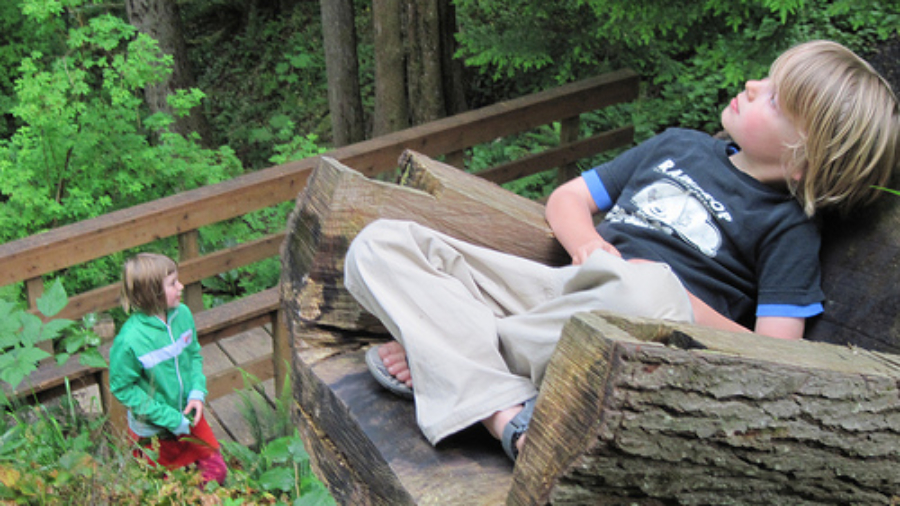 There is no doubt in my mind not one other person besides Ralph or I will watch a twelve minute video of my family running about in Elton Bennett Park in Hoquiam last evening; however I will in fact watch it, because it’s awesome, and I’m glad we have it on record because I love watching the many older videos Ralph has made. Such wonderful snapshots in our family’s life together.

(Music by my husband’s FAWM-friend Joel Canfield and used with permission.)

Ah, the famed “Cemetery Trails” as we called them back in the day, mostly we ran around and got up to harmless fun, maybe once I smoked some pot with Shane so-and-so (HQX ladies, you know who I’m talking about) and I can’t remember the other guy (Justin… something, don’t remember his last name but he Smoked A Lot of Pot). That’s about it. The trails seemed so long and winding and wild to me – even as a high schooler! – and I imagine the kids experience them in this way. Our storm in 2007 took down some trees and whomever used to maintain the park, well it is not being maintained as well now (HQX parks seem rather neglected except the one right in downtown which is always tidy-looking but is not a real “park” rather a cannon-display Veteran-honoring courtyard). It’s still a lovely place to visit (as is the cemetery proper, just a bit further up the hill), made all the more worthwhile by the rather strenuous ride up the hill to get to it.

Some notes – first, the kids crossed about every single huge fallen tree (over gorges full of devils club) there and back again, usually running, and although I let them do this I always worry they may fall (and they never have). Second, the last third of the film Nels is obsessing about getting some kind of caterpillar-odor off his hands. He is a smell-freak (just like his mother) and mostly yelled about this for our bike ride home.

Also, let me ask, do I have a huge, booming boyish/mannish voice or is it the “sexy Kathleen Turner voice” an ex-boyfriend once described it as? No wait, don’t answer. [fingers in ears]: *la la la la la la*