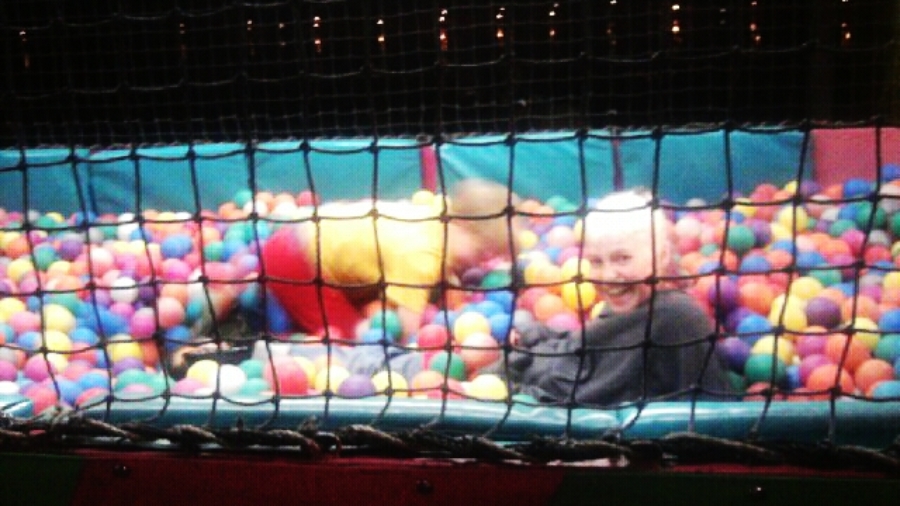 So I got stuck in Olympia with the kids at a late hour. Don’t ask me to tell you why or how, it’s a dull and yet painful story. I thought we’d have to stay (overnight or at least a long long time) and I was kind of panicked. I called people we knew in Oly but couldn’t get a ride. I kind of agonized and wondered around and bought things at Target and got the kids food while I went totally Flyhead about my predicament and couldn’t think straight. Let me tell you, those who know me probably perceive me as level-headed in person most the time, even when things are intense or when people around me are falling apart, but when it’s down to just me and the kids are involved in some way that seems unsafe or weird there can become a point where I get Crazy-Eye and my brain stutters and shudders. I’m surprised I wasn’t arrested on suspicion of shoplifting, I mean I was twitchy as hell checking out (with, I’ll point out, a credit card I wasn’t entirely sure would go through). Kids and I ended up boarding the last bus downtown because, where Target is, there’s nothing there you’d want to spend time with.

Lakefair downtown, things were a bit intense. The bus flew down the hill and I perceived the wondrous lights of a large carnival (large by my bumpkin standards anyway) so I knew where to take the three of us, for the Now anyway. I had only a few dollars cash – otherwise I would have dropped my rent money on two bracelets so they could go on every ride they qualified for. As it was they still had fun; watching a breakdance group and running about while I phoned some more. I sat by the lakeside vicariously enjoying their fierce little lives.

After finally getting ahold of Ralph and arranging a meetup I had enough cash for one carnival “ride” for the kids. Understand this was like, seven dollars I think, for the kids to go in this kiddo funhouse (their choice). The local who’d been hired on was amiable enough to conversation, or was rather a captive audience, to be more accurate. Turns out he’s a musician and living like a sardine can in a rental with others, trying to get by, thinking about going to school, not sure what he’ll do next week for employment. We talked music for some time and my feelers went up, as Ralph is still trying to get connected with Oly musicians and the fellow sounded talented or at least versed in many interesting instruments.

The kids played and played (bless this young man for not being a dick) but soon it was time to go. I sat my bundles of Target Fuckery and a McDonalds bag and my purse and whatever in the grass, and took out my card and wrote down my husband’s name and circled a number and wrote “Music / Helsing” (the latter re: the K Records festival each year). By this time two huffy carnival pros – that is, the fellows who travel with the outfit, not spareboard – were all over the young fellow and hustling him to close up. One of them was yelling into a walkie talkie, “I have some real important stuff going on,” and then proceeded to shout-command the young man in a brusque and not-entirely-thorough way. And shit, I get it, these people work hard, I’ve worked in that kind of scene, so I just slipped the card into the young man’s pocket (unobtrusively enough, or so I thought) and said, “Good luck,” (meaning, with everything) and then –

the guy who’d been yelling into the walkie talkie jerked his head at me and said, “Jesus,” with all the disgust you can manage mustered in a voice. I seriously wish you could have heard it. You’d think I’d taken a shit on the green. I am not sure what he meant but, I haven’t been addressed with that much vitriol and hate for quite some time. It was pretty busy and I had no immediate response to being perceived as A Piece Of Shit For Reasons Mysterious so I merely bundled up the kids and the bags and gently floated across the grass, trailing the final partiers fleeing off to bars (Oly was rowdy tonight, for reals).

Our rendezvous was with Ralph was scheduled for Sizizis (which, I found out, is closing down Sunday – boo!). Walking up 4th it was so many people and shouting and cutting eyes and the smell of booze and cigarettes and weed and all kinds of amorous behavior and fights and weird energy. And yes. A few people who returned my smile. The kids were great, of course, because they are tiger cubs running on sidewalks. We got to our coffee shop eventually (it really was a nice night for a walk). While I waited in line for my drink the kids got something cold from the cooler, grabbed a table, and set up chess. I stared a bit and wondered where they’d learned to play. I was feeling more collected, or so I thought. So I’m standing there and an amiable large man turns around and says to me, “Hey, do you remember the name of the boat from Moby Dick?” and I respond, “Uh, the Minnow… the S.S. Minnow.” then to my horror I realize my mistake and shout, “No! The Pequod!”

At about 11:40 PM Ralph rescued me and I gave him the americano I’d purchased him and I got my ass out of Dodge. –

but, the kids had a glorious time.