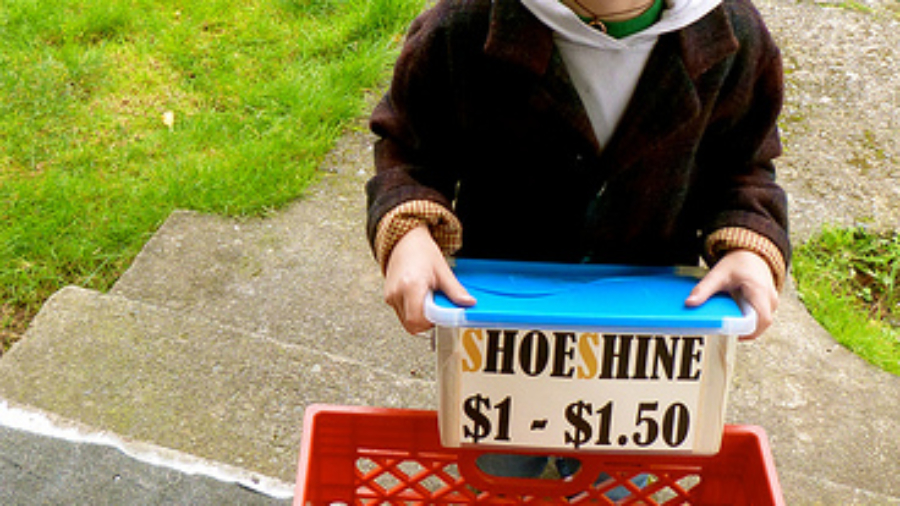 Some people are thinking it’s cute that Nels is somehow and suddenly really into shoe shining. I mean like really into it. I mean like, a hundred-thousand-percent into it.

As in: he polished my Docs four times in as many hours. As in: before I was up this morning, he’d made a sandwich and begun plying his trade out on the curb. As in: he got a pair of his muddy and battered old Romeos, which I was on the verge of throwing out, to gleam like an ethereal elvish lake or something.

As in: you don’t want to make eye contact or he brightly asks, “Wouldya like a shine?”

Not since Kibbleland. I’m serious.

At the same time, given my daughter’s recent self-imposed exodus to all-day school, I am aware these wonderful, timeless days with my son will one day come to an end. I’m not saying my daughter is going to stay in school the whole year, or my son is going to start any time soon – just that with Phoenix’s new schedule I’m painfully aware of the fact that hey, kids move on sooner or later. I’m fortunate to have so very much awesome time with each of my kids in a home setting, and don’t think I don’t know it. Today even though I was at times aggravated at Nels’ laser-like shoeshining focus, I also felt so glad for his interest and passion which is boundless. And I’m very grateful we get to do fun stuff like this every day.

I also sent him down to the hardware store, figuring he might get some clientele down there. Oh but get this – first he walked, on his own, to the bank, and withdrew ten of his own dollars in various kinds of change. He was only at the hardware store forty minutes and he made ten dollars – most of it, donations by smiling older guys who weren’t wearing black or brown leather shoes.

Nels was impressed with how successful the venture was. But I admonished him:

“You need to do a good job, though. Because one day people won’t pay you just for being cute, or whatever. No one’s just going to give you money like that when you’re like, twelve.”

Nels smirks. “I’m nine,” he responds. I can see him doing the mental math. 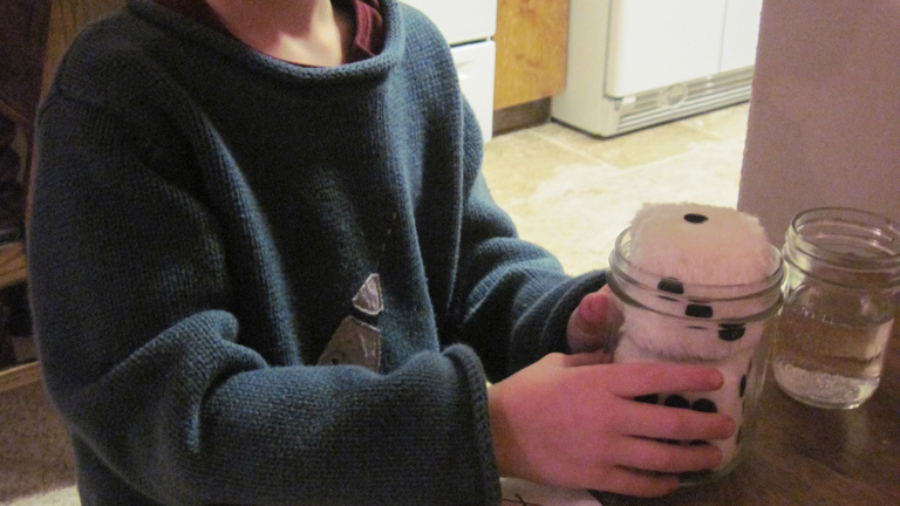 Let me set you straight on something.  I did not like the sappy film All Dogs Go To Heaven, boring enough Bluth kiddie-fare with a creepy and sad child-star-murdered angle to boot.  So you can imagine how much less I like the television series, with its second-rate animation, insulting gender roles, and flaccid let’s-get-along-together episodic morality plays (think: an Afterschool Special with less brains).

Other, smaller, members of the family feel differently.  Both children watch the show on Netflix now and then, but my son Nels in particular is – shall we say, obsessed.  It isn’t so much that he clamors to watch the show constantly –  he doesn’t, often having other things that occupy his mind and consume his efforts.  But watch the show he will, episode after episode if we let him, his eyes shining and his face in an angelic, blissed-out smile. The show is pure gold in the mind of my youngest child.

There is a small sub-genre of obsession in my son’s fascination with this cartoon.  A few weeks ago as he and I drifted off to sleep I was telling him a story about the lovely morning we’d have the next day.  His body grew limp and his breath regular as I told him I’d get up, and make coffee, and turn the heat up, and bake biscuits, and when he awoke I’d get out a board game and we’d play on the floor together, and snuggle…

Then something changed.  Under the covers next to me his little body went rigid and he launched into a treatise on Kibbleland.  It was a board game of sorts – hence the reminder I had unwittingly unleashed.  The game heralded from this doggie cartoon and involved some kind of supernatural whirlpool.  It clearly terrified and fascinated my son all at once.  And even though only seconds before he’d been nodding off to Sleeptown, Population Nels, instead I was treated to fervent, intense whispers for the better part of an hour. As I myself struggled to stay awake and calm my little bedmate lay still enough but rigid and electric, his low, harsh whispers saturated in wonder and fanaticism.

My son’s obsession with Kibbleland cannot be overstated, as evidenced best by the fact he made his own game board full of beautiful nonsensical labels and odd little idiosyncrasies including a winding “short cut” a great deal longer than the standard path to the finish.  He manufactured dice from paper and, finally tonight, succeeded in convincing Ralph to travel to no fewer than five stores to find “real” dice – a fuzzy, 3″ cubic pair from Hoquiam’s own Swansons.  His game pieces are beer caps (!) and the paper dice, now rendered defunct by the manifestation of real ones, are now “coupons” and have somehow been integrated into the game in a way mysterious to me – as is pretty much everything about Kibbleland.

And perhaps the most breathtaking feature  of all is the Great White Shark-esque behavior my five year old will employ, circling and waiting and if at any point you deem yourself bored, or not sure of what to do, or in any way seem like you might have a spare moment.  “You want to play Kibbleland?” he will ask, his body tense, his voice bright, his eyes dark and bright and predatory.

Tonight he succeeded in having both dinner guests play the game for a solid twenty minutes.  When Nels would disappear into his room to gather another game piece these two men would whisper questions to my husband and I, desperate to have an advantage or even an inkling as to game strategy.  My son, flying into the kitchen for a glass to shove the fuzzy dice into for rolling (ala Yahtzee), had a look of ethereal satisfaction to have thus engaged our adult friends.  Finally – finally! – he was succeeding in sharing the Gospel of Awesome that is Kibbletown. Labeled plots on my son’s “Kibbleland” board: