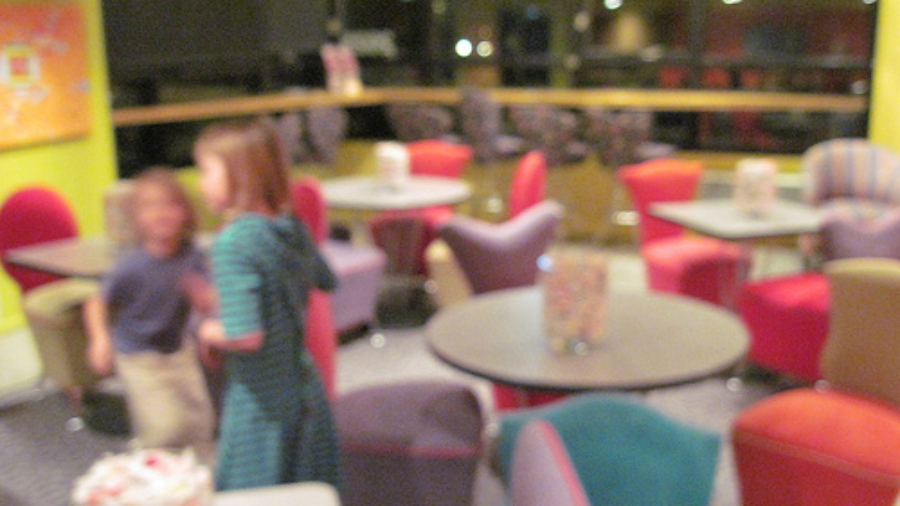 Portland: a beautiful and exhausting trip.  It rained all the way down but let up to a bright coldness as soon as we got there.

The Inn at Northup Station was really fabulous. The kids loved it times One Million – the oldies, the roof garden, the very, very BRIGHT colors, the king-size bed and kitchen (the kids tiptoed on stools to get at drinking classes) – the whole bit.  A great rate too – they don’t charge extra for your kiddos and our suite came with a kitchen! Plus, GIANT JARS OF TOFFEE on each table in the lobby! After checking in we ran to the next door suite to check in with Karen and her daughter Ella – both of whom had had been working themselves silly with partner Shelly – then we settled into our room, unpacked a couple things, and ran down to SE to pick up my brother and get a late dinner. Billy suggested Imbibe and it was a wonderful choice. Everyone was hungry, but Billy and I ate and ate and ate. I had a delicious dinner (including seared ahi and a garlicky caesar salad and a burger, hell yes) and a decidedly sub-par bloody mary. I even shared the ahi with Billy and let him have one more piece than me. I didn’t say so right away. At first he ate the garnishy stuff and avoided the last piece, like a gentleman. Then I said he could have it, in my best gentleman-voice. Then he pretended not to know that he was getting one more slice than me, at which point his love of the deliciousness won out over our mutual silent shows of gentility, and it disappeared into his wolfish mystery-beard.

So seriously though I could have eaten about five plates of that ahi.

Back at the hotel I spent the rest of the night working alongside Karen – nothing like a sewing marathon until 4 AM! – then crawled into two beers and fell into bed and had a really rough sleep.

In the morning our kids woke themselves up while Ralph and I packed our few things. This even though they’d stayed up as late as I had!

Nels, model: “I’m pretty sure there’s a lot more to life than being really, really, ridiculously good looking.” Like bananas and brownies in bed, for breakfast: Despite having little sleep and having to leave the much-cherished suite, both kids cheerfully had their breakfast, brushed teeth, got dressed and in all ways re-joined in the adventure.

Nels wasn’t feeling quite right: sadly, he was constipated (an issue we haven’t run across since the very occasional incident in his infancy). He wasn’t in pain but he was apprehensive about the, um, work that was ahead for him. I was very tender to him and, after finding the shooting locale and while we waited for his photoshoot, he lay on the couch with his head in my lap and I stroked him. But when it was Go Time he did his thing like a champ. He had the photographer, her assistant, and a couple moms laughing very hard (I watched some of the shoot, but not all). A lively little spirit.

I can’t post pictures of any of the snaps I took at the Patterns by Figgys photoshoot but I can tell you it took place in the lovely Z-haus in the home of the designer. There were about eight or nine kids running about up and down the stairs and playing outside. It really was a lovely time and even the length of the photoshoot didn’t seem to get the little ones down. Nels’ constipation also resolved (he came out of the bathroom and said, “My condensation’s gone!”) which made him happy as a lark. And truly, I felt relieved as well.

Afterwards our plan (as authored by the kids) was to find a to find a kaiten-zushi restaurant: but after locating Sushi Ichiban and parking we walked around the block to find it closed – from 2:30 to 5 PM (dammit)! We used the opportunity to stop at VooDoo Doughnuts and peruse their fun creations (if you’re into that sort of thing, and yeah I got the maple bar with bacon on top) and a cup of coffee. Then a quick call to my brother (because no, we don’t have a smartphone) to get directions back to the sushi train; we walked two blocks to Sushiland. Then to the park to play very rough with daddy. Portland was a bit sad. Very white (I’ve got nothing against white people, some of my best friends are white), not a lot of eye contact on the street, no children in the park. It was also rattling to be in the bosom of wealth one minute and then amidst many trolleys loaded with the few posessions of those sleeping rough. Ralph gave some cash but of course the number of people made it seem almost futile. Funnily every person we spoke with directly was quite friendly; and although I’d heard rumors of notoriously poor restaurant service I did not find this to be true at all and in fact everyone we came into contact with seemed to like their job.

We hit the road at about 4:30 and came home – Hoquiam never looked so good. I am not suited to undersleeping or rather, after not getting sleep I function best in my own home.

I wish I could express how delightful it is to be with my kids and how impressed I was with their conduct. Ralph and I give them everything we can give them – including their personal freedom and agency – and challenges like these last twenty four hours prove the concept. The truth it is was a long photoshoot today and Nels was both ill-slept and suffering from “condensation”, the latter of which had been causing him anxiety for the past twenty four hours – yet he still did great.

Another test of character: in the Z-Haus Phoenix was given the opportunity to entertain herself while waiting through the shoot. Whilst doing so she also played with the other kids including Karen’s little Ella. Karen so appreciated this – as she had lots of work this morning – that she gave Phoenix a thank you and a cash gift (and the two hugged one another sweet as you please). At our sushi date later Phoenix very adult-like requested to buy the family’s dinner; at $16 plus tip she was able to do so in entirety. A beautiful girl, inside and out.

It was also wonderful for the kids and I to see bits and pieces of the city, a rare pleasure for us (I can’t speak for Ralph, who is a bit more of a homebody). It would be lovely to travel somewhere and stay a bit longer sometime; maybe some day we will find the means to do so.