One of the best things about our new neighborhood is when the sun comes out the kids do too.  Thusly as I cook today (eggplant parmesan, butter noodles, sauteed spinach with pine nuts, homemade graham crackers, roasted roma tomatoes) there’s a little pack running about outside and climbing trees and yelling at one another (sometimes quite savagely) and biking and scooter-ing and taking trips down to the corner store.  My kids are pretty cool in that they mostly play outside in the fray but periodically come inside if they need water, want money, or require some TLC, a bandage, moral support, food, or something new to do (Sophie’s pets and her expertise in handling them – four chicks and a leopard gecko – gain her extra popularity).  The neighborhood kids seem to like our house well enough because, I think, there’s often cooking in process, it’s tidy, there are many pets, and there’s no television blaring.  A couple weeks ago when I made cookies for the group of neighborhood boys who were engaging in various ass-hattery, the fellows tromped in the house – carrying toy guns, which these few never seemed to want to put aside – and gaped at our spare household.  “This is a really nice house!” one of them finally blurts out, clearly impressed in some way.

Today my children realized some neighborhood child had the same walkie-talkie set.  They discovered this – to their everlasting joy – by hearing the voice of the child(ren) first, then trying to suss out who was speaking and where their new friend lived.  This adventure turned into many others as the sun soared above our cold little bright block.

Nels has a new scooter, a birthday gift from my mother.  I watch this afternoon as he enthusiastically makes a run up and down the block.  Then he throws the thing aside into the grass strip along the road and whips out the aforementioned communication device.  “HELLO?!” he yells into the handset, delighted to be called by one of his fellow agents.  I used to worry a bit about cars or assholian neighbors or the lack of things for the children to do outside, but this neighborhood has been the most active and affable that we’ve so far known.

Things do occasionally go south in the little gang.  Ralph peeks outside to locate the spare child we’ve been entertaining today (as her mother and father spend time at home with their newborn twins); it is almost time for him to go home.  The kids are in a group at the end of the block, having made a fortress of my mom’s old truck in the driveway and affixing it with a hand-lettered sign: “Everybody Allowed Except P.*”.  When my husband is ready to bike down to the store to pick up some groceries (parchment paper for aforementioned graham crackers) I suggest he ask P. along for the trip – a boy who is often the target of group exclusion.  But P. has already found a niche in the group again and is uninterested in leaving.  It’s hard to keep up with the social alliances that shift, ebb, and wane.

By the way, and off the subject of the kids for a moment.  This is the kind of motherfucking shit I have to deal with:

The composed creature in close-up is Silver, who seems to be a natural leader of the flock.  She is also a Silver Sebright and for some reason (her enviable plumage?) she cost 75 cents more than the other three (a pair of Americaunas named Fury and Felix Jr., and Light Brahma named Johann).  The cats show no sign of wanting to tamper with the chicks but do enjoy sleeping next to the chicks’ little habitat (likely because it’s very warm).  Lots of little lives clustered in the Hogaboom homestead.  If we ever have a fire we’ll be making a lot of trips into and out of the house.

* The name of a neighborhood child. 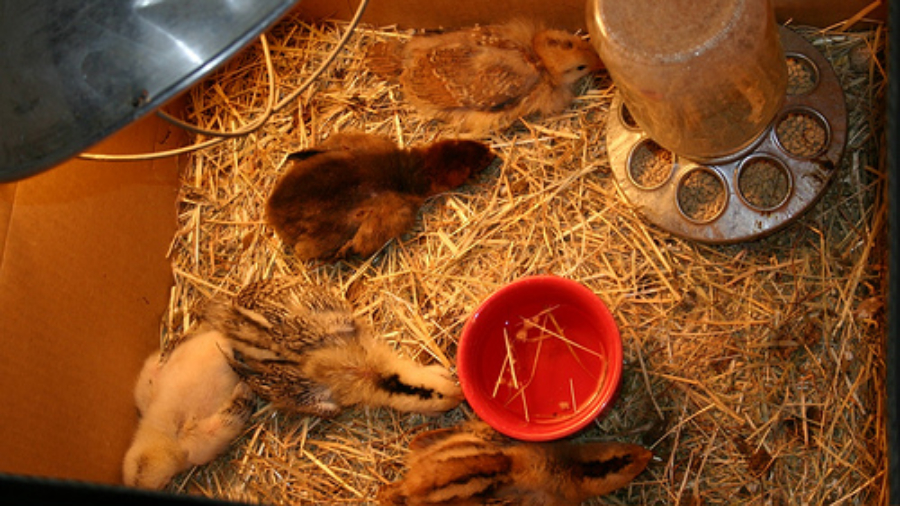 These chicks party all night then suddenly sleep at the same time. I tried to sneak up on them and snap a picture – but they’re light sleepers. So I inched forward imperceptibly for several minutes. One would lift it’s head up and cock an eye and I’d halt. Then it’s eye would get sleepy and it would slowly, slowly lower it’s beak to the straw. Unfortunately the digital camera we borrowed makes a tiny sound right before it clicks the shot – thus some of them are stirring in this picture. I wish I had a picture of them beaks-out. It’s just ridiculous.

As evidenced by Ralph’s initial criminal lineup, we’ve had these little guys (and gals) for just over a week and they’ve grown enormously! In an act Ralph compared to N. Korea’s nuclear testing bravado, this morning one of them flew up to the edge of the box and perched there momentarily.