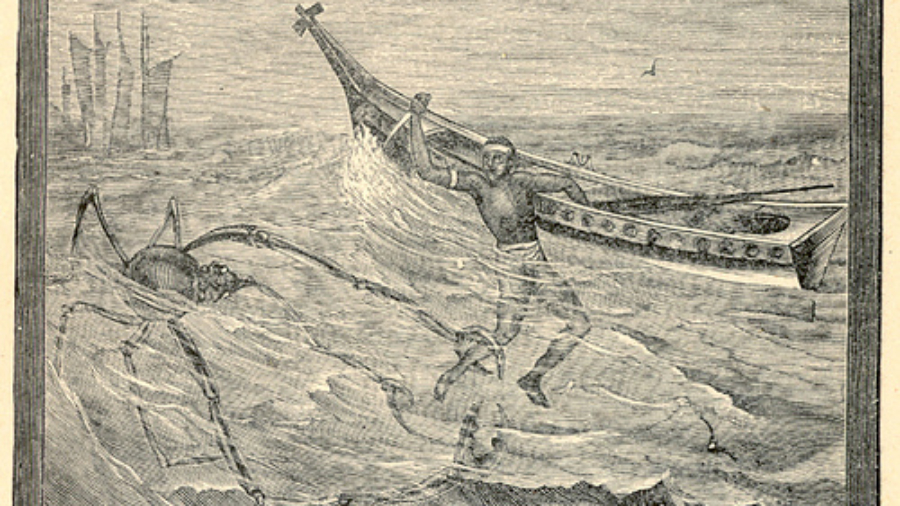 The definitive response, or at least an incredibly good one, to the TIME magazine assery.

What the world eats, a week’s worth of groceries. h/t Jen G. who reminded me of this article.

From the archives: “Craft pr0n and how it’s killing America” at Underbellie. This two-year old post was recently brought to my attention as a few of my tweeps were diggin’ on it. By the way, only a few months ago I finally found the “affordable and well-made, probably used” dining room table I write about here.

Sea and Land by J. W. Buel, 1889. Do you even know how much this is my thing? Or how much I want this book, and to embroider plates from it? A LOT. My favorite was probably the Japanese spider crab, which turns out has recently been fascinating my brother as well. Oh, and it’s very real. And yes. I laughed so hard I cried.

Ashely Judd on her “puffy” face, at The Daily Beast. (Did I post this already? I don’t think so. Anyway. Here it is. She rocks!)

SCIENCE figures out what really causes ice cream headaches. In the comments, admit it if you’ve had one in the last half year even though you’re a grownup.

Literally the Best Thing Ever: Fictional Rich People of the 1980s at RookieMag.

Hey, I missed James Brown’s birthday! Here, have some dancing lessons. Just be careful on what life lessons you take from the man.

Girls Gone Wild: Female Sex Addiction and the Internet at The Fix.
Readers looking for titillation will instead find a thoughtful piece written by a sex addict (yes, that’s a real thing). I’m not a huge fan of The Fix being as its for-profit motives mean well, what you might think. But this was a good article.

“The greater your shame, the more you do the thing that gives you shame. You feel bad about yourself, you’re lonely, you feel low self-worth, you don’t have enough endorphins to make yourself feel good, so you go back to the addiction because it pleases you and punishes you at the same time.”

“I’m not ashamed to dress ‘like a woman’ because I don’t think it’s shameful to be a woman.” – Iggy Pop

“Talking About Independent Learning” at Natural Life Magazine: a schooled and non-schooled young adult discuss the differences in their learning environments. What a beautiful interview. “Maybe self confidence is something that doesn’t need to be built as much as it needs to be protected.” I’d say the same for critical/”free” thinking, compassion, and work ethic… you know, those things people are often saying need to be drilled into kids.

“I’m sorry the information is so scanty but I’ll send you up more as I get it. Blake out.” First, he is acting the hell out of this cut-rate scene in a Z-grade film. Second, his looks and mannerisms are uncannily that of my brother! Third – SCANTY. The information is SO SCANTY.

Speaking of my brother! A picture of him from 2005. Adorable.

I set up my next blood donation appointment online (here in Hoquiam/Aberdeen there’s one at Walmart on August 11th). All types are needed. Red Cross has been assclowny in a few ways in the past, but their online setup is pretty good.

“Amy Winehouse: Death and Addiction” by Kendra Sebelius (who is also @VoiceinRecovery on Twitter and writes on eating disorders; she does great work).

“Addiction is a serious issue, one that requires serious discussions. I feel people still have the tone of â€œwell, she had a choice to stop.â€ Choice is such a hard word to even address in this whole thing. […] Rehab didnâ€™t keep me sober, any more than it does for many people. […] This doesnâ€™t mean a person is bad or a failure or unwilling to get better. It means it is hard to not only get sober, but to stay sober. I had to change my environment, ask for help, and find a new way of doing things. Rehab is just a starting point. You donâ€™t go to rehab and automatically get better.”

Further on Winehouse: apparently a HuffPo article was needed because so many don’t understand alcohol withdrawal. This is kind of rattling to me.

Common rumors about lesbians I would like to dispel

The Just-So Stories complete text poster. Pretty fabulous. I’ve acquired this book and a few other Kipling tomes for my kids; they love them.

From M’s blog: “Mistakes”; a wonderful post about a child’s ever-broadening assessment of the world around him.

And – guess what? Babies thrive on real meat! From vintage-ads on Livejournal:

Babies, on behalf of parents everywhere, I’m really sorry if anyone offered this to you.