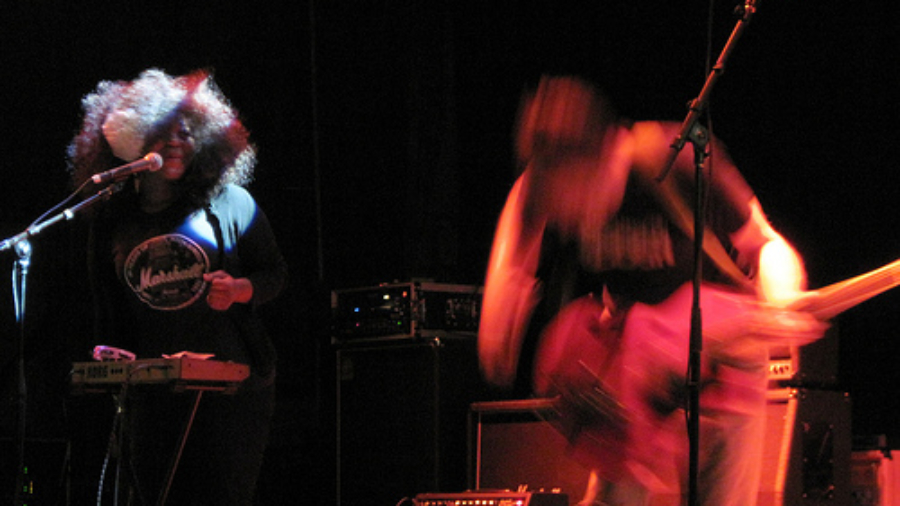 Only a fraction of the people who said they’d turn out to his band’s performance tonight actually did. But that’s okay because I know people are busy and also, sadly some people seriously do not know the level of Fucking Awesome that Ralph and Flo bring.  The band got hosed via their scheduled slot (first band on Thursday night; obviously the later positions, especially Friday’s, are better for audience participation), but even given that I would not say they had the potential to be crowd favorites (although they certainly garnered lusty cheers from the smallish audience assembled).  I honestly think Aberdeen and Hoquiam are still more interested in the grunge snorefest of rather unoriginal, plodding guitar-lick laden stuff.

Don’t get me wrong, I like a lot of grunge.  Some of my best friends are… um, grunge?  No seriously. I can belt out the Pearl Jam like no one’s business.  Just ask all those poor victims at the Paylor’s summer barbecue event last year.

And I’m not saying the other bands that played were snore-inducing. Shit. I’m just talking myself into a corner here. What I am saying: Ralph’s group is hard-pressed to find their screaming fanbase in this locale. Good enough? This was the second show with Flo and she and Ralph were amazing together. They used “hired gun” Geoff on drums (an old friend of Ralph’s; they were in a previous effort together). The three of them brought it.

The kids and I sat with a small group of vocal and awesome friends who cheered the group on with much gusto. I couldn’t stop aggressively tapping my foot and singing. I don’t know where we’re going to get the scratch to record another album but I know it must happen as it’s too good not to.

Sophie wore her new nightgown as she loved it very much. She wasn’t sure of the propriety of doing so; she worried she’d get it messy (I told her I would happily wash it – and she didn’t muss it anyway as it turned out) or that people would make fun of her (I validated this concern; she also knows what I think of such potential opinions). Gee, I am sensing a need to further help her deprogram from some absurd social concepts. She was a doll at the show, helping look after her younger friend E. and supporting her father as a loving daughter does.

Nels of course was dying to be involved stage-wise (Ralph schedules all-ages shows whenever possible so The Boy can stage-dance). He’s so suave he totally got past a “SECURITY” fellow standing at the stage curtain; a few minutes later when I went in to retrieve The Boy the same “SECURITY” fellow stopped me and wouldn’t let me pass. I gave it up, figuring it was his ass when my son Phantom of the Opera’d down from some rigging. Ralph, Sophie, and neighbor-kid/friend Little P. stuck around a bit longer to support some of the other bands; Ralph came home early enough to deliver Little P. home to his family (school night and all). Tonight was their last show as Redbird Fever, as the band has changed membership since that moniker was agreed upon. Their future shows and recordings will be as LiiGHTS.

Ten to eight years ago when my husband was fronting his most earnest and ambitious music project yet I prided myself on attending every concert they had. Come hell or high water, long hours at my job, a broken-down car (I think I availed myself of a one hour cab ride once) I made sure to be there (I remember a particularly grueling trip driving to Spokane, playing a show – unpaid – and driving back, in one day. Wait, there’s more: we had five of us in my little Mazda truck, including all the band gear. And none of the guys brought money for food – I paid. I think we went to the Outback Steakhouse somewhere in Desert Hell Fuck Hole, WA. When we got back at 4 AM or whatever Ralph helped his guitar player do his paper route, because the guy was wrecked. This is all 100% true and indicative of aspects of rock-band life). It was aggravating sometimes to support some of the types of shows and venues that went down. But I loved every minute of his performance. I loved his music, and I remain so impressed and inspired that he can write – and perform – the way he does. For me, this is something as close to magic as I can credit – creating something out of thin air, making people dance or cry.

I wanted to be there every time he played, for his sake and my own.

Things have changed since then, and tonight I’m reminded of the largest difference: our two children. Although a wonderful local friend here in Port Townsend found a childcare option for our kiddos (who we take to shows unless, like in this case, it’s 21 and over), it was so obvious to me tonight watching the children cavort with their babyhood friends at a grange dance that my daughter – who a few days ago was at the southern terminal end of the Western United States coastline – would not best benefit from a hang-out with a handful of kids and a movie night while her brother fought with her over popcorn and occasionally tried to murder her. She needed me or her father, full stop; and since her father was going to be up on stage reaping the acclaim (and possible airborne panty missiles, yet I kid) of his fans, it was going to be me.

And I was right. After we drop the bandmates off uptown Sophie, sad and forlorn like a wilted nightflower in her ivory and black silk dress, suffers through renting a movie and heading back to the hostel and my preparations cleaning out the car, stripping her and getting the bath and night clothes ready. By the time I’ve gone to the upstairs kitchen, fixed her a bowl of fragrant oatmeal, and brought down a few books to read she is curled up asleep in the corner cot of the six-bed room. Waving the bowl of hot cereal under her nose and she revives, her eyes sleepy and red. She is ravenously hungry and eats, then reads the books I brought her. She is bone-tired, but centered – even smiling, and I know I made the necessary choice.

Now, sitting in a dormitory while she showers, typing my handful of words (this month’s novel effort will have to wait), I miss my friends at the show, and I’m sad I couldn’t be there for my husband. But I do know he knows I’m inspired by him; and as for our many and awesome friends I hope they all know how much it means to our family to have them show up – because sometimes even the most die-hard fan can’t be there.

“Charlie’s is the best fucking bar, man! You can get so much titty action there!  Well, Levi can.  I don’t got game.”

I overhear this, walking in front of a small pack of boisterous men and headed up 4th Avenue in Olympia, looking for a 24-hour coffee bar I know is up here somewhere.  I’m also looking for my girlfriend and trip-mate Jasmine who was not allowed into my husband’s rock concert on account of misplaced identification (sad times!).

“She’s got more game than me,” the breast-aficionado indicates yours truly. Ladies know this ritual well: a male stranger, bringing you into a conversation on an awkward or slim segue.  It’s usually harmless; it’s usually friendly.  I return communication in that spirit, because I do not assume guys are unilateral creeps, or that they don’t have the right to talk to me.  He compliments my fishnets.  I tell him they can be his for $1 at Wal-mart.  He tells me I wear them better than he could.  I ask if he knows where the coffee bar is.  He walks me to it and manages to shoehorn in several colorful Olympia facts as well as saying there’s “nothing to fucking do around here.”  “I take it you live here,” I say, and after his assent I tell him: “I’m from little old Hoquiam, and I like visiting a lot.”

If I’m out during nightlife, I get hit on, yeah. I think I get hit on because I am a content and happy city-goer.  I like talking to strangers.  More than that, I love going to music (especially Ralph’s), and I love eating food in the city, and I love the summer night and what it’s doing to my mood, and I love that I took Jasmine out to lunch and the spa and we had a wonderful time – even if her plans to watch a show were derailed.  I am ecstatically happy for a free night while my kids are out with other grownups – my daughter with my mother, my son home having pizza and recording music with a friend of Ralph’s.  I am happy, but also the world seems spinning so fast it might throw me off entirely, at least where my children and my paths have momentarily diverged.

Redbird Fever‘s set was a good one; I was touched by the friends who came, many from a 1 or 2 hour drive away, and the unexpected and pleasant surprise of Ralph’s old bandmate I hadn’t seen in nine or so years.