I have decided a huge amount of conventional wisdom about teenagers is utter bollocks, as they say. Teenagers are not ridiculous or less-than; they do not deserve our smart-aleck comments and eye rolls. They do not warrant our smug and authoritarian parenting. My teens are not rude, entitled, “crazy”, “hormonal”, non-sensical. They are not especially loud or dirty. They are exactly as I would have predicted from my incredibly extensive and intensive experience unschooling them through childhood: they are whip-smart, kind, funny, sensitive, and joyful. They are genuinely interested in other people, not just themselves. They are interested in the whole of life, not just work. They do not have the martyred energy, the passive aggressive forms of communication, the entitled and inflexible attitudes of adults. They respond to criticism or correction with open-mindedness and they change their behaviors if their behaviors are deemed problematic.

If the citizens of this country were anything like my teenagers, the world would be a much better place. 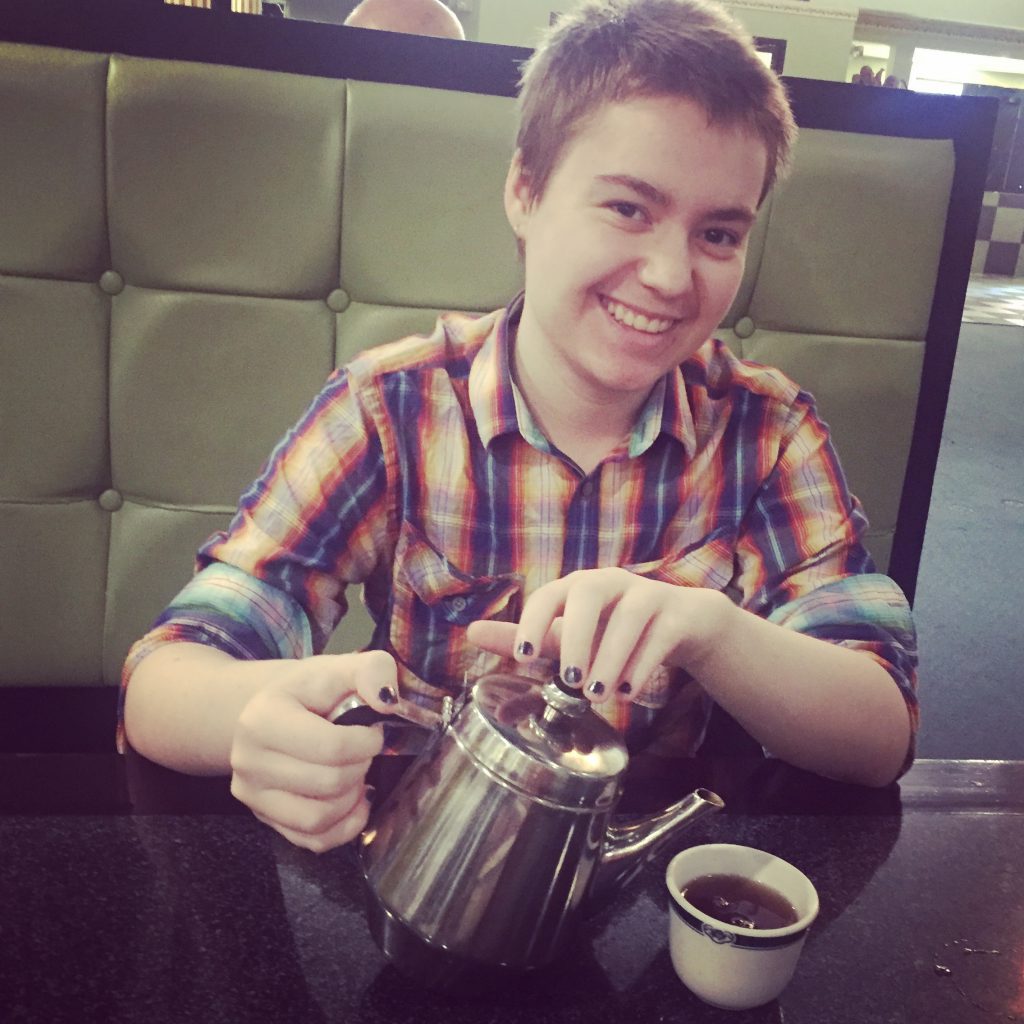 Apologies have not come easy to me because growing up, the adults in my life did not apologize to me (or, as far as I could tell, to anyone else). They sometimes behaved remorsefully, but that is not the same at all. In fact, the remorseful parental behavior is rather damaging: because as a child, your parents’ distress and weakness (feeling sorry for themselves or embarrassed when they erred) will often precipitate a strong sense of your own culpability, and that is hard to recover from. If you are someone who had a childhood like this, my heart is with you. It’s a very difficult experience and it is hard to overcome.

Our dryer broke today but only after I had about eight loads of wet laundry waiting. I search online and find a heating element but in the meantime, we need towels and clean sheets. So at 10 PM I’m sitting on my mother’s couch waiting for a single load to finish; the rest of our wet clothing and linens are bundled into large black garbage bags and rest on her tidy laundry room floor. We always talk about world events and cultural phenomena when I visit with my mother. Tonight I mention the disturbing, disgusting tax breaks our country’s mega-rich receive and my mom interrupts me to angrily hold aloft her popsicle, “Like these! These are half as big as they used to be, and they cost twice as much! It makes me so angry!” I look down at my popsicle – lime flavor, duh! – and I realize, Sonofabitch, this damn thing is smaller. Life’s a bitch. We are in for several  months of absolutely stunning, perfect weather. We’ve had nothing but sunshine and warmth, and delicious soft rains. The daylight lasts well past nine PM and I’m taken back to my childhood and how much I loved those late twilights. During the blue and white, perfect daylight the life springs from the soil and everywhere the scent of green grass and blooms; the peonies we brought in to fill a vase are startlingly redolent with a heady scent. Everything is in bloom and the hot earth is panting and giving forth greenery. It’s beautiful here; I live by the mountains and by the sea. I may travel but I would have such a difficult time living anywhere else.

My youngest son has become irascible and peevish in this last half a year. I’ve parented long enough to not worry too much, But I don’t ignore those kinds of things either: children need interventions when things aren’t going well, when they are struggling. Tonight I made an offhand comment and he took offense; this is happening with relative frequency of late. He comes in the bedroom and lays down next to me I do not say all the things the adults in my life used to say to me. I don’t tell him he has a bad attitude or he’s snotty or selfish. I do not make condescending remarks about puberty or “teen attitude”. It’s a little damned depressing these thoughts even come to mind but, that’s how I was raised. Still, It is ending with me, I won’t parent that way. I won’t treat mine the way I myself was treated. My son holds me and I put my head on his chest. Both kids’ voices are deepening, and they are getting broader through the shoulders and they are taller than I and although we laugh about it, it puts me off track a bit. Impending old age and death, a ways off perhaps but sometimes it doesn’t seem so.

The older child soon creeps in and I hold him a while too. The two children seek me out several times a day. This is why, exciting as my career is, I can’t and won’t work fulltime as long as there are kids that need this. All kids need this. To think when I was pregnant with my first, I worried I wouldn’t have enough love, wouldn’t have what it takes. Well. I have what it takes. Turns out. What surprises me is that every day I can return to that intention, that not one day goes by I’m on autopilot all day. Sometimes I think parenting taught me mindfulness more than any other practice, or tradition, or lecture, or book.

The windows are open and I can feel the sea air and I can hear the trainyard; a sole candle burns on the dresser. The house is quieting although the younglings stay up late; they too are comforted by the long summer evenings, I think. Children of their mother.

We’re at the checkout lane closest to the north door at the supermarket and I turn and ask my oldest child, “Is it time we look into top surgery?” “Yes,” he tells me simply.

Parenting a trans child is amazing. It’s nothing like what I thought it would be. But back in the day I didn’t think anything particularly well-informed or progressive and I didn’t think about it much at all, damn my eyes. Like so many, I was pretty ignorant and (I’m not proud to say) I didn’t see much relevancy in learning more. Since Beeps came out I’ve made up for lost time, sure.

It’s like a gift because, even while we were raising this child as a girl, he still came to know the rules and routines of boyhood and manhood well. You’ve gotta learn that landscape or you risk great peril. It’s a man’s world, damn it all. So Beeps – just like I! – we know well and so much of a man’s way of things. We know their rules and their mores; we know their expectations and agreed-upon codes. We know how to do their laundry and find their haircuts and make their appointments and we know a lot of their body language and their often hostile landscape because unlike men, we couldn’t afford to be ignorant.

But now my child steps away from me, out of the aisle we walked side by side together. They are no longer watching men and caretaking men and protecting themselves – as I do! – they are a young man themselves and they get a little more freedom soon. To see my child reach out and claim this masculine world as their own, it’s indescribable. From those “little” things like his first binder and his shift to different underwear (“These are the best,” he tells me with those tiger eyes and that sedate smile as he pushes the legs of his boxer shorts – fruit prints, cheerful pineapples and lemons – deep into his jeans while dressing. Bent at the waist and efficiently adjusting himself in the same movements I’ve seen his father make and I look away and my eyes sting with tears), to the bigger things like shaving his head; like responding in public when I say, “boys” aloud to the two of my children.

I see those little pains too. He cannot yet enter a men’s restroom due to a (reasonable) fear of violence. We have to make different plans there, when out in public. The T will change that, is changing that – but it’s a process. He is not yet fully in the world or rather the world won’t give him a comfortable place although the world, too, is changing.

So there are some clouds that flit across the sky now and then but most days are absolute joy, it is like a playfield, and the world is very fresh and very special. This afternoon we’re standing in the aisle and examining the men’s deodorants. Names like “Wolfthorn” and “Power Fresh” and “Pure Sport” and “Iced Musk & Ginger”. Beeps is not at all embarrassed about second puberty – quite the opposite, he is frank and forthcoming and impressively educated. But he is and has always been so composed that he might ask for something special and you might miss it, might miss how important it is. And I have to pay a great deal of particular attention.

It’s so strange because when I think about this experience, and what’s ahead of us, I just feel so fortunate and at the same times it feels almost unreal. I guess I’m a slow learner. Or maybe the phrase is: slow to assimilate.

It’s a bigger change than I realized.

My children and I send one another memes all day long in Discord, and today my youngest forwarded one with an implied (and disrespectful) sexual reference. I was surprised and, as he and I thumbed through our phones next to one another, I mentioned my surprise to him. He was confused at my reference; from his comment I could tell he thought the image meant something entirely innocuous. I let the moment pass and I felt a small moment of gratitude.

Every day my children pass where they are safe, as they grow into adulthood, is a day I cherish.

I have for the first time a large enough set of orders I am setting up a waitlist for my works; In doing this I have been fiddling with my professional website and so it’s down at the moment. I think typically I’d feel irritable and anxious at this hiccup; I can’t afford to at the moment. I get up and work work work until it’s time to be with the family. I get my bike ride and my yoga in. I do my volunteer bit. I eat dinner. I clean up. I spend as much time with Ralph as I can. “It’s boring, but it’s my life”. Except, it’s not boring. It’s busy, and I have to make sure to have some mindful moments, and some play moments.

Beeps has a brand-new tablet we purchased thanks to a tax return and a great deal on Craigslist. The damn thing is so big we’ve given up our dining room table so he can do his work there. It’s lovely to have my child nearby and drawing away, even if they are often dug into headphones, they will still laugh aloud at my jokes or comment on my own music. I instruct Ralph to make twice as much dinner as typical, since the boys get up, fiddle on their phones, and then serve themselves large quantities of leftovers. Growing is hard work!

Tomorrow morning I have a Skype date with a pattern designer on jean fit; I hope to also finish the dungarees on my table before diving back into a crepe dress for a local client. I’ve also got to schedule – besides the waitlist for clients – something I haven’t scheduled myself in a good long while: a break.